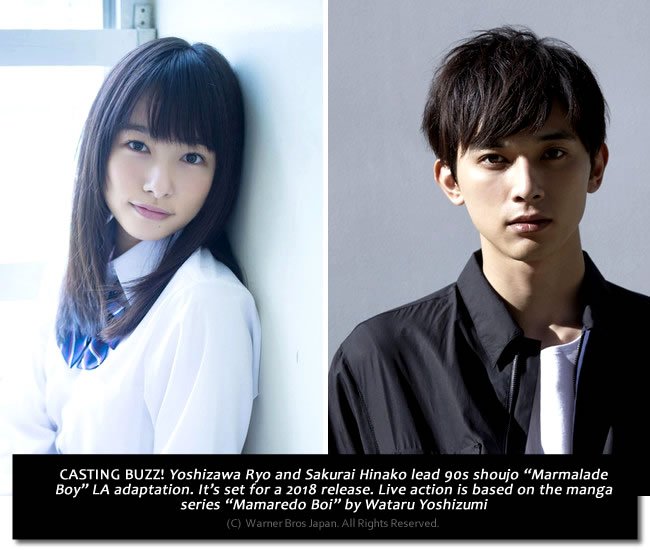 This will be our final casting news for August as we will then celebrate September as our Food month! Yoshizawa Ryo and Mamiya Shotaro are getting some exciting new projects, which both of them deserve! Also in the news are Nino’s food drama film, The Last Recipe, Suda Masaki-Kiritani Kenta movie version of Hibana (Sparks), and Inoue Mao’s new drama at Fuji TV entitled Tomorrow’s Promise.

I recall how Yoshizawa Ryo played second lead to the less talented, but popular Fukushi Sota way back in 2011 in Kamen Rider Fourze, which was followed up by “Boku ga Shokei Sareru Mirai” (“The Future Where I Am Executed”).

However, Yoshizawa (who is under Amuse) did not settle for anything less as he began to accumulate more projects and raves for his performances. Now, with a team up with Nikaido Fumi in River’s Edge, Yoshizawa upped the ante with another prestige role in Marmalade Boy live-action.

Based on the manga series “Mamaredo Boi” by Wataru Yoshizumi, the live-action adaptation will be about:

Miki Koishikawa’s (Sakurai Hinako) ordinary life as a high school sophomore is turned upside down when her parents suddenly announce that they are getting divorced in order to swap partners with a couple they met in Hawaii. They seek her approval of the shocking change, and at a dinner where Miki meets the other couple as well as their son Yuu Matsura (Yoshizawa Ryo), who is about her age, she reluctantly agrees to the arrangement. Yuu, while at first a jerk who takes every opportunity to make fun of Miki, turns out to be fun and attractive, and Miki finds herself falling for him. Little by little, she accepts her new family arrangement and opens up to Yuu as they become friends. Miki and Yuu’s relationship starts to become complicated because of the previous relationships that they had and developed with other characters. These include Miki’s long time classmate and former crush, Ginta Suou, and Yuu’s former girlfriend, Arimi Suzuki. A secondary subplot develops when Miki’s best friend, Meiko Akizuki, herself starts to have her own problems because of the relationship she has gotten into with one of the teachers, Namura Shin’ichi. Throughout the series, Miki and Yuu’s relationship is further developed and tried, influenced by other characters around them and the relationships that they develop with these characters.

Sakurai Hinako is relatively new as an actress. She started as a model and tarento. Marmalade Boy is her second movie, which is quite surprising since she already grabbed the title role for someone so new to the industry. No doubt on Yoshizawa at all.

Amused but not totally impressed, I still look forward to the movie version of Hibana (Sparks) starring Suda Masaki and Kiritani Kenta. I’m not sure if they can surpass the excellent performances of Hayashi Kento and Namioka Kazuki in the drama version produced by Netflix last year. The 10-episode TV drama features a struggling but promising comedian Tokunaga (Hayashi) who was mentored by a senior talent, Kamiya (Namioka). However, Kamiya falls into heavy debt and drinking while Tokunaga – after some successful stints – decided to stop doing comedy and accepts a ‘regular’ job.

Suda will play Hayashi’s role while Kiritani will be the senior comedian who becomes his mentor. The TV drama was excellent due to the acting, and the slow yet revealing and dramatic pace. The production values are also worth mentioning for its quality.

Actor turned screenwriter/director Itao Itsuji will spearhead the movie. I don’t know if that’s good news since I have not seen any of his films yet.

Maggie Lee at Variety offers this review of the drama:

Making people laugh is no joke in “Hibana,” a profoundly reflective and achingly tender look at Japan’s vibrant, cutthroat comedy scene. Adapted from Matayoshi Naoki’s bestseller and helmed by five filmmakers, the 10-episode Netflix Original Series chronicles the decade-long trajectories of two manzai artists, whose careers are strewn with more tears than laughter. Made with an exquisitely cinematic eye “Hibana” is a polished product that targets a discerning audience from among the 190 territories where it aired. [source]

It takes a lot of effort to come up with something substantial and serious, yet entertaining (even hilarious) at the same time. While Suda and Kiritani are excellent actors, I remain “hopeful” that they can elevate their characters into what Hayashi and Namioka did in the drama – a perfect mix of seriousness and comedic flair! The ending scene featuring a “different” Tokunaga is something not easily forgotten…

Based on the novel “Kirin no Shita wo Motsu Otoko” by Keiichi Tanaka, The Last Recipe –  ラストレシピ ～麒麟の舌の記憶～ from powerhouse Toho, features a star studded cast led by Kazunari Ninomiya as a well-respected chef who lost his passion for cooking.

The trailer above features Nino and the cast!

Stay tuned for our Food Month this coming September, as we feature amazing movies, drama, and anime about Japanese food and world cuisine!

The well-respected counselor had a curious interaction with a male student who refuses to attend his classes. He also declared his love for the counselor. The following day, he was found dead. Hinata is then tasked to investigate and find out what happened to the boy.

Hijikata, as a director has established a good reputation throughout his career. Among his projects are Ghostwriter (with Nakatani Miki) and The After-Dinner Mysteries (Sakurai Sho). He debuts as a director in 1997, so Inoue and her drama are in good hands.

Also in the cast are Kudo Asuka, Shinkawa Yua, and Oikawa Mitsuhiro.

Inoue was last seen in the NHK taiga Hana Moyu back in 2015. Her last movie was The Snow White Murder Case [read our movie review here] for which she was again nominated for Best Actress. She won her first Best Actress trophy at the Japan Academy Prize for Rebirth in 2012.

I’d love to watch Inoue in another heavy drama, but this show – with the suspense/mystery theme due to the boy’s death – may be the better option for now. Inoue has been on the sidelines for months already, while Mitsushima Hikari (her co-star in Ohisama), Aoi Yu and Matsu Takako have been very active in both movies and TV series.

I’m inviting you to read our article on the acclaimed actress: Why Mao Inoue is the best actress of her generation here.

Mamiya Shotaro is on a roll! After playing one of the leads in Tori Girl, he headlines Death Row Family. The new project is all about a 4-member family who are in financial ruin. They devised a plan to rob a family engaged in loan shark operations. Things got out of hand when they killed one member of their target family. Chaos ensues…

As previously mentioned, it’s only a matter of time that he’ll get the main character role and here it is!