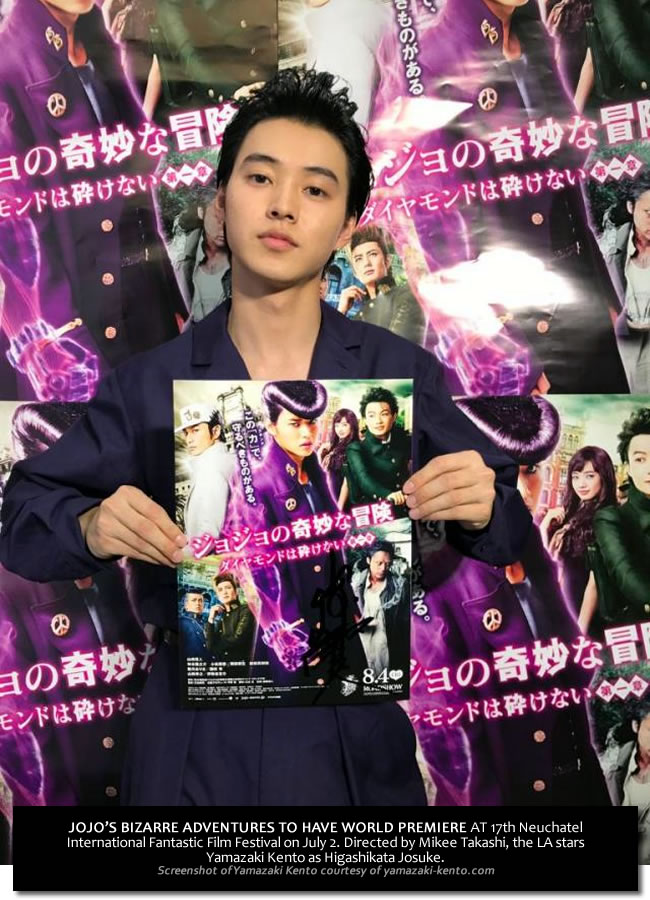 Yamazaki Kento’s much-anticipated LA Jojo’s Bizarre Adventures: Diamond Is Unbreakable: Chapter 1 is set to premiere tomorrow, July 2 at 17th Neuchatel International Fantastic Film Festival. The Asahi Shimbun reported that despite initial impressions that the anime is deemed ‘impossible to turn into a live-action’, having Mikee Takashi as director proved to be a turning point.

The film is based on the fourth story arc of the long-running manga by Hirohiko Araki, which started serialization 30 years ago. It currently spans more than 100 comic book volumes with more than 90 million copies in print. The “Diamond Is Unbreakable” arc was also adapted into an animated TV series in 2016. [read more]

The movie will open in Japan on August 4th.

kentosubs also uploaded the video below of Yamazaki talking about the movie and some interesting personal-related answers to his interview.

What I find interesting in the informal interview are many:

1. Kento has a particular work habit in that he seriously analyze the implications of his character with other elements in the movie. Since the final scenes will show his ‘interaction’ with special effects – (i.e. the stands), he wanted to be aware of their presence and make sure it translates into his scenes;

2. Filming in Spain gave him the opportunity to become closer to his co-stars, Kamiki Ryunosuke and Mackenyu. They dined together and play soccer.

On a personal note, someone just told me that recently a Russian site talks about this blog complaining about the multiple coverages of Yamazaki Kento while ignoring other “more talented” actors. Amused to note that someone accused me of kissing one particular actor’s ass. Ahh, commenter singled out Yamazaki and Furukawa Yuki as preferred actors of this site, so I did kiss more than one ass.