It took more than two years before Takasugi Mahiro (高杉真宙) resumes movie acting in Nakagawa Taishi’s starrer Re: LIFE. His 2014 movies, Bon Lin and The World of Kanako gave movie fans plenty to celebrate  – here we have an actor equally capable of playing horrible and kind-hearted characters –  so why it took him so long to play more movie roles?

While reading his 4-page interview at Elle Japan, I got the impression that the actor is living a simple life. Born and raised in Kyoto, Takasugi will turn 20 on July 4th. The article went on to described his father as a traditional crafts maker and that he lives with him and his older sister. 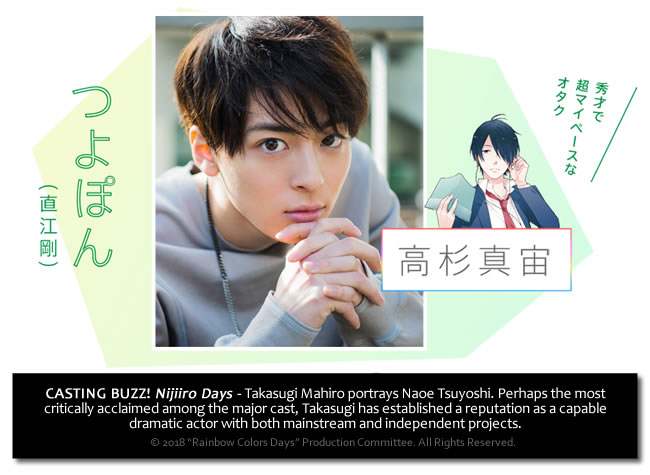 Nijiiro Days or Rainbow Colored Days, the popular shojo manga, written and illustrated by Mizuno Minami will have a live-action movie slated for 2018. The main roles were already cast and they are Takasugi Mahiro (as Naoe), Sano Reo (Hashiba), Nakagawa Taishi (Matsunaga), and Yokohama Ryusei (Katakura). [read full article]

On acting, Kobayashi Keiichi, Bon Lin’s director, was said to be quite impressed with Takasugi’s performance. The director’s new film, The Time of Backlights (Gyakko no Koro), has the actor playing the main role again. The film also reunites Takasugi with Angel’s Knife co-star Shimizu Hiroya. It would be their 3rd projects together, following Koko Nyushi (Fuji TV / 2012).

Takatoyo Akada (Takasugi) is a high school student, born and raised in Kyoto. He has feelings for Mikoto (Aoi Wakana), whom he has known since their childhood days. During his ordinary daily life, he has uneasy emotions and grows up slowly. Based on the manga series “Gyakko no Koro” by Katsuki Tanaka (published from 1988 to 1989 in Japanese seinen manga magazine Comic Morning). Filmed in Kyoto, Japan and took one and half months to complete.

… becoming more and more evil is quite fun. Having to think outside of everyone’s line of thought and having two faces was quite difficult, but having a chance to do many things is fun. [source]

He was certainly notorious in The World of Kanako (yes, he’s the guy who got dumped in a body bag with his innards cut open) and made Nakatani’s life in Ghostwriter more miserable than it already is, but Takasugi is equally successful in playing kind-hearted, bullied characters just like in Bon Lin where he won the Best New Artist award at the Yokohama International Film Fest.

Playing movie and drama characters that are the extreme opposite of the real Mahiro may be the driving force behind his passion for acting.

Projected future top performances: The live-action movie of Nijiiro Days as Tsuyoshi appears to be his biggest movie role so far. Also, noteworthy: As Akada Takatoyo, the main character in The Time of Backlights – Gyakko no Koro, his second collaboration with director Kobayashi Keiichi. As Hironobu in The Longest Picture In The World, another major project.

It’s funny how his co-stars (Yamazaki Kento, Suda Masaki, and Nomura Shuhei) in the TV drama 35 sai no Kokosei teases him about being ‘shy’ and ‘pure’ and ‘cute’ among others:

–Then next, what about Takasugi-kun?
Suda: Mahhii is too cute!
Yamazaki: He’s sincere and pure and earnest…
Suda: I even want to make “Today’s Mahiro” corner and write about it on my blog every day. Even today, he slept like this on a chair *doing a sit gesture with his legs together*.
Nomura: Also, he’s very shy isn’t he?
Suda: There’s this “Even though Saori is kyawatan~” line in the scenario for ‘Wakamono Kotoba’ and everyone was having fun saying it. I asked him “Mahhii, do you want to do it too?” and he said “I want to do it”, so we both stood up. But…
Nomura: He suddenly went “Ah…. *blushes*” instead. He was too embarrassed to say the line.
Nishii: He was so cute that time~
Yamazaki: Also, the gap between Mahiro-kun and his role is so great for this dorama. Even though in reality he’s this pure, Ren (his role) is a super delinquent after all.
Katoono: That’s right. The gap is really amazing!
Suda: It’d be great if everyone who watches this dorama can enjoy that gap.
Takasugi: Yes! But to be called “cute” this much makes me very embarrassed right now. *blushes*

As a Kamen Rider cast, Takasugi established a reputation for his acting ability to play a difficult role. While he is regarded as one of Japan’s handsome actors, in “Masked Rider Armature”, Takasugi made an impact by showing a full range of emotions – betrayal, conflict, and the capacity to be cold and cruel toward others.

He is known for his role as Mitsuzane Kureshima/Kamen Rider Ryugen, from Kamen Rider Gaim.

He was scouted while attending a fireworks display in Kumamoto Prefecture.

His film debut was in Hanjiro. while his first starring role in a film was Quartet! in 2012.

He likes to read girls’ manga.