Based on the popular manga series “Little Forest” written & illustrated by Igarashi Daisuke, Little Forest: Summer and Autumn is the first installment of the 2-part live-action adaptation written and directed by Mori Junichi. Starring Hashimoto Ai in the title role of Ichiko.

It tells the tale of a young woman who left the big city to settle back in her small hometown Komori, located on a mountain in the Tohoku region. It may be a temporary transfer for Ichiko, as she lives with nature while trying to reflect on certain life events that led to her hometown journey.

The town’s name Komori is translated to ‘little forest’, Ichiko explains. She notes further the humidity since it’s located at the bottom of a mountain basin, thus there is a damp and sweltering heat during summer. As the title suggests, it covers both summer and autumn, with each season featuring dishes prepared by Ichiko using local ingredients. As each dish is prepared, Ichiko also reveals a bit of herself.

The Summer season began with the planting of rice. Ichiko also bakes bread, followed by amazake or rice sours. We are also introduced to one of Ichiko’s neighbors and friend, Yuta (Miura Takahiro). Ichiko invited the young man to share and enjoy the amazake.

The third dish – silverberry jam – is a trip down memory lane as Ichiko talks about a recent relationship with a young man that turned awry. It’s like the fruit itself, which is sour until it ripens to offer its unique sweetness. The next two dishes – Worcestershire sauce and Nutella – are related to her Mom (Kirishima Karen) who left without explaining why. 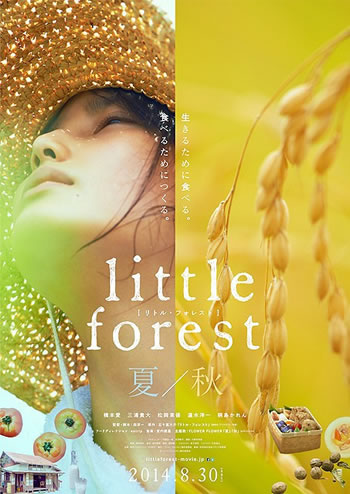 Ichiko is isolated, except when Yuto, Kikko (Matsuoka Mayu) and her elderly neighbors visit her on occasion.

Autumn arrives while gathering the Akebi fruit – it’s considered a mysterious and beautiful fruit native to the north of Japan. It also brings back childhood memories, associated with Kikko (Matsuoka).

While Little Forest has no particular sequence or order, it remains one fascinating slice-of-life and coming-of-age movie, with a special focus on Japanese food.

Ichiko represents the modern Japanese woman – fiercely independent and capable, willing to adjust to both emotional and physical changes. Little Forest is both a spiritual and a culinary journey of a young woman who has come to appreciate nature, yet still trying to find herself and her place in the world.

Hashimoto Ai has built her acting resume with memorable and award-winning roles, including Control Tower, The Kirishima Thing, Another, Confessions (her debut movie), and The World of Kanako. In Little Forest, she was – again – at her finest. As Ichiko, she conveys a variety of emotions as she ‘escapes’ the big city and seeks refuge from her provincial hometown up in the mountains.

Director and writer Mori Junichi made his debut film in 2002 entitled Laundry. It won the Sundance/NHK International Filmmakers Award in 2000, one of four winners selected from approximately 3000 applicants. His attention to details is very apparent in the movie – showcasing the well-presented dishes, featuring the beauty of the location while his actors demonstrated mastery of their characters.

Japanese restaurant Eatrip is responsible for the presentation of the dishes. Described as the ‘Garden of Eating’ it’s owner, Nomura Yuri has a

… background in design and media. She networks with farmers, bakers, food producers, and winemakers, showcasing them at the restaurant or in outside events. Nomura emphasizes farm-fresh organic produce generally served in a light Mediterranean mode, based around locally sourced, predominantly Japanese ingredients and home-made seasonings.” [source]

While there are no cooking techniques particular to world-renowned chefs, the practical and simple approach to cooking is best exemplified by Ichiko in her dishes. A foodie lover or a nature lover will surely appreciate this film. Clocking at 111 minutes, Little Forest: Summer and Autumn is a cinematic experience that can make you hungry while reflecting on life, nature, and family.