The film is set during the Edo period but confined within the Kaga domain. Ruled by the powerful Maeda clan, Samurai Cooking brings to life the Funaki family and their invaluable services by way of cooking.

The film’s title in Japanese is 武士の献立 – literal translation puts it as Warrior’s Menu and A Tale of True Love and the movie is both. Starring Ueto Aya as Haru and Kora Kengo as Yasunobu, they play a couple brought together by ‘delicious circumstances’.

Haru is a lowly maid who was rejected by her first husband for being ‘impertinent’, but the lovely bride is also an excellent cook. Yasunobu is a gentle, yet politically naive samurai known for his swordsmanship rather than his cooking. He is the second and youngest son of the Funaki family. He was forced to join his father in serving the Maedas after the death of their firstborn. 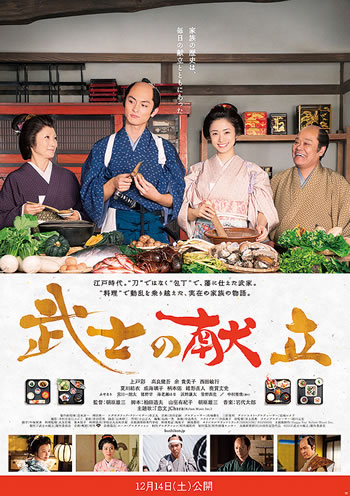 The young groom was tentative and cold to her, describing one of her dishes as “a bit salty”. She later discovered that Yasunobu was heartbroken.

Haru’s ‘impertinent’ reputation resurfaced during an argument with her younger husband, leading to a cooking battle. Of course, she won but gained the title of ‘Vixen’. Haru has grown to love Yasunobu but he remains distant, yet they share a common passion for food.

During this time, there is much discontent among young samurai which led to a violent and bloody outcome. While Yasunobu climbs to a prominent position in the Maeda household, his political leanings almost cost his family their fortunes and future.

After playing an assassin in her most famous movie Azumi, Ueto Aya has concentrated all of her efforts in doing plenty of TV dramas. Aside from the box office hit Thermae Romae, her role as Haru is an acting highlight. Many may consider her role in Hanzawa Naoki as a career best, but Samurai Cooking proves that Ueto can do understated, subtle acting as well.

Two years her junior, Kora Kengo plays the reluctant kitchen samurai. The fact that he started as a male model and was cast to play the lead in The Story of Yonosuke, one of the best Japanese movies in recent years, is always a side note I never fail to mention.

Yo Kimiko and Nishida Toshiyuki are two of Japan’s most beloved veteran actors and were perfect as the parents.

As one of the Maeda rulers, Kaga Takeshi, the host of the famous TV cooking battle show Iron Chef, was a wonderful addition to the cast.

Much of the film’s success can be attributed to the screenwriting-directorial team of Asahara Yuzo, Inoue Masanori, Kashiowada Michio and Yamamuro Yukiko. Without the grandiose battles often seen in Kurosawa movies of yesteryears, Bushi no Kondate remains an intriguing and fascinating samurai film with a superb gastronomical theme.