There are plenty of casting news featuring Japan’s more established actors, including Tsumabuki Satoshi, Eita, Mitsushima Hikari, Aragaki Yui, and Ikuta Toma. This post is dedicated to their new movies and TV drama and more!

One Hitoshi’s latest project – Okuda Tamio ni Naritai Boy to Deau Otoko Subete Kuruwaseru Garu – features the unlikely ‘team-up’ of Tsumabuki Satoshi and Mizuhara Kiko as ‘lovers’ or are they?

The story centers on Kōroki, a 35-year old man who uses the life of Japanese singer and songwriter Tamio Okuda as a guide for his own life. He works as an editor at the lifestyle magazine “Mare,” where he meets Akari Amami, a mischievous fashion press writer, and falls in love with her at first sight. The manga chronicles the joy and sadness of his relationship.

It’s quite obvious why Tsumabuki’s character, Koroki, will suffer a ‘living hell’, just watch the trailer below. The poster is, in itself, also indicative of what life would be for the 35-year old Okuda Tamio admirer and office worker, and into Amami Akari (Mizuhara) season.

Says Odagiri of his Korean co-star:

As you know Jang Dong-Gun is a good actor. While acting together I could tell he was also considerate. I felt we understood each other well. If I were a woman I would have a crush on him. Actually, as a man, I felt enough to have a crush on Jang Dong-Gun. I think, same as Jang Dong-Gun, that the language thing was no problem. [ source ]

Tsumabuki teams up with Ha Jung-Woo in Kim Young-Nam’s crime-thriller No Boys, No Cry. Tsumabuki’s co-star in Fly with the Gold is Shim Chang-Min, who plays a North Korean spy.

Tsumabuki’s co-star in Fly with the Gold is Shim Chang-Min, who plays a North Korean spy.

Our hitlist on Japanese-Korean co-productions soon!

Now, Suda Masaki joins the list of Japanese actors who teams up with Korean talents! He’s doing a two-part movie with award-winning actor Yang Ik-June entitled Wilderness (Part 1 and 2). Suda Masaki plays Shinji, a troubled youth who just returned back from a juvenile detention facility, while Barikan is an extremely shy and stuttering fellow who has no friends. They have one thing in common – boxing and due to the sports, they became friends. What follows with test their friendship and their resolve to join the sport.

Director Kishi Yoshiyuki debut film was Double Life, starring Kadowaki Mugi, with Suda Masaki playing her boyfriend. Wilderness, Part 1 is his second full-length feature, which he co-wrote with Minato Takehiko, a screenwriter who is credited for such movies as Bitter Honey (Nikaido Fumi), Natsumi’s Firefly, and The Centenarian Clock, among others.

Yang Ik-June, a well-respected actor in South Korea wrote, directed and acted in Breathless (Ddongpari), his most acclaimed film where he won acting awards. The movie also participated in numerous international film festivals. He has a history of acting in both Korean and Japanese films.

Suda Masaki remains one of Japan’s busiest young actors – with back to back projects for movies and TV series. His role as a juvenile delinquent is perfect casting! The trailer above is meant to excite fans and moviegoers to anticipate the 2-part movie installment. Acting showdown between Ik-June and Suda are to be expected.

That short trailer is one of the best I’ve seen – the complexity of both Ik-June and Suda’s characters are already worth the price of admission. I hope this movie is released internationally soon!

Aragaki Yui joins Eita in a sports-drama entitled Mix helmed by April Fools’ director Ishikawa Junichi. While the casting news was weeks ago, more details about the movie were only reported a few days ago by Japanese entertainment sites. 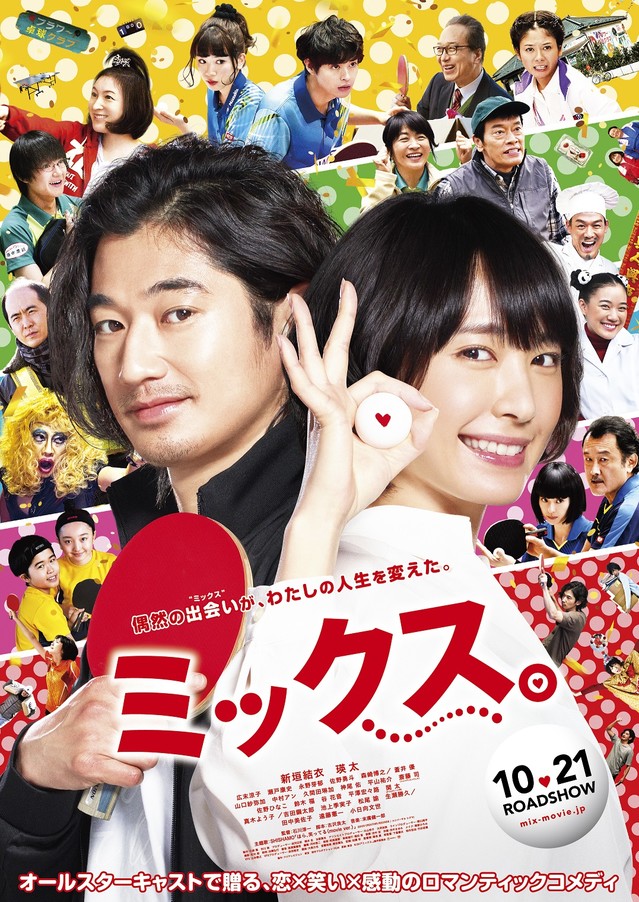 Mix is about revenge and using sports to bring out the best in people. Tamako (Aragaki) used to be a table tennis prodigy. It was her Mom who pushed her to learn the sports and become highly competitive. When her mother died, Tamako lost her passion for playing. At 28 years old, she is an ordinary employee with a playboy boyfriend (Seto Koji) who also plays table tennis. Life got tougher when she caught her boyfriend cheating on her. To pick up the pieces, she went back to her hometown with the intention of reviving the table tennis club her mom used to manage.

To pick up the pieces, she went back to her hometown with the intention of reviving the table tennis club her mom used to manage. She met Hisashi (Eita) who is a neophyte player. The young guy met the same fate as her – he got dumped! To exact revenge, she trains Hisashi and they join the mix doubles competition, setting her sites to exact revenge on her ex. 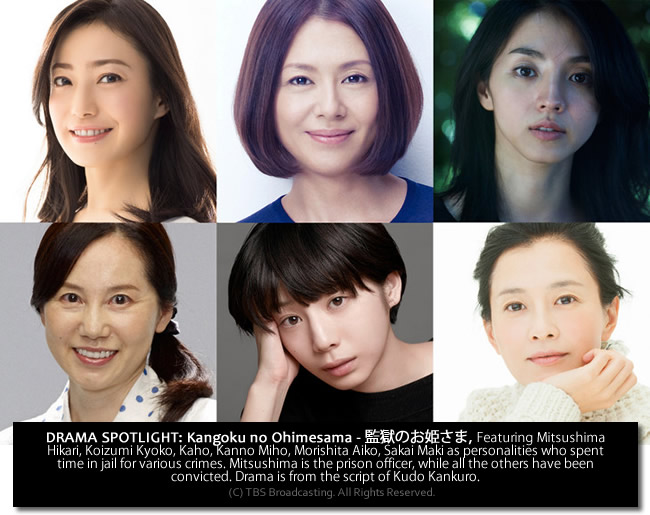 Five women form a bond inside the prison. Later, they discovered that one of them was wrongfully convicted. They hatch a plan to seek revenge for and on behalf of their friend. A prison officer (played by Mitsushima Hikari) made a difference in these women’s lives by providing them with lessons on inmate survival.

Koizumi Kyoko won Best Actress in Kurosawa Kiyoshi’s Tokyo Sonata and is a regular mainstay in many Japanese TV dramas. But her acting resume involving full-length films is quite impressive as well – Hanging Garden, Kaasan Mom’s Life, Adrift in Tokyo, Mother Water, Penance, and What the Snow Brings among others.  As one of the prisoners in this new drama, she is expected to bring on her A-game and we’re in for a real treat.

Mitsushima Hikari, in my opinion, is perfectly cast as the prison officer. Her list of movie and drama roles are also formidable.

With Kudo Kankuro writing the script, this drama is already on my list as one of the most highly-anticipated for the coming season. 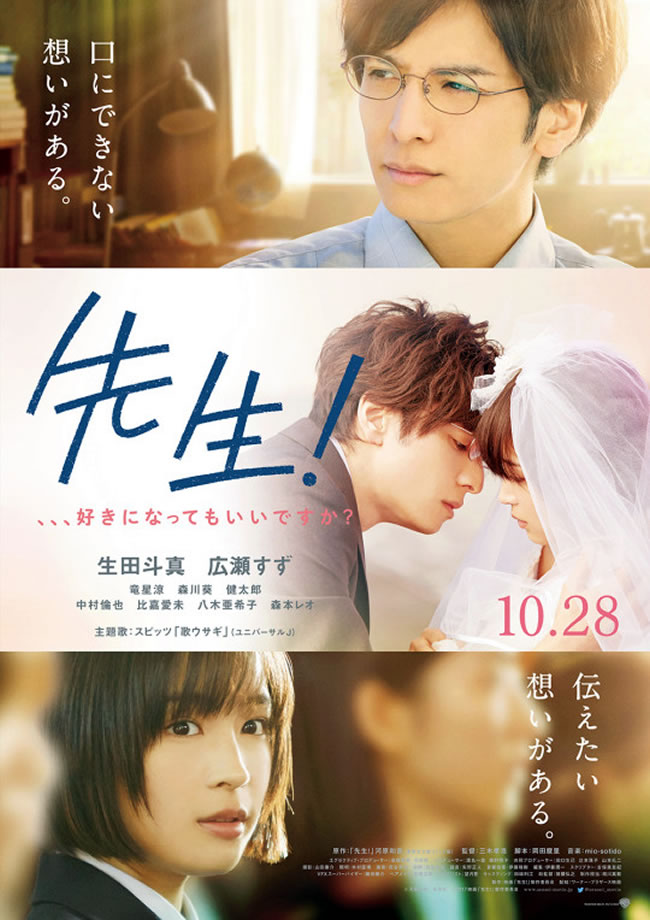 Kosaku Ito (Ikuta Toma) teaches world history at a high school. He looks inflexible, but, in fact, he has a warm heart. Hibiki Shimada (Hirose Suzu) is a student and she has a crush on Kosaku. She has never had a boyfriend before. Due to being young and naive, she is honest to Kosaku about her feelings. Kosaku though is unable to express his feelings freely due to his position as a teacher. [source]

Which movie or drama are you excited the most? Let us know what you think!