Written and directed by first-timer Kanai Junichi, under Stardust Pictures, Yurusenai Aitai – ゆるせない、逢いたい (translated into English as ‘Again’) is about the romantic relationship between Hatsumi (Yoshikura Aoi) and Ryutaro (Yagira Yuya) that turned ugly.

Released in 2013, I’m fortunate to screen this film even after four years because of the cast (the amazing Yagira Yuya!), and the serious theme of the movie.

Date rape describes a form of sexual assault that occurs when the perpetrator has an established social or romantic relationship with the victim. Date rape may involve forced or coerced sexual activity or take place when an individual cannot give consent to sexual activity. Like other types of rape, date rape may be motivated by a desire for power or control and/or by an individual’s feeling that sex is owed to them. [source]

Introvert, yet pretty Hatsumi has turned to track and field to brighten up her monotonous and uneventful life. After the death of her father, her relationship with her mom is tense and shaky. She demands that Hatsumi only focuses on the upcoming collegiate entrance exam and nothing else. Hatsumi disagrees.

She then met Ryutaro, an unpredictable and volatile yet charming (to a fault) 18-year old waste collector. The young man was unfriendly, almost exhibiting an animosity towards her, but it all changed when they began making conversation. Ryutaro has no relatives and follows his guardian’s strict work routine. While Hatsumi is lonely, the young man has little regards for his future.

Soon, they were inseparable and they fell in love.

But tension at home remains, further aggravated by her late returns until she could not make any more excuses. Her mom suspected the worst. Unable to contact Hatsumi, Ryutaro also assumed the worst.

When the girl finally made contact, the young man forces himself upon her. 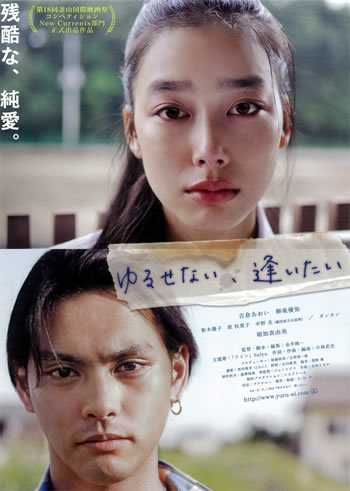 Known in Japan as an acclaimed director of short films, Kanai could have opted to make his debut a revenge flick, but instead, offers a better alternative – Yurusenai Aitai expounds on the victim’s raw and conflicting emotions until that person can finally deal with the tragic event and face her attacker whom she still loves so dearly.

Yurusenai Aitai is straightforward, yet it tackles complex issues, without being preachy or forced. While the first half centers on the flourishing romantic relationship between our main actors, the last half is a legal drama that is intensely emotional.

Yoshikura Aoi who plays supporting characters in such drama as Pin to Kona and Gakko no Kaidan impresses as Hatsumi – pouring her heart out during the tense confrontational scenes with Yagira. Asaka Mayumi, who plays her lawyer-mother is equally dramatic.

With less screen time, Yagira has enough scenes to turn an equally impressive run as the wild and insecure Ryutaro. I have come to the conclusion that his excellent debut in Koreeda’s Nobody Knows is due to how he expresses himself without words. Yagira is an effective actor when he deals with less dialogue, allowing his eyes and body language to express his feelings for him. This is also evident in his more recent film, Mariko Tetsuya’s Distraction Babies and even in the historical drama, Gassoh.

After a considerable amount of time reflecting on why the movie title is translated as ‘Again’, I began to realize that it’s about facing each other for one final time – and then moving on.