Tokyo Sunrise, a film about the close friendship between Ren (Taiga) and Kaoru (Kobayashi Ryuju), is subtle and powerful in its depiction of a brotherly love that may be more than what it seems.

Written and directed by Nakagawa Ryutaro under Tokyo New Cinema, the movie encompasses the slice of life genre due to the mix of certain story elements that makes it part road trip, part romance, and part mystery.

Ren and Kaoru have been roommates for years. While both are single, Kaoru is in a serious, romantic relationship with Risako (Kurokawa Mei). The trio could have maintained the status quo but Kaoru decided to transfer from Tokyo to Osaka, thus he admits having a long distance relationship may not work for him and his girlfriend.

The film opens with the send-off party for Kaoru and we became aware that his relationship with Risako is over. Ren appears dejected, obviously since his friend is leaving him behind.

Fast forward a year later, we discovered that Kaoru has passed away and that his parents asked Ren to do them and their dead son a favor. It seems Kaoru is infatuated with a girl no one else knows. Further investigation reveals the girl is Kaoru’s classmate in a far-off place. With a sketch of the girl’s face drawn by his friend, Ren drives to seek her out…

Director Nakagawa has established a reputation among emerging young Japanese filmmakers. His name has been celebrated in film festivals, including Boston and New York and his work has competed at Tokyo International Film Festival, at the ‘ripe’ age of 25.  His dramatic films – diverse and challenging – are all about young people facing different life-changing situations.

Tokyo Sunrise, while still a drama, departs considerably from his previous efforts in that it explores the deep bond between two young men. While the story hints of brotherly affection, it remains to be seen if both are sexually attracted to each other. Instead of revealing what each man feel, the movie offers hints through snippets – random moments of intimacy.

The friendships we do have with other guys tend to have much less emotional intimacy; there is less closeness, less willingness to share about ourselves, and far less trust. We may help each other move and wax rhapsodic about our favorite types of whiskey but we don’t let ourselves get any deeper than the surface level. And yet… that’s exactly what we crave. [source] 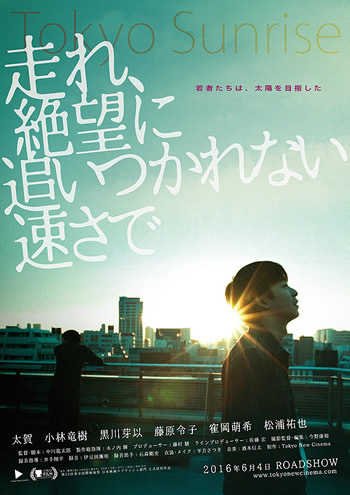 The above quote applies to Western white male, says the author, but it does apply to Japanese men as well, perhaps even more. That same craving intensifies in the case of Ren and Kaoru since one of them passed away. What goes through Ren’s mind is confusion, disappointment, and anger. How could Kaoru keep the girl a secret?

You see, Ren felt ‘safe’ even when Kaoru began to date Risako. At least, they still live in the same dormitory room – sleeping on a double deck bed, one on top of the other.

The movie stops short of becoming a love triangle, and it would have been a big letdown if it followed that route. Instead, it kept the audience guessing, which makes it more potent, more appealing, more heartbreaking.

If I had not the opportunity to watch this film, I would still consider Taiga’s performance in Fukada Koji’s “Au revoir l’ ete” as his career’s best, but as Ren, he has outdone himself.

Kobayashi Ryuju as Kaoru and Kurokawa Mei as Risako were both commendable actors too, but this is Taiga’s movie from the word go. There are actors who are so gifted that both fans and critics look up to them – Yagira Yuya and Sometani Shota come to mind – Taiga also gave his A-level here in as much as the two award-winning actors.

I have yet to fully explore the Japanese indie scene, but if I am to rely solely on director Nakagawa, then I would be looking forward to some more.