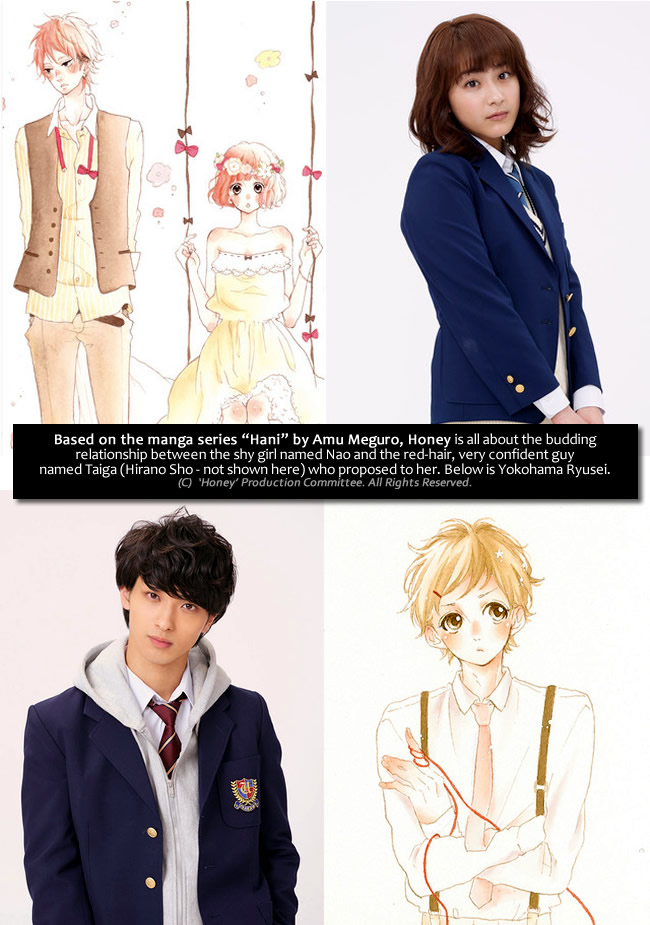 Two live action movies that deal with young romance and heartache grab the headlines for our first June 2017 casting buzz – Anthem of the Heart and Honey. Nakajima Kento, Yoshine Kyoko are cast to play the main characters of Kokoro ga Sakebitagatterunda (心が叫びたがってるんだ。) where the title can also mean ‘Where the Heart Wants to Shout’, aside from the more well-known ‘Anthem of the Heart’.

The anime was released in 2015 by Aniplex and centers on a young girl named Naruse Jun who is regarded as a ‘chatterbox’. All things changed when she blurted out something completely accidental yet shatters her family to pieces.

The official anime website has the story in summary below:

Jun Naruse is a girl who carries the guilt of breaking up her family with the words she carelessly uttered when she was young… Suddenly, a mysterious “Egg Fairy” appears in front of Jun and casts a curse on her so that she can never hurt anybody with her words. Jun’s ability to speak is sealed away: every time she tries, she feels a pain in her stomach. Traumatized by this experience, Jun hides her feelings deep inside of her heart, turning to e-mail messages on her mobile phone as her sole means of communication.

Jun is now a second year high school student. One day, her homeroom teacher appoints Jun and three other students as members of the Regional Friendship Exchange Executive Committee. As it turns out, the appointed group is a rather unexpected mix of students. Other than Jun, the members of the Committee are Takumi Sakagami, the burn-out who never speaks his true intentions; Daiki Tasaki, the former baseball team ace who failed his run at the Championships due to an injury; and Natsuki Nito, the cheerleader and honor student who has some concerns about her love life. They all suffer from emotional trauma just like Jun. [source]

The live-action adaptation, which is also under Aniplex, has just released a trailer. While we have yet to fully understand the ‘complete picture’, it is clear – at least based on the trailer – that the focus of the movie remains with Naruse (Yoshine Kyoko) with Nakajima Kento playing the other main lead. As Takumi, Nakajima’s character is that of a young boy who has little social skills. As awkward as it may seem, these two young students will try to command the committee and come up with a musical program that will make their school proud and the audience happy and entertained.

Nakajima Kento has impressed me previously in Silver Spoon with his comedic skills. I think it’s fair to say that he’ll do justice to his role here. Ishii Anna and Kanichiro appear to be solid supporting actors at this point, with Ishii having to play plenty of supporting characters even though she could take the lead role anytime. Her performances in Solomon’s Perjury and the more recent Your Lie in April prove she has the acting chops. I am a bit skeptical of Yoshine since she was all over the place in the drama Omotesando Koukou Gasshoubu!, but she has done a few more movies and drama after that, so I’m hoping she has improved a lot.

The other characters – Tasaki (Sato Koichi’s son Kanichiro) and Natsuki (Ishii Anna) – also showcase emotional stories of their own, with Tasaki injured and failing in baseball, while Natsuki has her own struggles with love and relationships.

While it may be known as Honey So Sweet, it’s actually entitled simply Honey (Hani) by author Amu Meguro. The live-action movie of the same name stars Hirano Sho and Taira Yuna as the main leads.

Little did Nao Kogure realize back in middle school that when she left an umbrella and a box of bandages in the rain for injured delinquent Taiga Onise that she would meet him again in high school. Nao wants nothing to do with the gruff and frightening Taiga, but he suddenly presents her with a huge bouquet of flowers and asks her to date him—with marriage in mind! Is Taiga really so scary, or is he a sweetheart in disguise? [source]

Also this week, the live action Tokyo Ghoul had a major buzz when the producer, director and main star (Kubota Masataka) face the press in the movie’s worldwide promotion show.

In case you missed it, the Tokyo Ghoul live-action movie will indeed be premiering at #AX2017!

Among the interesting segments: the reaction of Kubota Masataka about his casting and how he felt ‘honored’ by being chosen personally by the writer of the manga itself. Shochiku – the film outfit behind the production – is also quite confident that the live action will be successful, hence they are already planning to release the movie across many countries, including the United States, the UK, and Asia, including the Philippines, Malaysia, Singapore, Thailand, and China.