Rikuoh – 陸王, based on Ikeido Jun’s novel of the same title, is at the forefront of a nationwide effort to promote sports. The 2020 Olympics also known as Tokyo 2020 is 33 months away, yet Japan is already anticipating the huge event by introducing sports-themed movies and drama.

Furuzawa Katsuo, known for his grandiose epic-scale drama such as Hanzawa Naoki, Roosevelt Game, and Shitamachi Rocket, is a TBS regular and is an obvious choice to direct Rikuoh. Is the storyline up to the director’s liking? I would think so…

Koichi Miyazawa works very hard at his job as the fourth president of an old prestigious manufacturer of tabi, Japanese split-toed socks, but as demand for tabi declines over the years, he spends his days worried about the company’s finances. After a discussion with a banker, he starts to think about starting a new business venture. This isn’t because he wants to make his company larger than it is, but rather because he’s worried that the fate of the company itself may be at stake. Using the craft and skills that have been honed creating tabi, he endeavors to develop running shoes that approach the sensation of running barefoot. But that’s a task more easily said than done for a small local company with just over 20 employees. Will they be able to successfully make running shoes?! These workers, who have worked diligently producing just a single product, use their strength of companionship to propel themselves to take on this once in a lifetime challenge! [source]

Think of a senior, veteran actor who has won numerous awards and can still capture the imagination of many Japanese? Watanabe Ken is probably one name, perhaps Asano Tadanobu? How about Abe Hiroshi? But then again, who was that Japanese actor who killed his wife and her lover in Imamura Shohei’s The Eel? [The film won the Palme d’Or at the 1997 Cannes Film Festival and Kinema Junpo’s Award for Best Film in 1998.]

Yakusho Koji, of course! While Sakai Masato previously held the title as the larger-than-life lead of Furuzawa’s Hanzawa Naoki, the grand-scale demand of Rikuoh’s titular character is beyond Sakai’s reach. 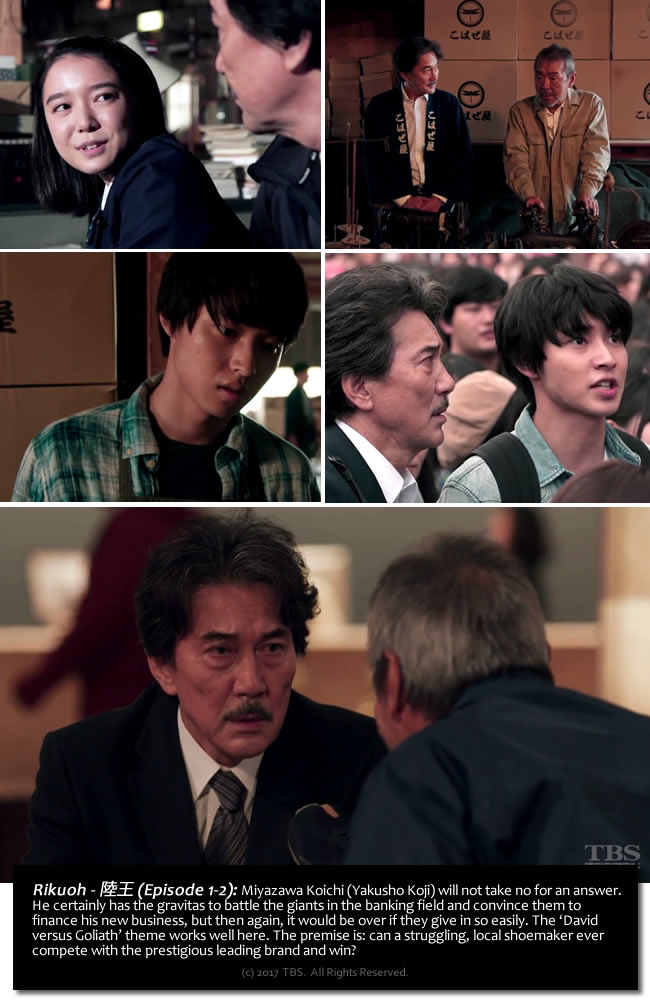 Who should play his son then? Someone who has potential Tv ratings draws and at the same time with enough oomph to do dramatic and comedic roles, not necessarily ‘critically acclaimed’, yet charismatic? Yamazaki Kento. No argument on that.

Now, think of another young actor (not necessarily belonging to Kento’s batch) who has the physique, the stature, and most probably the stamina to play a marathon runner? Takeuchi Ryoma. No argument on that either.

And so you got three of the main characters cast. Since there are also casting requirements for Yakusho’s family and production crew and a few villains here and there, we have Kamishiraishi Mone (Koichi’s daughter), Terao Akira (yes, our music teacher from Aogeba Toutoshi), Kazama Shunsuke (a sympathetic junior account executive), and Uchimura Haruka (loyal crew and assistant), among others to join an extensive cast.

The Japanese athletic shoemakers are well respected for its use of modern technology, as well as for their aesthetic and functional designs. While the running shoes developed by Rikuoh has a fictional brand name of its own, let’s have a look at some famous brands: Asics is ‘anima sana in corpore sano’, which means, a healthy soul in a healthy body. Their running shoes are built with the GEL technology. | Mizuno began in 1906 in Osaka and has since developed such technology as the parallel and infinity wave. Infinity is boasted to absorbing and dispersing the impact at foot strike. 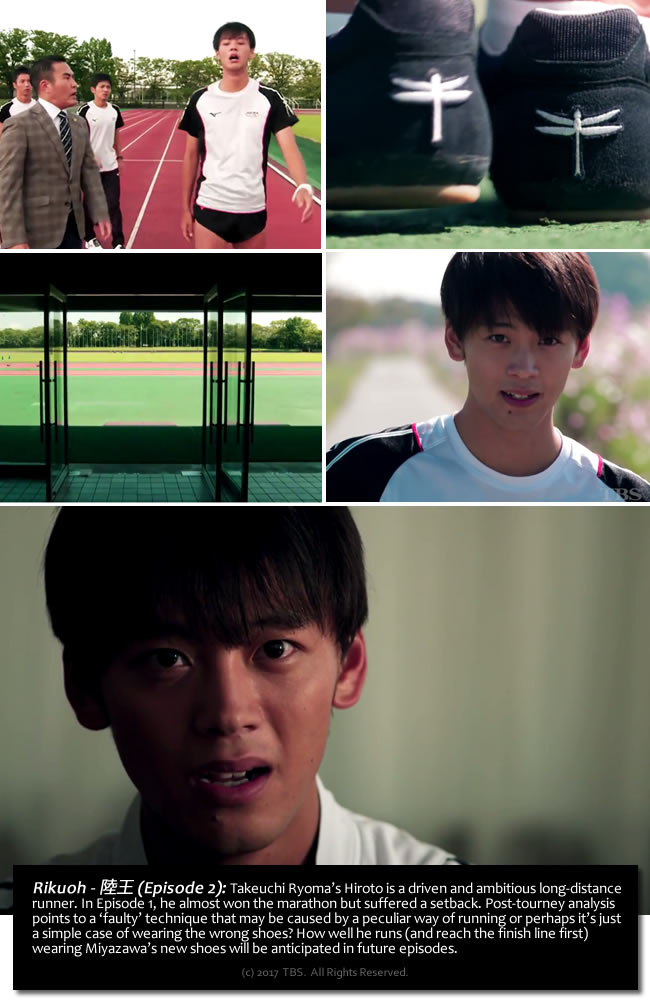 That’s my take on the cast and first impressions?

The directing-scriptwriting team of Fukuzawa and Yatsu Hiroyuki has proven through the years their collective effort via high ratings. Rikuoh, currently hovering at 14-15% audience share is not doing badly after all. But then again, ratings mean nothing unless you’re moved, identifies with a particular character or felt ’emotional’ overall.