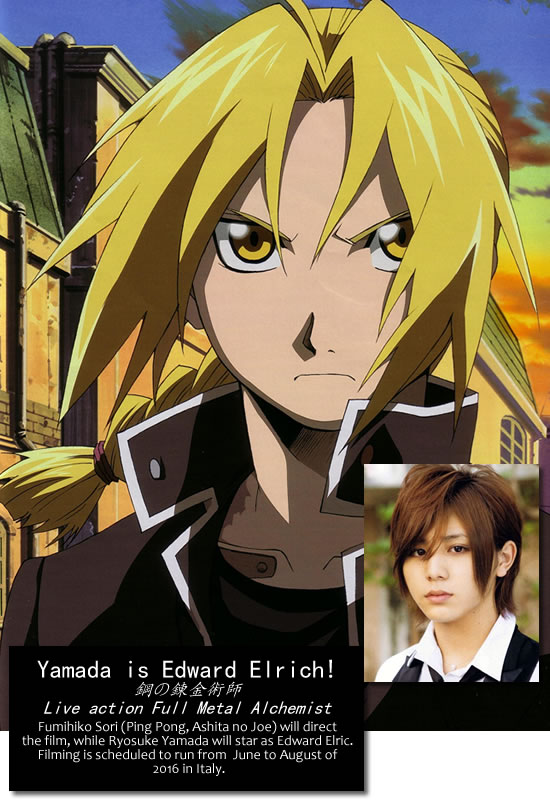 What the Movie is all about: The movie takes place at the beginning of the 20th century, in a reality where alchemy (ancient esoteric science that sought the transmutation of matter) is real, extremely developed and respected. The plot features brothers Edward (Ryosuke Yamada) and Alphonse Elric who, after attempting the forbidden technique of human transmutation, suffer the consequences. Alphonse loses his entire body while Edward loses his left leg. Edward then sacrifices his right arm to save his brother’s soul by attaching it to a metal suit of armor. Edward is then given mechanical prosthetics known as “auto-mail” in place of his missing arm and leg. Upon acceptance into the State Alchemists, he is given the nickname “Fullmetal Alchemist”, all while searching with Alphonse for the legendary philosopher’s stone, that will repair their bodies.

Highlights: Notwithstanding the blond hair, I contend that Yamada Ryosuke resembles closely his character, Edward Elrich and it’s a casting scoop for the Hey! Say! JUMP standout. In a recent interview, he mentioned his height and that he’s not “that tall”, which actually serves as a casting advantage.

Edward Elrich is like a ball of fire – filled with limitless energy and with a unique sense of humor. The fact that he interacts with his brother, who has been turned from being a human into a different ‘form’ requires a lot of faith – in the sense that in the live action, he might be talking to an ‘invisible co-star’ where blue screens are supposed to put up the scenes. It’s hard enough to be a sensible, faithful Edward Elrich and to rely on CGI for most of the interaction… [read our first casting news for Fullmetal Alchemist]

Yamada is a huge fan of Fullmetal Alchemist and stated he was overjoyed to get the opportunity to play Ed. He said he didn’t feel like he had too much of a problem interpreting the character but asked the audience after watching the film’s footage if anything looked “weird.” His meaning was obvious but if had any lingering fear of acceptance, the resounding cheers throughout the room should put him at ease. [source]

… since the main characters are the two brothers, where there is Ed, there will always be Al. Even just based on that, the amount of CG used becomes enormous. In this work, I’m using a technology that was used in Hollywood movies such as The Avengers. We’re using a lot of new techniques that were never used in Japanese movies before, I would like to boost Japan’s CG level with this movie. Since the original story consists of 27 volumes, I cut it down into two hours, but we will stay faithful to the manga. I can’t tell you many details yet, but I think that you can guess what will be the main story based on the cast that was already announced. Since I’m a big fan of the original myself, I don’t plan to change the setting, the world view, and make a different story, so please don’t worry about that. Of course, we will have the philosopher’s stone coming out [somewhere in the story]

Director and special effects guru Sori Fumihiko said that the live-action adaptation of Fullmetal Alchemist is both story-driven and will also rely heavily on special effects.

If you’ve seen two of his previous work – Pingpong and Tomorrow’s Joe – then you’ll appreciate his remarks. Both Pingpong (Yosuke Kubozuka) and Tomorrow’s Joe (Yamapi, Iseya Yusuke) are sports drama-thriller with plenty of action and the special effects are awesome. But both are also story-driven with excellent character development.

Below video clip is from the Japan Expo 2017 featuring Yamada and the rest of the cast:

Trailer Impressions: The 3rd trailer is the most revealing of the lot. Aside from select scenes taken from the first 2 teasers, it offers a clear and concise introduction to the whole ‘Fullmetal alchemist’ universe, with acting highlights from Yamada Ryosuke in full spectacle.

Trailer 1: Definitely a ‘teaser’ to both fans of the manga/anime and those who have yet to get into the ‘Fullmetal Alchemist’ universe, which is regarded as one of the most popular manga of all time, competing with the likes of Death Note and Attack on Titan, perhaps Tokyo Ghoul and Bleach too!

Trailer 2: The highlight is the scenes where the brothers perform alchemy and tragedy struck as one of them loses his body, while the other loses one of his legs. Fast forward to the present and Edward (Yamada Ryosuke) is seen as a matured young man, with his brother in ‘Fullmetal gear’.