There was a time – mostly near end 90s, early-till-end 00s – when everyone who was even a little bit of a (horror) movie fan would know the difference between Western horror and Asian horror flicks. There were plenty of projects, productions, and even publications focused on the latter, and it was somewhat easy to grab a hold of an officially subtitled DVD version of your favorite movies as well. Hollywood, of course, instantly jumped onto the hype and remade countless of Asian stories into – usually rather substandard – Americanized versions. You might have watched something while growing up without ever knowing it was based on something else!

But let’s go back to one of its origins: Japan. The country has a whole backlog of creepy and mysterious (ghost) stories and a lot of them were inspired or taken from old tales and legends – generally called Kaidan, a strange story – from as far as the Heian period (794–1185). Even if you’re a casual movie, drama, or anime watcher, you’ve likely at least passed some reference of it at some point.

It goes without saying that from that near infinite pool of base material, a lot of different projects will continue to be made, and a lot of those projects go on to become franchises of their own. Who hasn’t heard of Ring, or The Grudge? Or perhaps One Missed Call and The Chasing World? Did you know Tsuchiya Tao’s little brother Shinba was one of the many Toshio’s in The Grudge series by the way?

In any case, it’s October, which means the only genre we really need to be prepared for the end of the month, is horror. J-Horror.

Child of the Well

Since the pile is endless, and we have to begin somewhere, let me start where it all began for me: the series revolving around our favorite long-haired well-dwelling Sadako or, well, Nakata Hideo’s Ring which was released in 1998. The movie was an adaptation of a 1991 novel of the same name by Suzuki Koji – I totally recommend that one – and was one of the projects that set off the J-Horror revival trend at the time.

As the novel itself went on to spawn multiple sequel stories by the hand of Suzuki, such as Spiral (Originally released as Rasen in Japanese), Loop, and the short stories – and part prequel – collection Birthday, it was inevitable for more adaptations to show up. It was so that the original Ring received not one but two direct – though separate – movie sequels: Spiral and Ring 2. While the former was based on the novel, the latter was eventually made to continue the story of the first movie after Spiral had had an underwhelming performance in cinemas.

Additionally, both Ring and Spiral also received their own drama series adaptations in 1999. A year after the release of Ring 2, the adaptation of prequel story Lemon Heart – from the Birthday novel – saw life as Ring 0: Birthday.

The same year Ring 2 came out, South Korea tried its own hand at the J-horror hype, releasing The Ring Virus or short, Ring. While the project itself was meant to be an adaptation of the novel, the movie has various scenes and details in common with the Japanese version. The most clear one being that both movies had switched the gender of the lead character from male to female.

Two years later, it was Hollywood’s turn. Gore Verbinski launched the horror remake flood with his own version of Ring in 2002. On a soundtrack by Hans Zimmer, the movie starred Naomi Watts and was released to great success, paving the way for more adaptations and sequels to come across the waters. The English-language Ring franchise saw another few movies added to its line-up, and Dark Water – by the same writer – was pulled along with its popularity. But it wasn’t just Ring, of course, and in-between a whole series of Asian horror joining along the wave, Japanese hotshots such as Pulse (Kairo), One Missed Call (Chakushin Ari) and The Grudge (Ju-on) got its own dedicated following with multiple remakes not long after. And, to be honest, do any of them even really live up to their originals?

For all the American remakes of Asian horror, I can actually only think of one time it happened the other way around. A Japanese distributor commissioned a sequel to the highly popular Paranormal Activity series. Director Nagae Toshikazu then wrote and filmed Paranormal Activity 2: Tokyo Night (2010) which continued on the original’s story. It starred Nakamura Aoi, and Aoyama Noriko. A lot of English language media seems to rather forget it exists, though.

As the rest of the world continued to discover Asian horror, Japan just continued on its regular flow. Building on the hype started by projects such as Ring, multiple other directors and writers challenged themselves to the genre again, not forgetting Sono Sion of Suicide Club greatness. Some people might remember the cult film as Suicide Circle, the direct translation of its Japanese title. The movie’s prequel, Noriko’s Dinner Table, was released in 2006, and while the project was meant to be a trilogy, the third part has yet to see life. Additionally to the movies, Sono did write a novel version of Suicide Club. It was released in 2002.

Sono is known for doing a bit of everything throughout his whole career, but every so often he ends up revisiting the horror genre. His filmography includes hits such as Exte (2007), as well as his own version of The Chasing World called Tag (2015). More recently, in 2017, the drama series Tokyo Vampire Hotel saw its worldwide release through Amazon Video.

In the meantime, popular director Miike Takashi joined in with the release of One Missed Call (2003), based on the novel of the same name by Akimoto Yasushi. Despite his older works generally revolving around crime and gangs, Miike was also responsible for the Box part of Three… Extremes (2004) which featured horror stories by three different Asian directors. Lesson of the Evil – another novel adaptation – was released in 2012, and both Over Your Dead Body and As the Gods Will came out in 2014.

Sadly, all good things come to an end, and the biggest part of the horror wave had pretty much died down by the end of the ’00s. If anything, the only few series that have been continuously releasing new – though usually low-budget – installments throughout the past decades might be The Chasing World (Riaru Onigokko) and Werewolf Game (Jinrou Game). Both of those franchises are also based on novels by Yamada Yusuke and Kawakami Ryo, respectively, and tend to have a rather unknown and rookie cast.

Horror obviously didn’t ever fully disappear, but it wasn’t really till the release of Suzuki Koji’s S and Tide novels in 2012 and 2013, that a big horror series made some waves again. Ishihara Satomi and Seto Koji’s Sadako3D (2012) and its direct sequel were inspired by S, while 2019’s Sadako starring Ikeda Elaiza and Shimizu Hiroya had ties with Tide. The Grudge followed in its footsteps by releasing two new movies in 2014 and 2015 – one led by Sasaki Nozomi, and the other by Taira Airi – as well as a drama series called Ju-On: Origins (2020) (It is available on Netflix!).

Perhaps it’s the year’s atmosphere so far, or maybe it’s just because of having been able to re-energize all these years – I have no clue – but it seems the Japanese horror scene might really liven up again. The Ju-On drama series wasn’t the only new thing to arise since January this year after all. Master of Horror Shimizu Takashi has also added to the genre by revealing his own project Howling Village – also known as Inunaki Mura. The movie saw its release past February, and stars Miyoshi Ayaka and Bando Ryota, among others. With a sequel already in production, it might have everything in the making of a new series to join the ranks. Suicide Forest Village, or Jukai Mura, currently has a 2021 release window.

Horror writer Otsuichi, as well, has taken to the movie scene this year, making his directorial full length movie debut with Stare – or Shirai-san. While it was the novelist’s first big directing project, multiple of his stories have been adapted through the years. The most known ones probably being 2005’s ZOO and 2008’s GOTH. The former has Suga Kenta and Kamiki Ryunosuke among its cast, while the latter stars Hongo Kanata and Takanashi Rin.

In the end, the only person who never really stopped making anything in the genre is that other horror master, Nakata Hideo. The past three decades – which is basically his whole career – are filled with horror releases, and I doubt that trend is going to stop anytime soon. Earlier this year, for instance, the man was busy with Stigmatized Properties (Jiko Bukken: Kowai Madori), starring Kamenashi Kazuya, and the drama adaptation of Tsunoda Jiro’s Kyoufu Shinbun which ended recently was also by his hand. At least there are some certainties in the world. 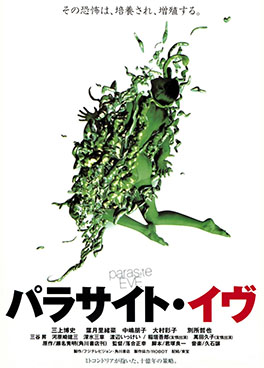 While probably not as known abroad as it is in Japan, I did want to mention something about this one. Parasite Eve was a science-fiction horror movie released in 1997, just before Ring, but was originally a novel and part of the same horror boom Ring belonged to early ’90s. Though director Ochiai Masayuki has mentioned the movie adaptation had to compromise on multiple levels, and couldn’t be a true horror movie, it seems it has somewhat of a cult standing among movie viewers. Parasite Eve somehow made its way into society to the point that upon being questioned about the color of a mitochondria, people would just reply green as it had been shown in the movie.

The original novel’s writer, Sena Hideaki, became the first winner of the Japan Horror Novel Award for the story’s release, which eventually didn’t only have the novel adapted to a movie, but also a manga as well as multiple games by studio/publisher Squaresoft (now Square-Enix). More recently, band Bring Me the Horizon was inspired by the works for one of their latest new songs.

Last but not least, a long list of horror movies for you guys to check out! Perhaps you’ll find some interesting ones you haven’t seen before. And if you’d prefer reading, the novel or manga writers have been added in-between brackets.

As the Gods Will – Kamisama no Iutoori (Kaneshiro Muneyuki)

Lesson of the Evil – Aku no Kyoten (Kishi Yusuke)

One Cut of the Dead

A little outside horror’s boundaries…