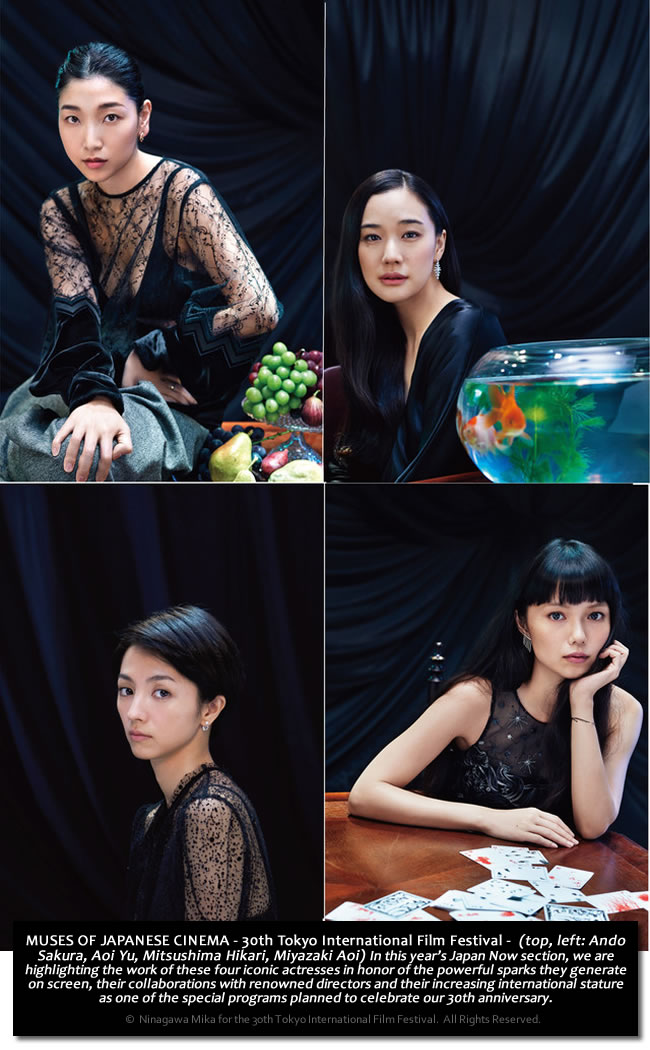 The 30th Tokyo International Film Festival is about to start and one of this year’s special event is the celebration of the selected works of actresses Ando Sakura, Mitsushima Hikari, Miyazaki Aoi, and Aoi Yu. Dubbed ‘Muses of Japanese Cinema’, the four are also expected to join panel discussions right after the film showing.

The Tokyo International Film Festival (TIFF) is excited to unveil the key visual of the Muses of Japanese Cinema: Sakura ANDO, Yu AOI, Hikari MITSUSHIMA and Aoi MIYAZAKI. Photographed by the acclaimed photographer and film director Mika NINAGAWA, the theme of the visual is celebration and the unique and attractive characteristics of “Tokyo.”  In this year’s Japan Now section, we are highlighting the work of these four iconic actresses in honor of the powerful sparks they generate on screen, their collaborations with renowned directors and their increasing international stature as one of the special programs planned to celebrate our 30th anniversary. [read more]

Each will have two featured movies. Extensive discussions of these films after the jump!

Ando Sakura: Our Homeland and 0.5mm

Ando Sakura comes from a family of artists. Her father is Okuda Eiji, an accomplished film director, scriptwriter, and actor. Her older sister, Momoko, is also a filmmaker and directed 0.5mm (her second film after A Piece of Our Life – Kakera, which incidentally stars Mitsushima Hikari). She is also married to actor Emoto Tasuku.

Our Homeland is Japan’s official entry to the American Oscar Awards for Best Foreign Language Film back in 2012. It talks about an ordinary Japanese family who welcomes back their son Sung-Ho (Arata) sent to North Korea by the patriarch, who is Half-Korean. He returns after 25 years for medical treatment.

Mark Schilling at the Japan Times says, and I quote:

The West tends to regard North Korea as either a shadowy hell of extreme poverty and conformity or a bizarre Ruritania run by pudgy dictators with eccentric hairstyles. Yang, by contrast, dramatizes the human cost the North’s system inflicts, without filters and with an abundance of hard-won knowledge. Her style is TV-drama direct, with every actor in the main cast getting at least one big emotional scene, but also unsentimental and uncompromising. How Yang, so new to directing actors, was able to extract such intensity and honesty I don’t know, though the raw-seeming, superbly crafted evidence is on the screen. [source]

The peculiarly titled 0.5mm is about a poor young woman who has to compromise her integrity and accept the sexual demands of her patients in order to survive. Of course, it is not as simple as that:

Sawa, a home helper for a middle class family with an elderly infirm grandfather, is forced to stretch her morals to keep her job. As a result, she finds herself broke and out on the street. She survives her first night by striking up an ambiguous friendship with a kindly old man, gaining access to a portion of the immense wealth held by Japan’s aging population. She continues with similar encounters, and while these begin as scams or revenge on rampant sexism, they ultimately become vulnerable intergenerational exchanges. Director Momoko Ando (Kakera: A Piece of Our Life, 2009) masterfully crafts this journey through Japan’s embattled sexual landscape, confronting aging, class and patriarchy. Adapted from the director’s first novel, 0.5mm features Sakura Ando (the director’s sister), who charges each scene with as much humanity as its impeccably photographed frames can handle. This is a dark and profound comedy of the best sort. [source]

I believe that majority of our readers are not as familiar with Ando Sakura as the other actresses. However, looking back at recent casting history, both Mitsushima and Ando co-starred in the much-acclaimed Sono Sion movie Love Exposure.  That’s about 11 years ago, so I can understand the new generation of J-movie/J-dorama watchers doesn’t know her well.

I also think that Ando Sakura’s level of acting and her choices of films are not ‘mainstream’ in the sense that some of her roles are not meant to ‘please’ but rather to provoke or to challenge. One can say, roles that are suitable to the likes of Ayase Haruka or Takkei Emi or Ueto Aya are definitely not meant for her.

Mitsushima Hikari: Traces of Sin and Life and Death On the Shore

Perhaps on the same level of acting competency as Ando, Mitsushima Hikari is more ‘mainstream’ if we’re to look carefully at both actresses’ acting resume. Both have won numerous awards, and have been cast in main and supporting roles. However, the big difference is that Mitsushima has more TV drama/series exposure than Ando.

For the Tokyo Film Fest, Mitsushima’s featured films are very recent – Traces of Sin was released in 2016 and Death on the Shore was shown in Japanese theaters only last July.

This picturesque war romance unfolds against the stunning backdrop of Kakeromajima in the Amami Islands during the tail end of World War II. Manila has fallen and Tokyo is burning, but life in Kakeromajima continues undisturbed. However, the Imperial Japanese Navy continue to arrive, concealing Shinyo suicide boats within the island. Toé (Mitsushima) is a daughter of the island and devoted schoolteacher to the local children. Saku (Nagayama Kento) is a hesitant young captain who would rather spend time reading books and learning island songs in the local language. They are both drawn to each other but are careful to overstep any personal boundaries. When Toé receives a letter from Saku to meet by the beach, they begin a secret romance by the shade of night. However, their time together cannot last — as the war looms closer, the lovestruck couple runs out of borrowed time. [source]

Gokuroku: Traces of Sin is about siblings played by Tsumabuki Satoshi and Mitsushima and their possible involvement with the brutal death of a family of three. [Read our movie review here]

Mitsushima exudes a sensual and fearless presence in some of her movies, especially in Love Exposure and End of Summer. Both featured films at this Festival somehow ‘promote’ this sensuality but in varying ways –  with Life and Death on the Shore, perhaps, more pronounced.

All things being equal, Mitsushima has captured the imagination of most J-movie/J-drama lovers than Ando because her movies are more accessible, and yes, more mainstream. But it doesn’t mean Mitsushima will not relish playing a dark, notorious, or even despicable character like Ando.

Aio Yu: What a Wonderful Family (Part 2) and Hana and Alice

If Ando favors dark, even ‘marginalized’ movie characters and Mitsushima prefers her roles to exude sensuality and independence, Aoi Yu’s signature acting style is magnified by her ability to dance, and wow, she’s one of Japanese cinema’s prima ballerina!

Hana and Alice was released in 2004, which makes it almost a ‘classic’ already by some standards. Acclaimed director Iwai Shunji should be credited for propelling the actress to a more prominent position in Japanese cinema – her ballet interpretation more than halfway through the film beguiles and seduces anyone who watches it.

A review at IMDb praises the movie in an almost poetic way:

It may look like just another saccharine love-triangle romance, but ‘Hana and Alice’ is actually a deceptively tender and subtle paean to how gorgeous and sweet friendship can be. Although initially, we have two high-school girls, Anne Suzuki and Aoi Yuu, squabble over a hapless senior, the film isn’t really about teen crushes and jealousy. Instead, as layers of each girl’s background and character are peeled away, we discover a surprising amount of depth and resonance to Hana and Alice’s friendship. The ballet scene is much talked about and fawned over, but the real highlight for me was where we find out that Hana was, in fact, a near-autistic child, shunning the outer world from her flower house, until Alice came along and enticed her out into the world. This scene increases the emotional strength of both the film and the girls’ relationship exponentially and turns the movie from merely entertaining into truly touching. [read more]

Acclaimed filmmaker Yamada Yoji’s What a Wonderful Family (Part 2) showcases the Hirata family and their ‘misadventures’. This is regarded as the second film, however, if you look carefully at Yamada’s filmography, you may notice that an earlier film – though not entirely related – may as well be considered the first film to feature a certain Japanese family. That said Yamada film entitled Tokyo Family is an homage to Tokyo Story by Ozu Yasujiro.

Keeping the all-star cast of the original, Yamada delivers more of the same amusing theatricality that made the first film an unexpected delight. Taking place almost entirely behind the closed doors of the Hiratas’ suburban home, the interactions between three generations playfully expose the changing values and behaviours within contemporary Japanese society. [source]

Miyazaki Aoi variety of roles in films is nothing short of extraordinary: Imagine this – Bullied student in Harmful Insect, one of the two girls named ‘Nana’ in Nana, a photographer hopelessly in love in Heavenly Forest, an aspiring painter in Virgin Snow, a doctor’s dedicated wife in In His Chart, and the object of Majime’s (Matsuda Ryuhei) affection in award-winning film, The Great Passage.

There are plenty more, of course, but the above offers a fine example of what she has accomplished as an actress. For the festival, they picked Rage (Ikari) where Miyazaki plays a young girl who ignores modesty in favor of the freedom to explore her sexuality. Her encounter with a relatively new guy in town – a stranger who may be covering a secret (Matsuyama Kenichi) – further complicate things, when she already has some issues at home. [Read our movie review here]

The other movie released in 2000 is entitled Eureka. It’s about a driver (Yakusho Koji) and siblings Naoki (Miyazaki) and Kozue (played by Aoi’s real brother, Masaru) who were survivors of a violent crime, and how they cope up after.

Kevin Thomas at the LA Times raved about the film:

Time is the ultimate critic, but there’s every reason to predict that Shinji Aoyama’s “Eureka” will become one of the landmarks of the world cinema of the first decade of the 21st century. It has a daunting three-hour, 40-minute running time but is so compelling and so completely accessible that it doesn’t seem as long as most films half its length. This is a work of deceptive simplicity that grapples with the eternal theme of redemption with a Dostoevskyan intensity and scope. To watch this film, in short, can be a transforming experience, an effect often cited by viewers of Krzysztof Kieslowski’s “The Decalogue.” [source]

That’s about it! Which of these movies are you the most interested or curious? Let us know what you think!