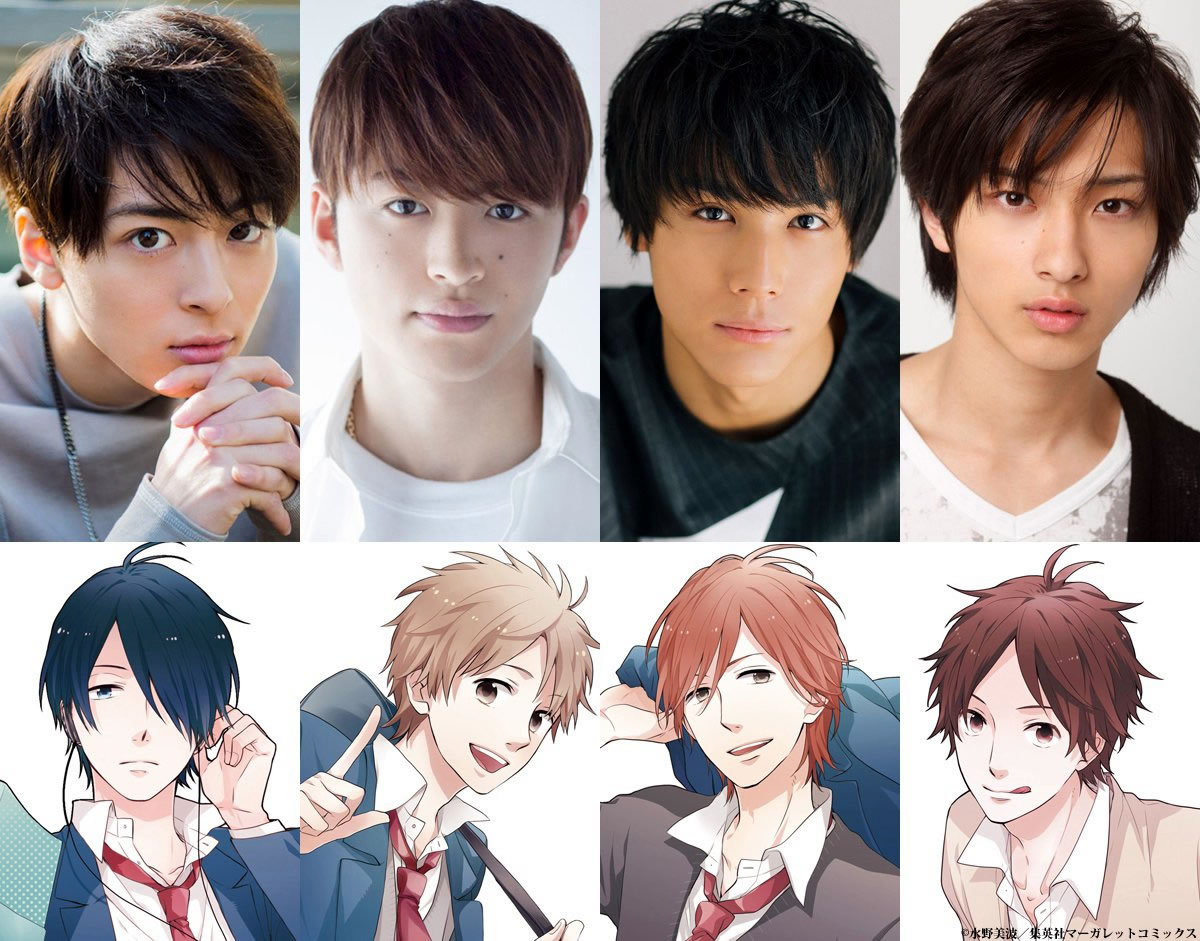 Nijiiro Days or Rainbow Colored Days, the popular shojo manga, written and illustrated by Mizuno Minami will have a live-action movie slated for 2018.

The main roles were already cast and they are Takasugi Mahiro (as Naoe), Sano Reo (Hashiba), Nakagawa Taishi (Matsunaga), and Yokohama Ryusei (Katakura). There were plenty of positive reactions when the anime was aired in 2016, so the expectation is also relatively high for the live-action.

Here’s a description detailing the relationships of the main characters:

Nijiiro Days follows the colorful lives and romantic relationships of four high school boys—Natsuki Hashiba, a dreamer with delusions of love; Tomoya Matsunaga, a narcissistic playboy who has multiple girlfriends; Keiichi Katakura, a kinky sadist who always carries a whip; and Tsuyoshi Naoe, an otaku who has a cosplaying girlfriend. When his girlfriend unceremoniously dumps him on Christmas Eve, Natsuki breaks down in tears in the middle of the street and is offered tissues by a girl in a Santa Claus suit. He instantly falls in love with this girl, Anna Kobayakawa, who fortunately attends the same school as him. Natsuki’s pursuit of Anna should have been simple and uneventful; however, much to his dismay, his nosy friends constantly meddle in his relationship, as they strive to succeed in their own endeavors of love. [source]

Casting for the female characters are not yet announced as of this writing.

Here are more details about the main characters:

A member of the J-pop group Generations, Sano Reo, plays the main character Hashiba Natsuki. With less than 5 acting projects to his credit, including the High and Low franchise, Sano is the least experienced among the cast in terms of acting exposure. Commenting on the casting news, he said he is anxious and worried about playing the character but will do his “utmost best” to please the audience.

Natsuki is very shy and clumsy, especially when dealing with love. He is also quite a delusional guy and often ends up daydreaming. It is often stated that he is prone to more “feminine” tendencies, in that he is very emotional and is more prone to crying for trivial things, which is why he sometimes gets teased for being a little girly and maiden at heart. He is an honest and genuine guy, but also very innocent as he becomes embarrassed regarding different things that his friends normally don’t have any problem with, in which can lead to Natsuki even fainting. At the same time, Natsuki is very kind, polite and overly considerate of others, to the point that his relationship with Anna progresses at a very slow pace and never doubts other people. [character description from Nijiro Days wikia]

Taishi Nakagawa plays Matsunaga Tomoya. He enjoys a double whammy casting scoop when he did Today’s Kira-Kun and RE: Life. With more than 20 movie and drama projects, he already established himself as one of Japan’s up and coming dramatic actors. As lines are drawn, there are two distinct acting groups that is shaping up in the competitive, but unified young actors category: the rom-com (mainstream and much favored by production committees), and the indie/serious type movies (movies that are shown in international film festivals and are expected to win awards). The former has Nakagawa and Yamazaki Kento as leads, while the latter has Murakami Nijiro, Shimizu Hiroya, Suda Masaki as top players.

Mattsun has a narcissistic personality, stating that he thinks that he is really cool, and he constantly flirts with other girls and has an aura that attracts girls. But he is very caring, and cares mostly for his friends and is also overprotective of his little sister, Nozomi. He is also flashy but is understanding of situations and has quite good patience. After falling in love with Mari, he decides to stop playing around with girls for mostly her sake, but also because he realized how half-hearted he was about going out with girls. [character description from Nijiro Days wikia]

Above is the trailer for Rainbow Days anime released in 2016 produced by Production Reed.

Yokohama Ryusei plays Katakura Keiichi. Yokohama is next in line when it comes to actors promoted for a certain type of roles and he is already being typecasted. Like Sano, he has the least acting experience among the group. Movie projects have picked up since 2017, with Ani Tomo, about a good looking high school guy falling for his friend’s younger sister, as his first leading role.

Keiichi is a really good person; he is athletic, cheerful and kind, but also loyal and caring towards his friends. However, he is actually a sadist, and he always carries around a whip, and he also likes to whip people. But he is always straightforward about it from the beginning. He can be a bit insecure about his friends and his romantic life but always manages to snap out it since he knows his friends care for him. Most girls who confess to him often mistake him to be a wholehearted being with a kind personality but beneath the amiable attitude, he is actually a sadist.  [character description from Nijiro Days wikia]

Takasugi Mahiro portrays Naoe Tsuyoshi. Perhaps the most critically acclaimed among the major cast, Takasugi has established a reputation as a dramatic actor with both mainstream and independent projects. Takasugi levels up with the upcoming Setoutsumi drama (with Hayama Shono) and The Time of Backlights (his second movie collaboration with filmmaker Kobayashi Keiichi, after the much-praised Bon Lin: read our movie review here).

Tsuyoshi is known to be very stoic. He is normally seen wearing a neutral expression, making it hard to read what he is thinking about. He is also quite an unpredictable guy and is not very good at reading the atmosphere. He says that he is quite antisocial and used to be a guy who didn’t talk with people until they approached him. Prior to meeting Yukirin; his girlfriend, he didn’t have any interest in love or dating, and only focused on studying, hanging out with friends and live in the 2D world. He seems to live in his own little bubble and sometimes doesn’t take his surroundings into consideration, and before he didn’t really socialize with people and nor was he good at dealing with them. Despite his quiet personality, he can become very talkative when talking about anime, manga, and games. [character description from Nijiro Days wikia]

This is light comedy-drama, with plenty of interaction between the characters. Unlike Bon Lin or The World of Kanako which required a greater sense of ‘drama’ and intensity, I’m sure Takasugi Mahiro will nail his character with ease. The same goes for Nakagawa Taishi – this is another second lead character for him, following Kids on the Slope.

Buy me a coffee!

Actors' Bias Beyond the Frame Cast Updates Cross Talk Drama Features Food for Thought Generation NEXT Hitlist LA Movie Next Break Novel Platform Reviews Thoughts and Things TV & Film Youngbloods
Privacy & Cookies: This site uses cookies. By continuing to use this website, you agree to their use.
To find out more, including how to control cookies, see here: Cookie Policy
wpDiscuz
0
0
Would love your thoughts, please comment.x
()
x
| Reply
Go to mobile version