[Editor’s Note: This article was published early 2012. Many acting showdowns follow, and in Part 2 and 3, we’re launching more samples of such showdowns. Please stay tuned!]

I just love to watch movies where the lead actors have acting showdowns! One classic example would have to be Martin Scorsese’s The Departed, where Leonardo DiCaprio and Matt Damon pit talents as rival police officers. If you think about it, this movie was actually a remake of a Hong Kong film entitled Infernal Affairs (starring Andy Lau and Tony Leung).

Looking closely at the Japanese movie scene, there is a fantastic list of movies where the lead actors are engaged in acting showdowns – it doesn’t have to be a rivalry between two samurai warriors or a Yakuza versus a cop, or between the top dogs of rival gangs. It can be about friendships or a seemingly light bromance, where the acting is worthy of discussion.

Part 1 – with 5 awesome showdowns – after the jump!

01. Tatsuya Fujiwara vs. Kenichi Matsuyama – Death Note (movie series): This is almost equivalent to an epic boxing match between two amazing actors in Japanese cinema. Tatsuya Fujiwara, who is the senior of the two takes top billing but pales in comparison to the younger Matsuyama in terms of acting. While his work in Battle Royale is almost on the verge of cult status, as Light Yagami, he acted with ‘conscious’ hesitation and failed to show the character’s dark and sinister side. Matsuyama, on the other hand, was at his most charming – stealing scenes everytime he’s on the big screen. His comedic take is so in-your-face, you can’t help but be amazed.

About the Movie: Light Yagami (Tatsuya Fujiwara) finds the “Death Note,” a notebook with the power to kill, and decides to create a Utopia by killing the world’s criminals, and soon the world’s greatest detective, “L,” (Kenichi Matsuyama) is hired to find the perpetrator. An all out battle between the greatest minds on earth begins, the winner controlling the world. 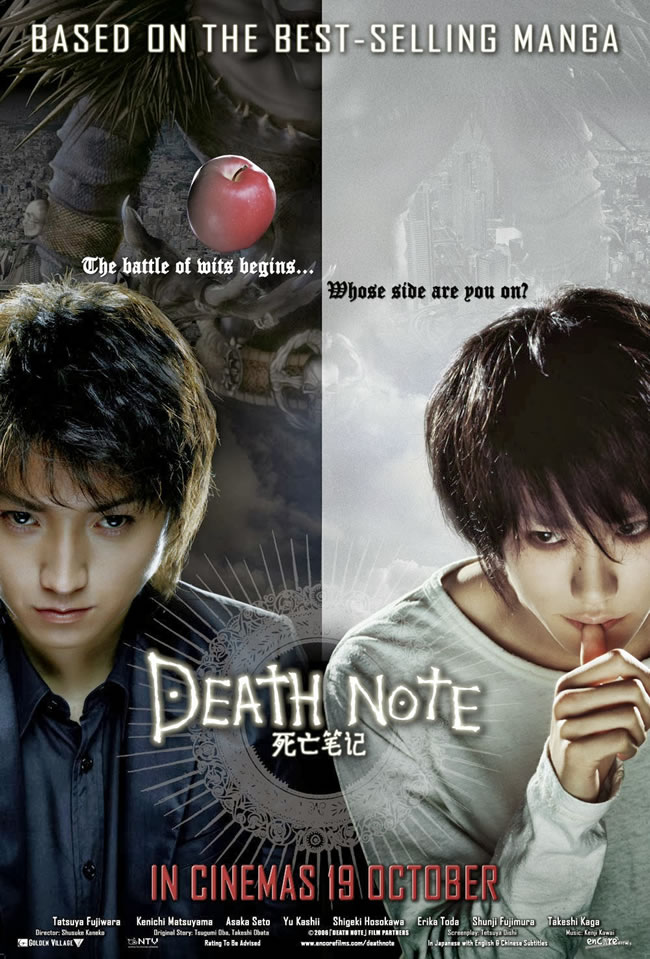 The Buzz: Rated 75% at Rotten Tomatoes and a similar 7.8 rating at IMDb, a good number of film critics love the movie.

… it’s refreshing to see a movie in which the lead characters are smarter than the viewer. It’s like Infernal Affairs/The Departed crossed with Devilman, Primal Fear and Drop Dead Fred. If that combination doesn’t scream “Watch me!” to you, well, you’re wrong. Bonus points for hilariously incongruous use of recent Red Hot Chili Peppers hits “Dani California” and “Snow” as theme music. [ source ]

02. Shun Oguri vs. Takayuki Yamada – Crow Zero, Crow Zero 2: There is something about Shun Oguri that comes off the silver screen as sad and melancholic. It must be the soulful eyes, which is a plus factor for dramatic roles. In Crow Zero and its sequel, it’s Oguri’s eyes that made his performance inferior to that of Takayuki Yamada. Yamada’s character projection – a relaxed demeanor, but with violent and notorious inclinations, is the epitome of cool. They both feed off of each other’s intensity, which is the reason why the movie is so good. 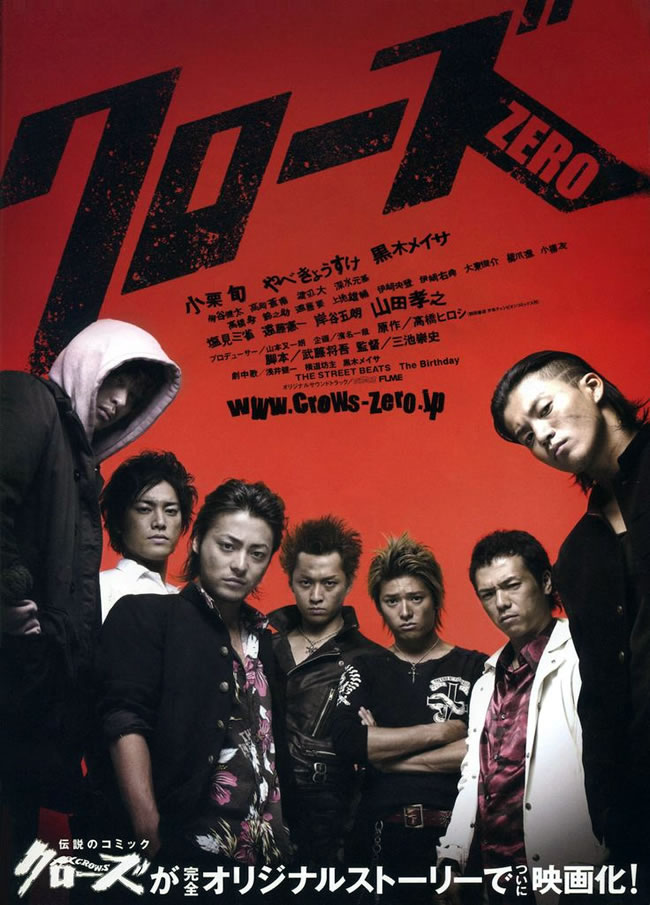 About the Movie: Idiosyncratic Japanese auteur Takashi Miike offers another meditation on a violent culture in this teen-themed thriller. Genji Takaya (Shun Oguri) is a teenage troublemaker whose father, Hideo (Goro Kishitani), is a high-ranking member of the Yakuza. Genji is a new student at Suzuran Boys’ High, an educational facility for juvenile delinquents nicknamed “The School for Crows,” and he’s determined to make a name for himself as someone who doesn’t back down from a challenge in order to impress both his father and his new classmates. Not long after arriving on campus, Genji comes to blows with Ken Katagiri (Kyosuke Yabe), who thinks at first that the new kid is someone else. Genji beats Ken into submission and wins his grudging respect, but when word gets out about the fight, Genji finds every tough guy in the school is waiting for his turn to show Genji who’s boss, with the leader of the school underground empire, Tamao Serizawa (Takayuki Yamada), waiting at the end of the line. Kurozu Zero (aka Crows: Episode 0) was the third feature released in 2007 by the prolific Takashi Miike.

The Buzz: Rotten Tomatoes’ audiences rated it 80%, while IMDb showed both movies at 7.0 out of 10. Says a reviewer @IMDb:

Casting for this film is absolutely incredible. I recognized so many faces, many who established themselves in Yakuza or delinquent roles, but the most pleasant surprise was Yamada Takayuki, who had his share of dark roles in the past, but never a violent one such as this, and possibly the first as a villain. I’ve never thought him as a wild type, but he was so cool as a villain and gave his character really big presence in this film. I’m still not convinced with Oguri Shun’s acting or his role as a violent punk student, but he seemed to be less out of place as he was in “Hana Yori Dango” dorama series. All the other cast did what they do best, and a very high level of acting overall.[ source]

03. Ryuhei Matsuda and Masanobu Ando – Big Bang Love Juvenile A: Masanobu Ando’s intense acting never failed to light up the screen – he is the bad boy of Japanese cinema, with an unwavering passion for diving into his characters. Just like Ryan Gosling in Half-Nelson and the more recent Drive, Ando’s performance in Big Bang Love Juvenile A, is controlled yet fiery. What makes this acting showdown unique is that it is not a bitter rivalry between the two actors but a passionate love affair without the physical intimacy. Matching Ando’s intensity is Matsuda’s passionate and deliberate performance as the shy and effeminate Jun. 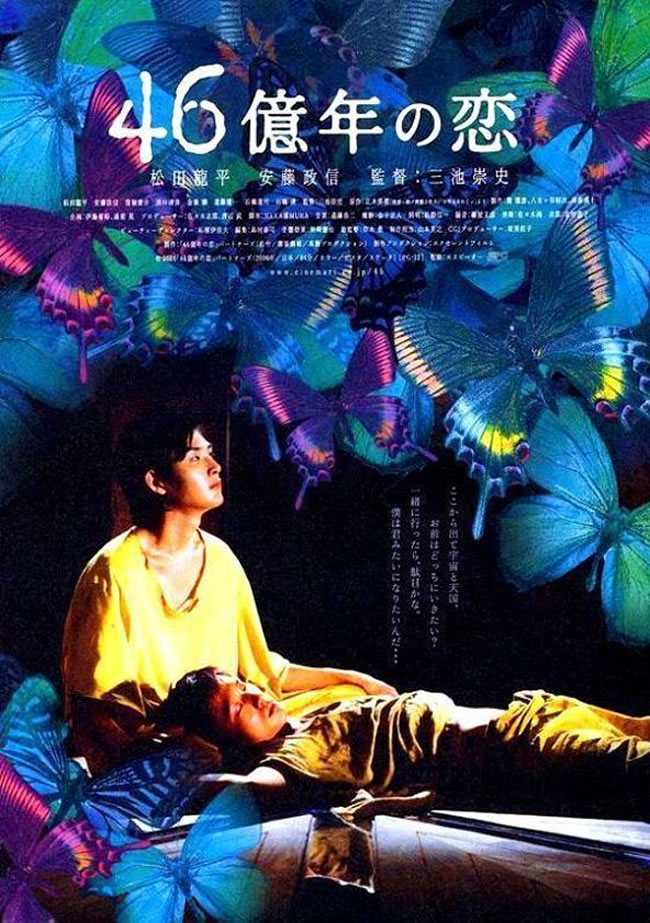 About the Movie: An unknown future. A boy confesses to the murder of another in an all-boy juvenile detention facility. More an exercise in style than storytelling, the story follows two detectives trying to uncover the case. Homosexual tension and explosive violence drive the story which delivers some weird and fascinating visuals.

Anyone who’s familiar with just a few of Takashi Miike’s films will have an idea of what kind of field they’re venturing into here. From Shinjuku Triad Society to Ichi the Killer to The Happiness of the Katakuris, Miike has plowed very individually, stylish furrows that have always been intriguing to follow. With Big Bang Love, Juvenile A his tractor is definitely in that field’s quirkier corner. Jun (Ryuhei Matsuda) is a shy, effeminate and vulnerable young man. Shiro (Masanobu Ando) is supremely confident, brutal and masculine. When we’re first introduced to these polar opposites we find one murdering the other and from this unspools an eclectic, chronologically challenged and visually stylized murder mystery. [ source ]

About the Movie: Kei Komachi (Kenichi Matsuyama) works for a big company in a densely populated area. Kenta Kotama (Eita) works for his family iron foundry business, which is in crisis. Both men are railroad otaku (avid fans of trains) and meet while riding on the same train. 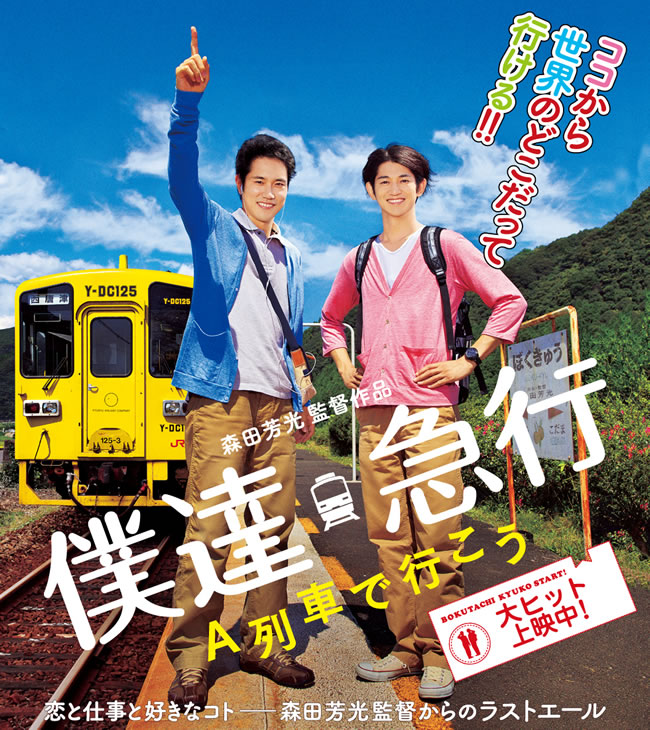 The Buzz: Japan Times rated this 2.5 out of 5 but praised the two actors:

Watching Kenichi Matsuyama and Eita play simple-souled train buffs who find uncomplicated pleasure in each other’s company, I understood again why actors lined up to work with Morita: He gave them permission to stretch beyond their usual screen personae, from the strange to the silly. Similar to Johnny Depp in his affinity for nonconformist, oddball roles (see his reclusive, sweets-addicted detective L in the “Death Note” films for an example), Matsuyama boards ” ‘A’ Train” as Kei Komachi, a nerdy salaryman working for a big real-estate developer. Eita, who plays the Unabomber-like loner in Toshiaki Toyoda’s new drama “Monsters Club,” is Kenta Kodama, the unworldly son of a small metal-shop owner who is fascinated by anything metallic, especially if it has wheels and rides on rails. These two first lock eyes on a one-car rural line beloved by train buffs and later serendipitously reunite and become instant soul mates. The bromance that develops is devoid of any sexual vibes but is full of gay overtones for anyone paying attention, and the two leads generate some comedy from this. Their fine comic balancing act supplies many of the film’s laughs.

05. Tomohisa Yamashita vs. Yusuke Iseya – Tomorrow’s Joe: In Tomorrow’s Joe, Yamapi pits talent with the amazing Yusuke Iseya. Iseya who was the scene stealer in Thirteen Assasins, play the villain to Yamapi’s Joe Yabuki. As in his previous movies, Iseya is the ultimate actor. But the sympathy factor is there for Yamapi, who should be commended for his acting (credit goes to director Fumihiko Sori for brining out the best in the actor). 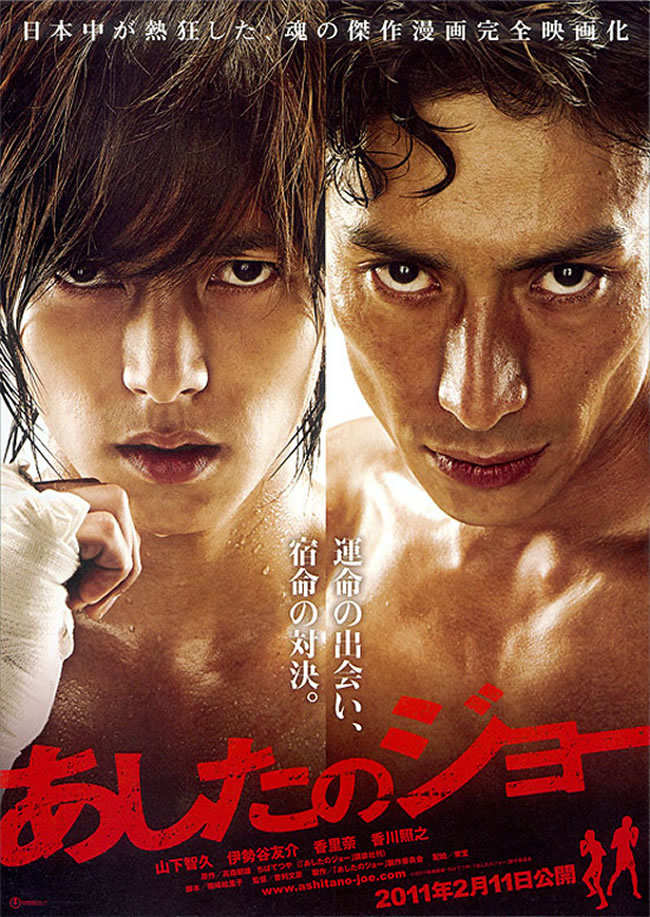 About the Movie: Set in the 1960’s, Joe Yabuki (Tomohisa Yamashita) lives in a run-down low-income area. There, alcoholic ex-boxer Danpei Tange (Teruyuki Kagawa) notices Joe Yabuki’s talents as a boxer. But then, Joe gets into trouble and is sentenced into the youth detention center. In the youth detention center, Joe gets into a brawl and then is knocked out by Toru Rikiishi (Yusuke Iseya) who is a champion caliber professional boxer. While incarcerated, Joe gets special training from Danpei Tange through letters. Upon Joe’s release, he quickly becomes an elite boxer and famous for a devastating cross counter. Meanwhile, Toru Rikiishi is also released from prison and quickly resumes his boxing career. Toru finally gets his shot at the world championship belt, but before that, Toru wants a match with Joe Yabuki. The two men enter the ring …

The Buzz: Garnering a very decent 6.9 rating at IMDb, it has, however, a low rating at Rotten Tomatoes with only 47% positive reviews.

Which of the above movie showcase your favorite acting showdown? Let us know what you think!>