Imagine having two of Japan’s most sought-after actors under one agency – Stardust! In the case of Jojo’s Bizarre Adventures and Tokyo Ghoul, that’s Kubota Masataka and Yamazaki Kento. A few drama seasons ago, it was the same two actors who revived audience’s interest in Death Note and with that their rivalry. Now they are portraying two of the most interesting characters to ever grace the silver screen – Higashikata Yosuke and Kaneki Ken.

Supported by one of Japan’s foremost film studios, Shochiku, the live-action Tokyo Ghoul spare no expense in promoting the film. Headlined by Kubota Masataka with a star-studded cast led by Shimizu Fumika, Aoi Yu, Oizumi Yo, Suzuki Nobuyuki, and many others the film took 3 months to finish. Directed by newcomer Hagiwara Kentaro, the author was reported to have preferred Mr. Kubota to play the main character- Kaneki Ken. 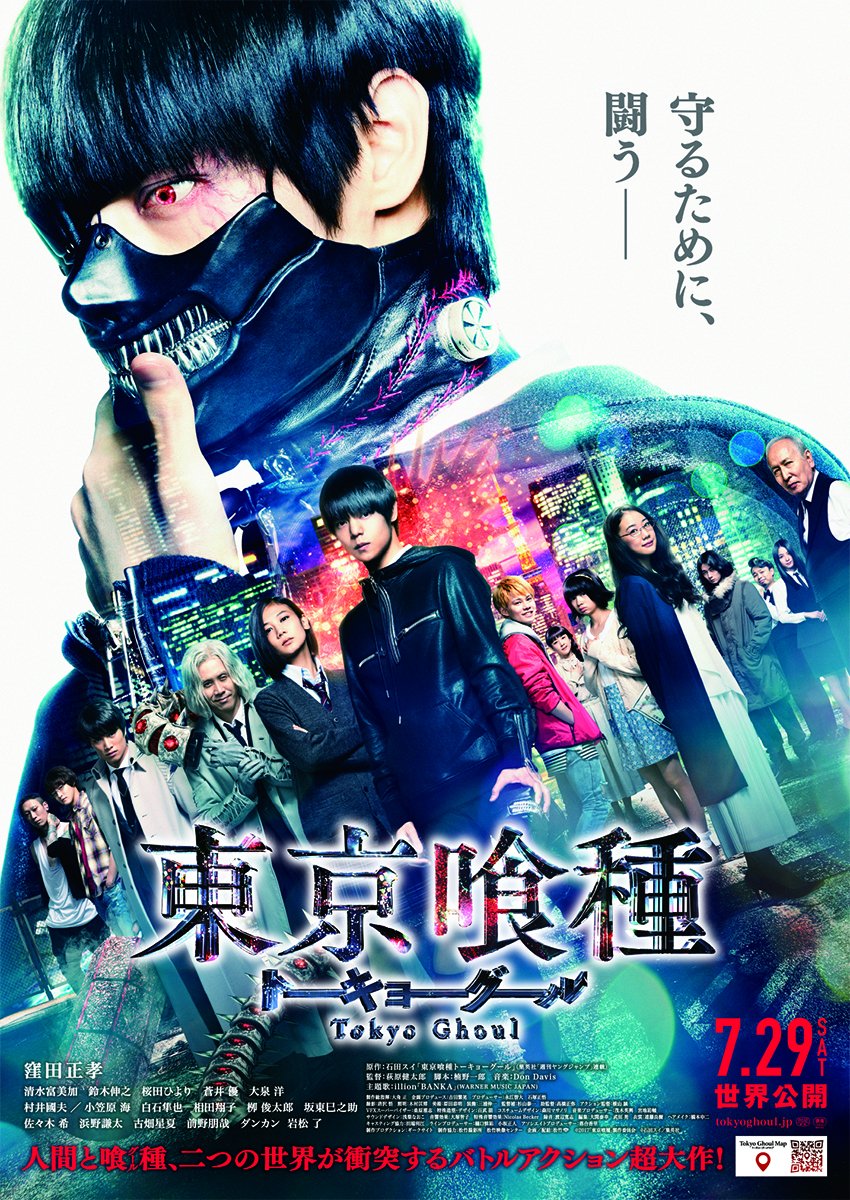 In Tokyo, man-eating monsters called “ghouls” run rampant. The populace has become fearful of these creatures, who hide themselves among ordinary people, and remain shrouded in mystery. Kaneki (Masataka KUBOTA) is an ordinary university student. He frequents a coffee house called “Anteiku”, where one day he meets a girl named Rize (Yu AOI). Little does he know that this encounter will drastically alter the course of his destiny… What does the future hold for Kaneki, who struggles to contain his curiosity regarding the existence of these bizarre entities, who take the lives of humans to ensure their own survival? [source]

There’s a definite familiarity here as Ken finds his new breed comes in both evil and good (well, chaotically neutral anyway) varieties and is stuck forging new relationships even as he dodges other challenges. The film rarely surprises, but one of the exceptions is the first appearance of a ghoul’s “kagune” — the aforementioned flesh weapons — which vary from ghoul to ghoul taking the form of beautiful, Abyss-like wings, anime-friendly tentacles, projectile-launching nubs, and more. They’re the coolest element of the film, but on the visual front at least they’re also the least fully-realized. The CG is attractive in its design, with a single exception mentioned below, but it never blends properly with the surroundings and instead feels and looks like animation layered atop it all. [source]

The live-action #TokyoGhoul will hit screens on 29 July! Check out a real life ver. of the “#Anteiku” cafe report ▶️ https://t.co/fCMliS9lUx pic.twitter.com/26haim7NeA

Tokyo Ghoul feels infinitely more coherent than many other live-action manga/anime adaptations. That the film only resorts to CGI when it absolutely has to – using wires, practical effects, and stuntwork wherever possible – also makes it a cracker of an action film, with interesting fight scenes full of character. [source]

The general consensus then is more positive than negative for Tokyo Ghoul. [Tokyo Ghoul edges Jojo’s Bizarre Adventures at IMDb with a 7.2/10 rating] 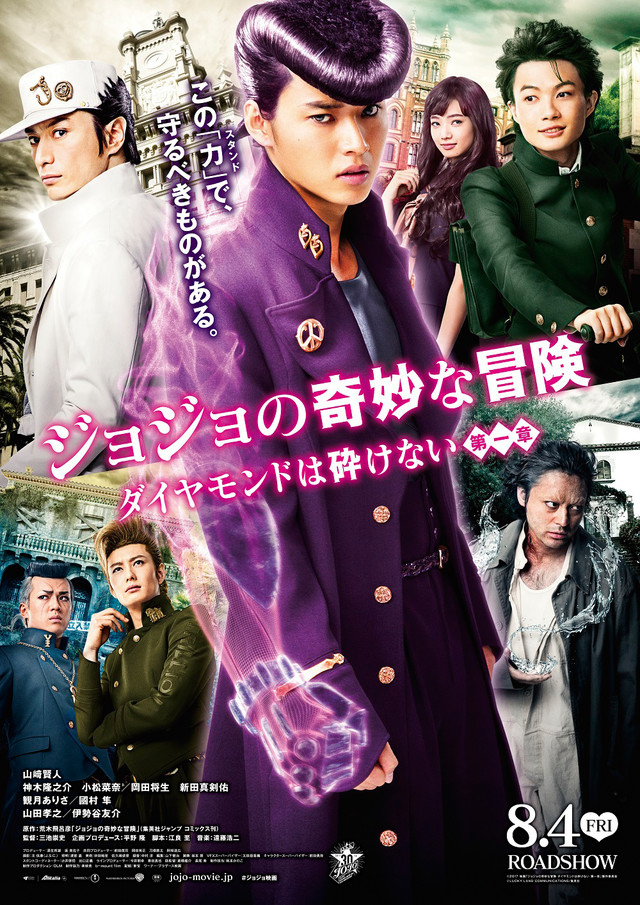 A teen named Josuke Higashikata discovers that he possesses supernatural abilities; inherited from a cursed and bizarre bloodline spanning generations. Discovering that someone within his hometown is granting others similar power, Josuke sets off on an adventure to uncover the mysterious threat. [source]

There’s so much to process between Josuke’s unconventional bloodline, rules about “Stand” usage and characters like Yukako Yamagishi (Nana Komatsu) who are given little purpose or backstory (coming from an outsider). Miike battles against a 2-hour length only to produce something that feels doubly long. I know we complain about franchises splitting movies into part-ones-and-twos (The Hunger Games: Mockingjay, for example), but JoJo’s first live-action run might have been more digestible in a smaller bite, not leaving you with a heavy stomach full of hair gel and demon water. Alternatively, what Miike accomplishes by way of action and oddities is slap-your-cheeks insanity. At any given moment, you’ll comprehend zero percent of what’s happening, yet be hypnotized by colors, creative lunacy and animated chaos. [source]

The adaptation that Takashi Miike gives us is colorful, as extravagant by the scenario as by the capillary wanderings of the heroes. We do not get bored for a second, between action and humor, not to mention the grandiose scenery and special effects. The universe in which Jojo evolves is totally fantastic, from costumes to strange Stands that some characters possess. The whole is very theatrical, full of twists, funny, original and well translated the spirit of the manga. The film garnered an endless cascade of applause and ovations, which Takashi Miike received with affability and Yamazaki Kento with a deep Asian reverence. [source]

Jay Seaver at EFilmCritic has specific remarks on the actors:

Though Kento Yamazaki’s JoJo initially comes off as something of an ass, it’s a performance that gets a bit better as he’s given a definite mission and given a chance to be less aloof, or have Ryunosuke Kamiki’s bright-eyed Koichi as a foil. Though Masaki Okada and Makenyu are fairly interchangeable as the villainous brothers, they can be suitably menacing when the time comes. Jun Kunimura is a reliable, charming presence as the cop who is tough on his grandson but impressively dedicated to protect his town.  [source]

At this point, the LA for Jojo’s Bizarre Adventures has a mix of positive and negative reviews. [Currently, enjoys a 7.0/10 user rating on IMDb]

How about you? Have you seen the movies already? Let us know what you think!