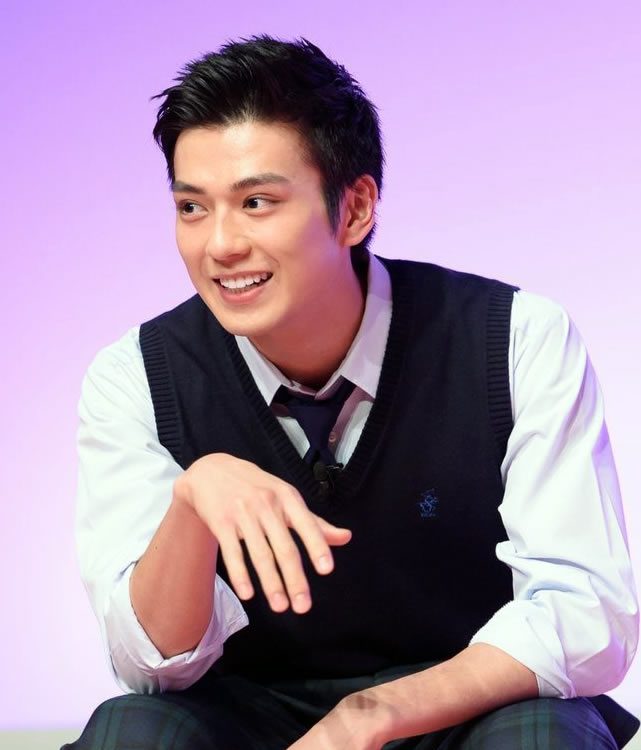 As of May 2017, he is officially known as Arata Mackenyu – not ‘Chiba’ or ‘Maeda’ as he was previously called by the Japanese media. He also announced that Top Coat will handle all his acting commitments. If previous performances in Chihayafuru, WOWOW’S Yume wo Ataeru (with Komatsu Nana), and Aogeba Toutoshi are any indication of his competence and commitment to his acting career, then we’re all in for an adventure!

While it seems that the locals (including his co-stars in TBS drama Aogeba Toutoshi: Murakami Nijiro, Taiga, and Kitamura Takumi) were fascinated with his command of the English language, and amused with his Beverly Hills high school education, any ‘special treatment’ – if any – ends there. [see interview excerpts in this video.]

Unlike most South Korean celebrities (including movie actors) who regard exposure or ‘press’ in Western media to be worthy of some attention, their Japanese counterparts usually don’t. In the case of Mackenyu, he is bucking the trend of ‘testing the waters’ for an exclusive Hollywood acting career. Instead, he’s settling down in Japan to concentrate on local productions. Of course, it doesn’t hurt that he’s part of the Pacific Rim franchise! It’s not every day that an actor gets to interact with the likes of Guillermo del Toro and become part of a critically acclaimed (and/or box office hit) film.

More than anything, I have a passion for acting. When I am in front of the camera, I feel calm for some reason. Maybe its the place I like the most. Cozy place. I think that here is where I should be. [source]

As to be expected of Japanese actors who want to work in Hollywood, roles are either – a Japanese-American, perhaps playing a historical character or a contemporary young guy in school or doing karate or sword fights or even a mix of sorts. Before the release of Chihayafuru in 2016, Mackenyu finished two films in America.

In ‘Take A Chance’, Mackenyu plays a disillusioned young man who was forced to go to America, practice full-contact karate, and fight.

Here are some details about this film:

Take a Chance, based on a true story, follows a wayward Japanese teenager’s journey of survival and self-discovery in the American South. When we meet Masataro, he has been rejected by all four colleges he has applied to. Like many young people, whenever he faces an obstacle, he looks for an escape or change of direction. He tells his father, a highly successful business owner, that he wants to go to music school instead. But his father, who wants his son to wake up and find his own path, has a much different plan in mind. Shihan Oyama, the father’s former Karate master, had moved to the United States over 40 years ago. He now runs a traditional Karate dojo in Alabama. Young men from across the globe continuously seek him out for his reputation as a disciplinarian, and his success in training Japanese full-contact Karate world champions. In keeping with historical tradition, he also takes in Uchi Deshi. Masataro’s father tells him that if he wants to go to music school, he has to first complete 100 days as an Uchi Deshi. [read more]

In Tadaima, He’s George – an angry, frustrated young Japanese whose family was incarcerated at the height of WW2.

George, Akiko, Kaori, and Kazuo return to their former house in the summer of 1945, following the end of World War II and the closure of the Japanese American Internment camps. Arriving home, they find the house ransacked by vandals and in a state of disrepair.Emotions flair and each individual member of the family react differently to the homecoming.  While rebuilding their home, the family is able to recover a “takarabako” – a chest of memorable items that had to be left behind before the evacuation, bringing the family closer together.  As the day draws to a close, there is a glimmer of hope that the future holds better days.  TADAIMA honors the legacy of Paul Takagi, 92-year old former internee, WWII veteran, Berkeley Professor Emeritus, and the Director’s grandfather. [source]

Mackenyu won Best Supporting Actor at Asians On Film Festival in 2015 for this movie.

アカデミー賞新人俳優賞
頂きました。
応援して頂き、ありがとうございます。
Japan Academy Film Prize
Won “The newcomer of the year” award.
Honored.
Thank you so much. pic.twitter.com/zC5S4Enhy2

But his role as Arata in the live-action adaptation of Chihayafuru further his stake as an upcoming dramatic actor. The almost perfect characterization and physical transformation of Mackenyu as Arata are probably the reason why he got The Japan Academy Prize ‘Rookie of the Year’ award.

Chihayafuru is about Chihaya Ayase (Hirose Suzu), a girl who has spent most of her life simply supporting her sister in her model career. Things change when she meets a boy named Arata Wataya (Arata Mackenyu), a talented karuta player. He thinks that Chihaya has a potential to become a great player. As Chihaya takes on a new dream of becoming Japan’s best karuta player, she is soon separated from her karuta playing friends as they grow up. Now in high school, Chihaya still continues to play karuta in the hope that she will one day meet her friends again.  [source]

Top 3 acting performances: As Arata in the live-action Chihayafuru, As George in the short film about a Japanese-American family incarcerated during WW2, as Ren in the school drama Aogeba Toutoshi. [I’d like to add his role in the American film Take A Chance.]

Projected future top performances: As Naozumi in the upcoming car rally movie Overdrive headlined by Higashide Masahiro. Two projects – Jojo’s Bizarre Adventures and Fugitive Boys may be up for some acting recognition since Mackenyu’s roles are both interesting and challenging.

His father Sonny Chiba is considered one of Japan’s most popular and hardworking actors, known for his martial arts roles.

Mackenyu joins Top Coat, which means he is agency-mate of Suda Masaki and Matsuzaka Tori, among others.

He started playing the piano at the age of 10, followed by saxophone and flute.

Actors' Bias Beyond the Frame Cross Talk Drama Features Food for Thought Generation NEXT Hitlist LA Movie News Roundup Next Break Novel On the Way Platform Reviews Thoughts and Things TV & Film Youngbloods
Privacy & Cookies: This site uses cookies. By continuing to use this website, you agree to their use.
To find out more, including how to control cookies, see here: Cookie Policy
wpDiscuz
1
0
Would love your thoughts, please comment.x
()
x
| Reply
Go to mobile version