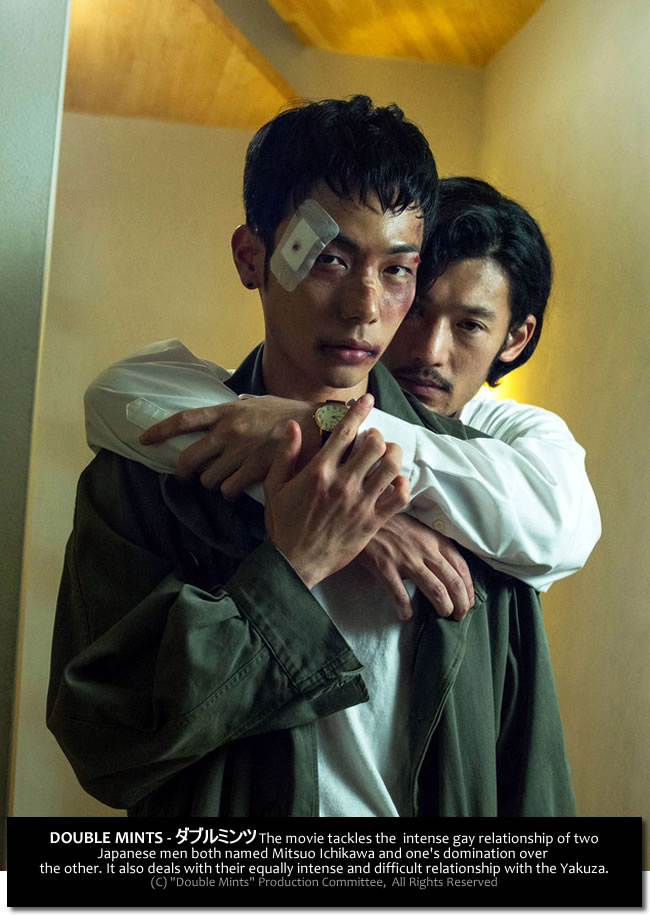 Double Mints, the latest directorial project of Uchida Eiji (Low Life Love, Greatful Dead) is a tale of two Japanese men named ‘Mitsuo Ichikawa’. The movie tackles both men’s intense gay relationship and one’s domination over the other. It also deals with their equally intense and difficult relationship with the Yakuza.

The live-action movie was crowdfunded and is based on the manga by popular Yaoi author Nakamura Asimiko. Asimiko is famously known for her work in Doukyusei (同級生- “Classmates”) which was made into an anime last year and earned significantly at the box office.

“I’ve killed a woman.” The domineering voice on the phone was that of a high school classmate, Mitsuo Ichikawa. Buried memories from the past resurface in the heart of a man with the same name, Mitsuo Ichikawa. It drags him right back into the passions of the past. They reunite as accomplices, yet their relationship as master and servant slowly changes into something new… [source]

I had the opportunity to screen the movie and will post a review in a few days.

The production cast 2 sets of actors to play Mitsuo Ichikawa:

Tanaka, a member of the idol group “Boys and Men” had the most difficult part. Not only is he required to do sexy, intimate scenes with Yasushi (who looks like Eita), but also has to endure torture and rape.