Food month continues – perhaps for another 2 or 3 weeks – and I have very good reasons why. There are plenty of excellent foodie drama, and anime I wish to review and rave about. Of course, there are a few more movies I want to mention too!

Before I discuss any further, I’m inviting you to join our quiz above! Correct answers are highlighted in green.

While Halloween is coming up, I think there will be plenty of time to post our upcoming Supernatural month at the middle of October.

After Food month, which theme are you most interested for PD to do next?

Foodie drama – both released recently, and those from the past are just too good to ignore. I still need to release the final installment of The Emperor’s Cook review too!

A lot of people outside Japan love Mondai no Aru Restaurant, and there was a write-up featured in a Chinese site about it. The Global Times was quick to point out:

Mondai no Aru Restaurant (“A Restaurant With Many Problems”), a Japanese television drama about a group of women who open a bistro to combat male chauvinism in society, has reignited debate on China’s social media networks about gender roles in Chinese society. Discussion around the show, which has been available online since January, has popularized a new term among China’s microblogging community: “Straight Woman Cancer.” The term describes women who deliberately conform to the idea that an “ideal woman” should be demure, domesticated, and have no other goal in life than to serve the needs of men. [source]

Since we’re actor-intensive site (i.e. we love talking about Japanese actors and their acting styles), the major attraction of this drama is the cast.

The FujiTV show has 10 glorious, inspiring, irritating, and gripping episodes that feature one of the most talented ensemble cast – Maki Yoko, Nikaido Fumi, Matsuoka Mayu, Takahata Mitsuki, Suda Masaki, Higashide Masahiro and Yasuda Ken. If 2014 has produced the likes of Wakamonotachi and N no Tame Ni, then 2015 has Mondai no Aru Restaurant – enough said! [read more]

This drama features women of various age, lifestyle, philosophy, education, and experience. It would have been a futile attempt if given to inferior actors but the selected cast rose to the occasion and nailed it – giving life to a band of misfits who seek revenge and self-respect. Let’s mention a few of these characters, shall we?

Takahata Mitsuki plays Kawana Airi, a supposedly ‘bimbo’ who gets played at by the dominating male members of the restaurant. However, her ‘easy’ character is hiding behind a solid and strong interior. This drama was released before her stints in Tokyo Sentimental and Toto Nee-Chan: Fatherly Sister, both shows established Takahata as a force to be reckoned with in Japanese drama.

Matsuoka Mayu, on the other hand, is Ameki Chika, who comes from a broken family and refuses to ‘bond’ with her co-workers. While the term tour-de-force is more likely a cliche’ already, her performance in this drama is just that! As Higashide Masahiro’s competitor, Matsuoka’s Chika has produced some delectable and heavenly dishes which remain quite vivid in the audience’s imagination until now.

Of course, there’s a lot to be said about Nikaido Fumi and her role as the academic, yet unsure Nitta Yumi. She has done plenty challenging roles in both cinema and drama, and her take as the insecure University graduate who can’t find a decent job is especially refreshing, and a reminder of her capacity as a formidable actress.

Hondana Shokudo – 本棚食堂 (also known as Bookshelf Restaurant) is a surprisingly good drama starring Nakamura Aoi and Emoto Tokio. Nishiki (Nakamura) and Jiro (Emoto) are mangakas who are popular with female readers due to their work in the romance genre. They are known collectively as “Himekawa Rosanna”, who authors the in-demand ‘Awkward Moment’ manga. 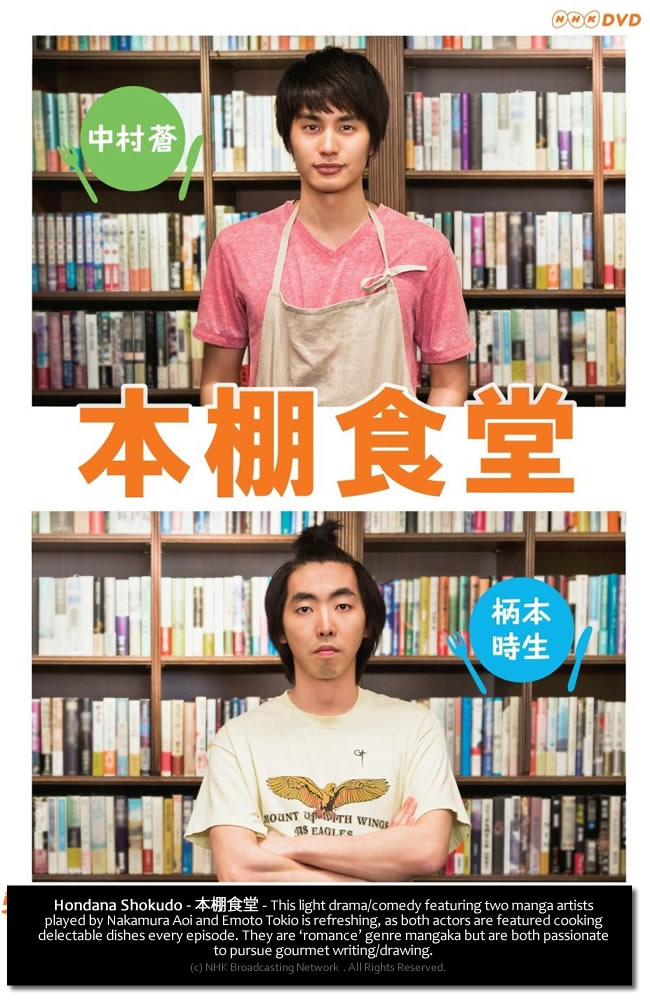 However, if they could, they’d rather draw gourmet instead. You see, when they are pressured by deadlines, they leave the drawing boards to select a few of their favorite dishes out of their massive manga library.

It’s important to note that Nishiki and Jiro divide the drawings between them – Nishiki draws all the male characters and Jiro takes care of the girls. There is also a backstory why – Nishiki grew up in a predominantly female household, and refuses to draw female characters out of his experience.

Mi wo Tsukushi Ryouricho stars Kuroki Haru as a talented cook in 18th century Japan. If you think about it, Kuroki plays the wife of Akiyama Tekuzo in the critically acclaimed drama The Emperor’s Cook. As Takahama Toshiko, midwife and a dedicated housewife to Tekuzo. It’s about time that Berlinale’s Best Actress winner is given a drama of her own where she plays the cook! 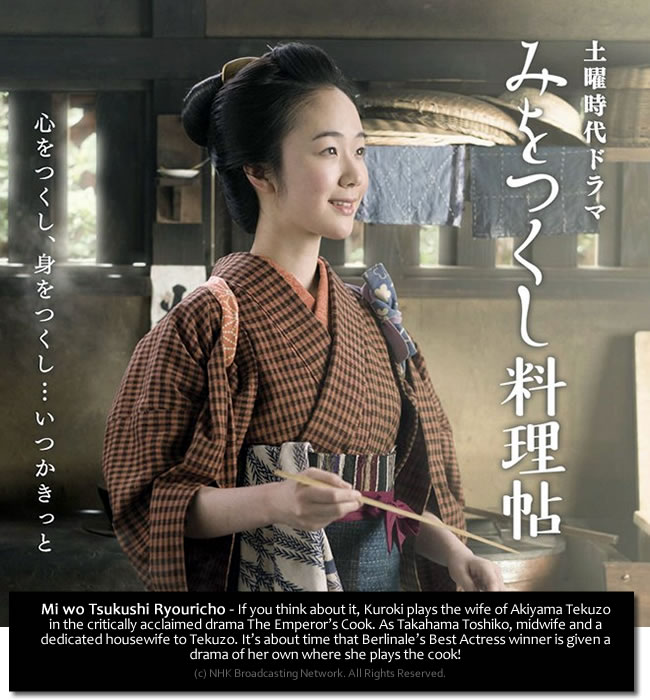 Jdrama has the details about the show, with the synopsis below:

In 1802, 8-year-old Mio lost her parents in a river flood in Osaka and feels all alone after she is also separated from her childhood friend Noe. She is saved by Yoshi, the proprietress of Tenman Icchoan, one of Osaka’s famous restaurants, whom she happened to meet. Mio begins training as a cook because of her gift for taste in a time when females were still banned from the kitchen. However, the restaurant was burnt down in a fire and she sets off for Edo with Yoshi and her husband Kahei. By some lucky coincidence, they are invited by Taneichi, the owner of Tsuruya, to work at his soba shop. [read more]

Among the features of this drama is the fascinating (and sometimes intriguing) interplay between three of the main characters – Kuroki’s Mio, the samurai Komatsubara (Moriyama Mirai), and the physician Nagata Gensai (Nagayama Kento). You can say, it’s a love triangle but executed in a subtle way. The fact that we have three excellent players here has leveled up the acting as well.

On the kitchen front, Mio, the crew, and her restaurant are contesting with the best of Edo. Her competitive nature and gift of taste enable Tsuruya (that’s the restaurant’s name) to lord it over the rankings, but at a certain cost. Just like in modern times, there are characters that can affect customers and reputation – a food critic, is one of them. In 18th Century Japan, it’s not the city’s aristocracy who influence dishes and tastes, but the shogunate.

Plenty more Foodie drama and anime to talk about up next!

How about you? Do you have any particular Foodie drama favorites? How about Foodie anime? Let us know what you think!