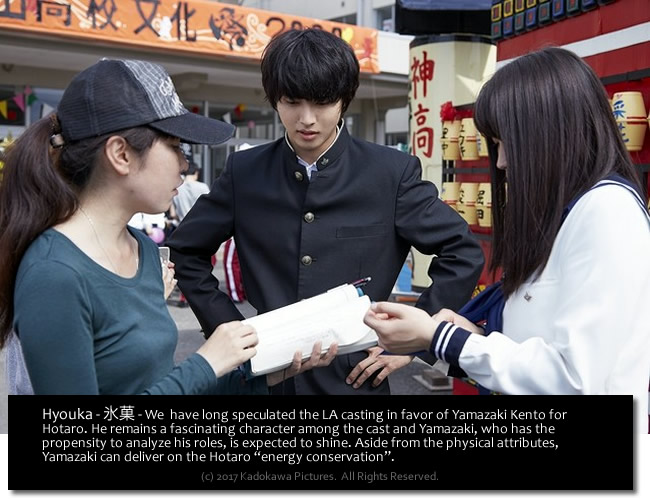 Kadokawa Pictures spearheads the live-action adaptation of Yonezawa Honobu’s novel Hyouka – 氷菓 – about four freshmen who discovered a certain ‘anthology’ published 33 years ago by the Classics Lit club, where they belong. Yamazaki Kento and Hirose Alice play the main characters. They investigate the past and in turn discovered what happened previously to former students (and members of the club) and its impact on the school. The movie was released November 3, 2017, in Japan.

Freshman Oreki Hotaro (Yamazaki Kento) applies for membership of the school’s Classics Lit. Club upon the prodding of his older sister and meets Chitanda Eru (Hirose Alice). Chitanda has a particular knack for mysteries and to Hotaro’s surprise, they began to collaborate as ‘investigators’ until they chance upon an ‘anthology’ published by the club 33 years ago. The said anthology occurred during a tumultuous time in Japan’s history and involved a relative who suffered tragic consequences as a result of a certain ‘school activity’.

Energy-conservative high school student Houtarou Oreki ends up with more than he bargained for when he signs up for the Classics Club at his sister’s behest—especially when he realizes how deep-rooted the club’s history really is. Begrudgingly, Oreki is dragged into an investigation concerning the 45-year-old mystery that surrounds the club room. Accompanied by his fellow club members, the knowledgeable Satoshi Fukube, the stern but benign Mayaka Ibara, and the ever-curious Eru Chitanda, Oreki must combat deadlines and lack of information with resourcefulness and hidden talent, in order to not only find the truth buried beneath the dust of works created years before them, but of other small side cases as well. [source]

Highlights: Kyoto Animation did a 22-episode anime that aired in Japan in 2012. It features selected stories from Hyouka, which is actually, the first book in the series. As of today, there are six books in the Classic Literature Club (古典部 Koten-bu) series, including Hyouka, Closing Credits of the Fool, The Order of Kudryavka, The Hina Doll that Took a Detour, The Approximation of the Distance of Two, and Even Though I’m Told I Now Have Wings. Crunchyroll reports:

Hyouka is Yonezawa’s debut novel published in October 2001, and the first volume of his Koten-bu/Classic Literature Club series that has printed over 2.05 million copies in total so far. [read more]

Hyouka serves as the introductory book revealing the nature of the series as a coming of age, slice-of-life, youth mystery-investigative mix genre. Aside from Hotaro and Chitanda, the two other main characters are Mayaka (Kojima Fujiko) and Satoshi (Okayama Amane).

PD admins and friends have long speculated the LA casting in favor of Yamazaki Kento for Hotaro. He remains a fascinating character among the cast and Yamazaki, who has the propensity to analyze his roles, is expected to shine. Aside from the physical attributes, Yamazaki can deliver on the Hotaro “energy conservation” charm and analytical prowess as a student yet still an amateur detective. His close personal friend Okayama Amane (whom he recently made an appearance in Amane’s indie flick) is expected to take advantage of his relationship and level up the Hotaro-Satoshi onscreen chemistry.

Hirose Alice was a surprise casting, but her previous and excellent performances convinced this author that she can be an acceptable Chitanda. The character has an insistent, in-your-face honesty that allows her to get what she wants and Hirose can deliver on that.

Trailer Impressions: Fans of the books and/or the anime will look forward to the LA just for curiosity’s sake and it can go either way. Kyoto Animation has successfully produced an anime with a particular mood that is part mystery, part slice-of-life, and the usual youth/school drama antics thrown in for good measure. The anime follows in the tradition of their previous work (Beyond the Boundary comes to mind). I got a ‘sense’ of those in the trailer.

With the recent success of Your Name (Kimi no na Wa), some people have begun to expect later productions to feature leading (or at least rising) Japanese rock bands. It adds a certain oomph to the overall viewing experience.

Lending their musicality to the LA is Itowokashi, a rising rock band who just recently performed on their first tour. [ watch and listen to a sampling of their sound here ]

Thoughts: Asato Mari, the director, is known for horror/thriller movies, so I’m concerned if she has what it takes to create a visually appealing and intelligent film.