In Tremble All You Want, Matsuoka Mayu plays Yoshika, an imprudent, quirky character who at 24 is still stuck up in the past.

Based on the novel “Katte ni Furuetero” by Wataya Risa, the live action is directed by Ohku Akiko and released by Phantom Films.

Entered into competition at the recent Tokyo International Film Festival, the movie explores a young woman’s issues in a dream-like atmosphere – a bit surreal – yet honest, even romantic, in its depiction.

Eto Yoshika works in Accounting and studies extinct species on Wikipedia. She has no boyfriend (and never had) and is a virgin. She was a loner in high school, which continues to this day as she lives in a neat one-room apartment. She draws manga, calls the main character ‘Natural Born Prince’, patterned from a classmate Ichi (Kitamura Takumi).

Ichi is the love of her life, she tells that to anyone who would listen. Such conversations are similar to ‘therapeutic’ sessions with the only difference that it involved more than one audience – the helper lady, the physical therapist, the waitress at a cosplay-inspired cafe, the railway security, the crew at the convenient store and the old man (Furutachi Kanji) who fishes at the bridge on the way to her apartment. They all became privy to the ‘World According to Yoshika and her Undying Love for Ichi’.

Yoshika’s solitary existence is about to change when an officemate arranges an after-work ‘get together’.  Marketing guy, Kirishima Ni (Watanabe Daichi) appears to be smitten by Yoshika. She once lectured the guy on the proper way to fill up an expense claim report!

Ni declares his romantic intentions but our heroine demurs and remains noncommittal. Using a similar strategy, Yoshika devises a plan for a high school reunion, and in the end, meets Ichi. 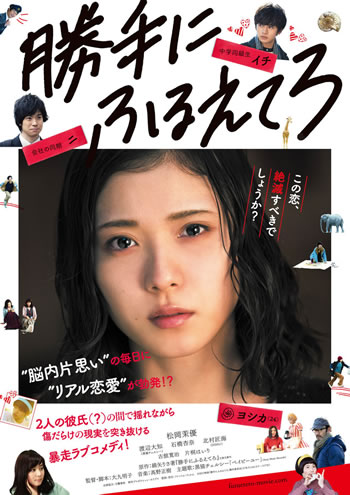 Tremble All You Want, despite the weird English translation, actually, relates to a scene involving Matsuoka character and the guy whom she eventually ended up with.

Ohku’s films have a specific flavor and theme – Monster, Tokyo Serendipity, and Fantastic Girls deal with young women’s coming of age. In contrast, Matsuoka’s Yoshika needs no plastic surgery (as Masako needed in Monster to impose her revenge), has yet to find an audience for her manga (Ayuko is a well-known mangaka in Fantastic Girls) but somehow share similarities with Aragaki Yui in Tokyo Serendipity as a loveless lass.

If anything, this movie validates Matsuoka’s coming of age as an actress. Her potential has been slowly realized in roles such as Sana in The Kirishima Thing, Yumi in Samulife, and Shinobu in Chihayafuru.

As her first leading role, Matsuoka is Yoshika, in as much as the fictional character is quirky and unsophisticated. She even had the chance to sing – which is one of the film’s highlights. Then there the ‘side-sight, a lateral point of vision’ invention! (staring at Ichi while not exactly looking directly). No wonder novelist Wataya Risa won plenty of awards for her novels!

Both her leading men, Kitamura Takumi and Watanabe Daichi, complemented Matsuoka in every scene and made the viewing experience funny and heartfelt. This movie raises the age-old question of Would you rather be with the one you love or one who loves you? (that sounds a bit cliché but then isn’t our lives filled with clichés too?).

Running at 117 minutes, it may be a bit long, some scenes could have ended up on the cutting board, yet the surrealistic mood could not be so easily attained. There are plenty of juvenile youth-romantic films coming out of Japan nowadays and they left viewers empty.Tremble All You Want offers an alternative that is both substantial and entertaining.

Actors' Bias Beyond the Frame Cross Talk Drama Features Food for Thought Generation NEXT Hitlist Indies LA Movie News Roundup Next Break Novel On the Way PD-RADAR Platform Reviews Thoughts and Things TV & Film Youngbloods
Privacy & Cookies: This site uses cookies. By continuing to use this website, you agree to their use.
To find out more, including how to control cookies, see here: Cookie Policy
wpDiscuz
2
0
Would love your thoughts, please comment.x
()
x
| Reply
Go to mobile version
Loading Comments...