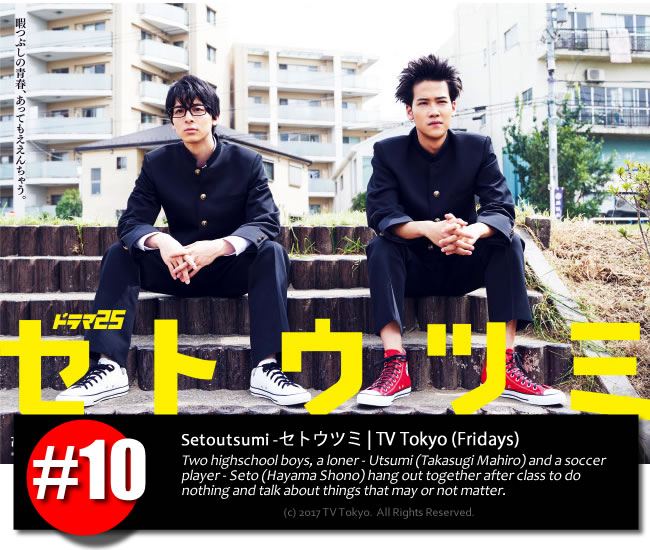 Drama viewing becomes an enriching experience if you find the right drama for you. The problem is, once you pick a drama or two, you have to make sure someone is going to sub it.

With approximately 150 Japanese drama produced annually, only about 30-40 have been ‘endowed’ with an English subtitle. This figure nosedives, even more, when it comes to other languages. There also exists a few LiveJournal accounts who compel people with unreasonable requirements just to download their precious subs – and the arrogance is epic!

That’s the thing with Japanese dorama nowadays. However, there remains plenty of excellent (and nice) subbers and subtitled drama to chose from and Fall 2017 season appears to be an exciting one.

Takasugi Mahiro and Hayama Shono follow up a successful duo in Ikematsu Sosuke and Suda Masaki for the LA movie of Setoutsumi. What makes this drama interesting is how both young actors take on their characters. Only in Japan, would anyone attempt to make a drama where the subject is two boys doing nothing!

Imagine this: Fujioka Dean harassing witnesses and suspects, while the next scene features a much improved Takei Emi. I’m not a fan of Takei but her latest drama appeals to me because I expect some amazing chemistry between the two. Imagine this too: Kaho and Sometani Shota had a lot of fun in Minna ESPer Dayo, so why not make them a couple in a suspense-thriller directed by Kurosawa Kiyoshi? Also, this time, Sometani reunites with a long-time peer, Higashide Masahiro who plays an alien – remember Parasyte?

Hongo Kanata has two major projects this season – Love Concierge (Season 2) and Akagi (also on its 2nd season), so I have to choose one and Akagi brings more thrills to the table. I’d rather watch a Kanata playing mahjong rather than giving some love advise, but then again, who am I to force you to choose only one?

Ranked #6 and #5 are dramas dominated by the female cast – Koizumi, Mitsushima, et al for Prison’s Princess and Ayase, Hirosue for  Caution, Hazardous Wife! Both offer exciting, relevant premises regarding women’s issues and both deserve our attention!

After totally ignoring past broadcasts, PD attempts to return to doramaland by choosing a top 10 most anticipated series – chosen based on the cast and crew reputation, engaging storyline, and just over-all impression of the actors’ on-screen chemistry and director’s ability to keep them in control (i.e. stop them from recurring over-the-top acting). Of course, much of the success also rests with the screenwriters. No matter if its a fantasy drama or medical or crime or slice of life, there is a need to have some logic – where people will NOT roll their eyes or scratch their heads and ask WTF happened.
Note to some fans: I intentionally omitted listing Doctor X and the Sakurai Sho drama because they are both highly recommended already by plenty of people (both experts and otherwise). jadefrost @Jdrama is my major reference to come up with my drama selection. If you want to get more details, here’s the link!

Inoue Mao, who made The Snow White Murder Case, such an appealing movie to watch returns to – perhaps a similar role – in Tomorrow’s Promise. The fact that Nakama Yukie (remember Gokusen?) is cast alongside her is enough reason to anticipate this drama. An acting showdown looms on the horizon!

Imagine this (Part 3): Tadanobu Asano, one of Japan’s iconic actors, teams up with the acting child prodigy Kamiki Ryunosuke and in a detective drama at that! Just the cast alone is enough to whet any dorama fan’s appetite.

After a few seasons, Kounodori returns and so is Baby, and he loves playing the piano! So the white gang of healing returns – Matsuoka Mayu, Sakaguchi Kentaro, Hoshino Gen, and Yoshida Yo among others. I don’t expect anything less than awesome! Sharing the #2 ranking is the final installment of the Moribito: Guardian of the Spirit saga from NHK. Yes, that makes a double whammy for Ayase Haruka.

When a TV series cast someone like Watanabe Ken or – in this case – Yakusho Koji, they mean business! The 90+ minutes opening episode promises to be the start of an engaging, delightful, thrilling and intense drama since aside from Yakusho, they got Yamazaki Kento and Takeuchi Ryoma playing substantial roles. Rikuoh, what is there to ask for more?