Lowlife Love, produced by Adam Torel’s Third Window Films, written and directed by Uchida Eiji, tells the story of an indie filmmaker – Tetsuo (Shibukawa Kiyohiko) – who refuses to compromise his artistic integrity and submit to the commercialization of his craft.

After producing a minor hit a few years back, he struggles with his personal life and career until an upcoming actress, Minami (Okano Maya) and a promising scriptwriter, Ken (Oshinari Shugo) enter the scene.

Shy and naive but determined, Minami travels to the city to realize her dreams of becoming an actress. At Tetsuo’s acting school, she met Ken, who wrote a script that could be the launching pad for her career. During the audition, Tetsuo became excited with Minami’s prospect as a dramatic actress and considers Ken’s script to be his ticket to acclaim and return to form. Seeking financial support from an unscrupulous producer Kida (Denden), Tetsuo assembles his cast and crew to start the biggest project of his career.

However, other forces are at play – a seasoned, veteran actress, Kyoko (Uchida Chika) plots to introduce Minami to other, more influential filmmakers. Kyoko is one of Tetsuo’s regular cast members who was once promised a title role. Minami herself is not so naive as Tetsuo made advances to her, promising stardom, until she eventually leaves, shattering Tetsuo’s dream project.

His loyal supporter and friend, Mamoru (Hosoda Yoshihiko) also have something to reveal. While he champions Tetsuo’s often disregarded acting students, he also helps in raising funds but soon realizes that his clients are not so easily fooled.

Tetsuo projects himself as a principled independent filmmaker, yet he exploits his female students to no end. He has little regards or respect for them. As the movie title suggests, he’s the ultimate lowlife, and there is no love to be seen anywhere at all. Or is there? Indeed, while his current lover surrenders her savings and prostitutes herself to add to the film budget, it was his longtime sidekick Mamoru who offers a different kind of love that Tetsuo hesitantly and finally accepts in the end. 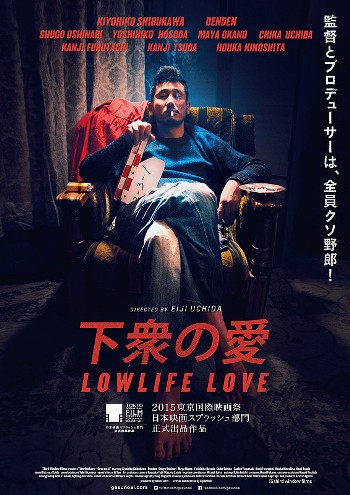 Uchida Eiji’s script and the stories behind Lowlife Love confirm what’s going on at the very low-end of filmmaking in Japan. The promise of sex, the very exploitation of sex figures prominently in the film.

We often hear of rumors involving filmmakers or producers or in some high-profile cases, powerful agents and talent managers using their influence to bed unsuspecting talents – whether boys or girls matter very little. The same case can be said of filmmakers who prefer commercial projects backed by powerful studios. Why struggle with financing and rejection when there’s a production committee to solve all these problems? Maybe creative control? Freedom of expression?

Perhaps, John August, a scriptwriter/director has the answer:

I’d argue that the term “independent film” should be reserved for talking about the movie itself, rather than how it was financed. There’s a reason the word “independence” so often shows up in proximity to “revolution” — a shared spirit of frustration, anarchy and apple-cart-upsetting. From their conception, independent films aren’t just made outside of the studio system. They are made in opposition to the studio system, with its relentless need to round off the corners and soften the blows. And in standing against the status quo, independent films help to change it. [read more]

It was Adam Torel himself who gave three important reasons why Japanese cinema is now regarded as less prestigious than Chinese or Korean films. His critical stance did not end there, he shows proof by producing this independent film.

Special thanks to FilmDoo for this review opportunity. You can watch the film from FilmDoo here!