While the name Nishijima Takahiro might not ring a bell for most fans of Japanese cinema, the guy has been around for quite some time. Just not in the way you’d most expect him to.

More commonly known as Nissy, Nishijima is one of the main male vocalists of Avex’ co-ed pop group AAA (Triple A/Attack All Around). The group’s known for their incredible live shows, and solid performances; and is celebrating in their 11th anniversary as a group this month. Together with that, Nishijima himself will be celebrating his 30th birthday on September, 30th. All the more reason to put the spotlight on this special gem’s career.


It’s definitely been a while since AAA debuted as an 8-member group in 2005. While their initial concept made them a dance and vocal unit consisting out of only one female and two male vocalists with an additional rapper, the group has grown to be a stable all-round crew where none of the currently seven members are left out in line-distribution or stage presence. Eleven years, nine full length albums, six EPs, 70+ music videos, 50+ singles, 18 live-dvds and uncountable tour-dates, shows, and performances later, it’s undeniable that AAA has created a huge following. Now with seven members and a 11 year long career there’s bound to be other things they’ve been focusing on individually. Some members spend their time off traveling, while other use it to build up their own solo careers. Nissy himself, he doesn’t seem to be satisfied with just one thing.

“My dream when I was in elementary school was to become a magician. I want to do everything that will make everyone happy.” (Asahi newspaper digital)

But back to something that actually fits this website a bit better: acting. Nishijima first started acting when AAA had barely even taken off. At the age of 20 he got the lead role in a drama series called Delicious Gakuin for which the group’s 14th single, the double A-side Kuchibiru Kara Romantica/That’s Right was used as a tie-in. Think Shokugeki no Soma, but then in a live action form. He was joined on the project by fellow group member Atae Shinjiro, as well as Kamen Rider alumni Miura Ryosuke, Nakamura Yuichi, and Tenimyu’s Aiba Hiroki. While the drama itself never really got into the spotlight, it perfectly showed the quirky nature of the singer-turned-actor and gave us a clue about possible future endeavors.

Nishijima has always been known for attacking – in a way staying true to his group’s name – all kinds of subjects. As a natural entertainer it wasn’t much of a surprise that, though still inexperienced at the time, Nishijima was given a chance to learn acting through stage plays. First on the list was the group’s own Theatre of AAA ~Bokura no Te~ which debuted in 2006. It was followed by a variety of projects including 2007’s Love Letters and 2008’s Harold and Maude, totaling to a series of 10 stage play casts in-between 2006 and 2012.

His first non-stage project came sooner than expected as Nishijima ended up being cast as the lead for Sion Sono’s 2009 movie Ai no Mukidashi, more known under its English name Love Exposure. The nearly four hour lasting movie was said to be an “epic tale of love, family and religion”, but after its release it was made clear that it broke all boundaries between genres, and if you’d not pay attention for even a little bit you’d suddenly be catapulted into a whole different movie. Nishijima got a lot of praise as well as a few awards for the role while the movie itself went on to do the same as its cast. Watching part of the behind the scenes alone has made it clear that as an actor he doesn’t hold back when getting into a role. Even after sustaining an injury on set and being told to take it easy so he’d be able to heal up more quickly, the then 22 year old Nishijima just went right back to filming. No bruises, broken glass, little sleep, and even the cold weather could keep him from being as dedicated to the role as he’d been to any other job to the point where he even mentioned that if he couldn’t at least do that much as an actor, he had no right to be on set. 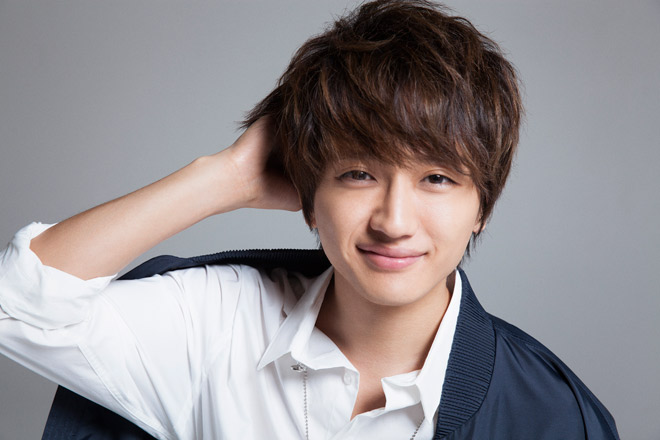 The release of the movie also saw Nishijima’s return to theatre a few years later as renowned director Ninagawa Yukio had gotten interested in the entertainer’s skills, inviting him to be a part of his next project Shitayamanenchou Monogatari. The director seemed to have taken a liking to the pop group vocalist, realizing through working with him that singing wasn’t his only strong point. He wanted Nishijima to surprise him. To show him things he wasn’t capable of doing himself. (Ninagawa Yukio sadly passed away earlier this year before the two of them could work together again. He was 80 years old.)

“I was told by him, ‘quit music and go to the world of acting immediately. Let’s work together soon’. But it never fit my schedule. It’s such a shame. I’m sorry.”

With another drama lead as Hayami Kaito in the NHK series Ghost Friends, a movie lead in Soup Opera, as well as a small part in Sayonara Itsuka along fellow member Hidaka (SKY-HI) and a guest-role in Gakeppuchi no Eri, Nishijima’s acting career just kept on growing. Through the course of 2010 he didn’t only take part in various acting projects, but also had multiple single releases of his group AAA, in addition to a full length album recording. If that wasn’t enough to keep himself busy yet, then a 26-dates nationwide tour from March to May together with a couple of summer shows and a fifth anniversary live in September probably would have added to that. One of his roles that year, Hino Tetsuya in Tumbling, required additional training and practice, making sure that he was able to join the rest of the cast in their many different tumbling performances.

“Because the producers aren’t employing stunt doubles, everyone had to learn the moves and do them for real. In Hino’s case, he’s a national representative so he’s already a pro right from the get-go which only means there’s a lot of pressure for me. ‘Toss, flip and grab!’ is what I repeat to myself like a mantra in my head. […] If you don’t toss it just right, you can forget about catching it. Whenever I fail in catching it, I’d get so frustrated sometimes I’d go, ‘Why won’t you just cooperate?!’ I know it’s silly to blame what I’m working with but I can’t help feeling like they’ve betrayed me somehow.” (Nishijima on practicing for Hino Tetsuya, his role in Tumbling)

While 2011 brought with it roles in TV-dramas Tare Yori mo Kimi wo Aisu and Diplomat Kuroda Kousaku, it was in 2012 that Nishijima showed a variety of different sides. Next to his few theatre roles and a lead in the movie Signal ~Getsuyobi no Ruka~, the participation in that year’s Taira drama, Taira no Kiyomori, was without a doubt the biggest achievement. A few attentive viewers might have even spot him as an extra in Himizu, another Sion Sono movie, where he had a cameo as a street performer nearly getting attacked by the lead boy. Though Nishijima’s role was very small it confirmed his lasting connection with the director, as well as continues to give hope to fans that they might once work together again.

After one last role in 2013’s Taiyo no Wana, the entertainer fully returned to his first love and main focus: music. It was the same year that rumors of a solo career started popping up here and there though it wasn’t till late 2014 it actually happened. Through the release of a music video Nishijima officially debuted as a solo artist under his nickname Nissy. In the vein of a true entertainer Doushiyouka? became the start of a series of video projects that are all linked to each other through Nishijima’s magician character, one he created off of his childhood dream of being such a performer. After six different MVs incorporating this same idea, the finale came through the release of his first full length album earlier this year, fittingly titled HOCUS POCUS. Challenging himself as usual, Nishijima nearly immediately released another new single and set of music videos, making clear that he won’t be stopping any time soon.

Alongside the release of his first ever solo album, Nishijima came back to the little screen to take part in one of this year’s Getsu9 drama series, Itsuka Kono Koi wo Omoidashite Kitto Naite Shimau, ItsuKoi for short. For his role as Ibuki Asahi, Nishijima received the 3rd Confidence ‘Rookie of the Year’ award. He jokingly mentioned that he was surprised receiving a rookie award in the same year as his 10th debut anniversary, but was very thankful he’d been able to be a part of the production.

Being a person who continuously challenges himself and never thinks he’s gotten to the end of it, I can only imagine what the future of a guy like him will bring us as he will continue to go wherever his mind takes him. Whether it’s acting on stage or on set, singing by himself or as a part of one of Japan’s most successful pop acts, or maybe even something entirely new, only the future can tell. Though, if any of you are thinking he might one day end up voice acting, I’ll have to disappoint you in a been there, done that kind of way. Being the big One Piece fan he is, Nishijima was able to take part in an open recording for a special episode of the anime in 2012. At the same time his group was revealed to be providing the episode’s theme song, a cover of the original opening song We Are!. While asked about the new experience, Nishijima was quoted saying that he’d “love to do it again.” So really, who knows where we’ll see this multi-talented gem next.