TBS Network’s The Emperor’s Cook swept the major trophies at the 8th International Drama Awards in Tokyo back in 2015. Aside from the Grand Prix (Best Drama), Satoh Takeru, Kuroki Haru, and Suzuki Ryohei won major acting awards as well.

In Part One, we have an introduction and some historical notes. Let’s have a recap, shall we?

Based on the novel “Tenno no Ryoriban” by Sugimori Hisahide, it tells the story of Akiyama Tokuzo (1888-1974) who served as Emperor Taishō’s and later Emperor Shōwa’s Imperial chef. He is regarded as an influential figure in spreading French cuisine in Japan and is also referred to as the “Japanese Escoffier”.

Tokuzo is a spoiled brat, who is notorious, annoying and easily gets bored on any activity he joins out of curiosity. His strict father and diligent mother had almost given up hope on whether he can be reformed, but his niiyan (eldest brother) remains his staunchest supporter. Forced into a marriage of convenience, Tokuzo, instead became passionate about cooking when he had his first taste of beef cutlet. Even in his pursuit of becoming the “Best cook of the Empire of Japan”, his arranged wife took it upon herself to support him. Trained in Tokyo, and later in Paris, France, he learned the many secrets and wonders of cooking amidst discrimination, hardship, and rejection. He overcomes it all to be appointed Emperor’s Cook at the young age of 25.

Even after the Russo-Japanese War, at the time there was still remaining prejudice against Asians in Europe, and he (Tokuzo) was often involved in fights in the kitchen. He managed to get through these fights using judo, and these types of situations were often experienced by Japanese who traveled to Europe at the time. Afterward, he also worked for half a year at the Ritz Hotel under Escoffier. He returned to Japan at the invitation of the Ministry of Imperial Household in 1913, in order to entertain the guests from various countries at Emperor Taisho’s coronation ceremony, and was appointed the Master Chef of the Imperial Court the same year at just 25 years of age. [source]

The above quote is part of an article entitled Adoration for the “Sweet France”: Part 1- Cuisine, mentioning respected Japanese cooks and chefs.

The drama is divided into 3 arcs:

Episodes 1-6 parallel the personal and the early beginnings of Tokuzo’s professional life in Tokyo after he ran away from his hometown and left his wife.

So how to become a successful chef? Tokuzo is so being used to get what he wants – at any cost – that his family has begun to doubt him. However, it’s his nature to be a bulldog and push his way into something he wants. After leaving for Tokyo, his brother’s adviser, Kirizuka sensei (Tetsuya Takeda) convinced the head cook (Kobayashi Kaoru) of Kazoku Kaikan (the Peers Club) to take him as an entry-level crew, doing the most mundane of kitchen duties. Kazoku Kaikan is famous for serving Western Cuisine to the city’s aristocracy. He slowly learns the basics, gets the best side of Usami-san, but also earned the ire (or jealousy) of rival cooks, including Yamagami (Emoto Tasuku).

At this point, viewers have to remember that Tokuzo could not have survived his ordeal without the support of his brother, Shutaro (Suzuki Ryohei) who was instrumental in helping Tokuzo settle in the city, among many things.

The mentor-apprentice relationship between Usami and Tokuzo is also material in paving the way for our chef to hone his skills and carve his gastronomic vision. Working side by side, Usami instills the values and principles he learned through the years.

On the personal side, Toshiko refuses to let go of her husband and while pregnant convinces her family that she wants to stay with Tokuzo rather than divorce him. Faced with the prospect of an expanded family, Tokuzo is forced to do double duty to climb the chef ladder, only to be kicked out of Kazoku Kaikan. He has nowhere to go but settles in a little-known diner where things started to go down the spiral.

Is this the end of his culinary journey? This quote from British chef, restaurateur, and television personality Marco Pierre White sums up Tokuzo’s culinary status at this point:

There are many times in my life when I could’ve thrown in the towel. Many times in my life when I was on the floor. And when you’re on the floor, never allow anybody to pick you up. It doesn’t matter how long you stay there, make sure you pick yourself up and dust yourself down. Whatever happens, whether you go home today or you don’t go home today, that’s irrelevant. What’s relevant, is you take the knowledge from the experience and you grow as a person. [source]

Acting Highlights: Satoh Takeru is at the front and center of the show. However, there are moments when he did a lot of over-the-top acting. I’m pretty sure it’s a matter of close directorial supervision, and without knowing who the culprit – since there are 2 directors – is of little value since Satoh was successful on being “in character”.

The most consistent – of course – is Kuroki Haru. Her Best Actress win is well deserved because she was in total control from the get-go. Both dramatic and comedic moments are excellent without exception.

Suzuki Ryohei has a lot of dramatic moments too, but he does it with too much emphasis. The Supporting actor trophy could have gone to Kobayashi Kaoru with his superb performance as Tokuzo’s mentor, and he’s part of the show until the last couple of episodes as well.

Episodes 7-8 represent the Paris episodes where Tokuzo travels to the French capital to learn more about its cuisine under the tutelage of Auguste Escoffier. He also met Francois, a chanteuse, who captured his imagination, and seemingly, his heart. 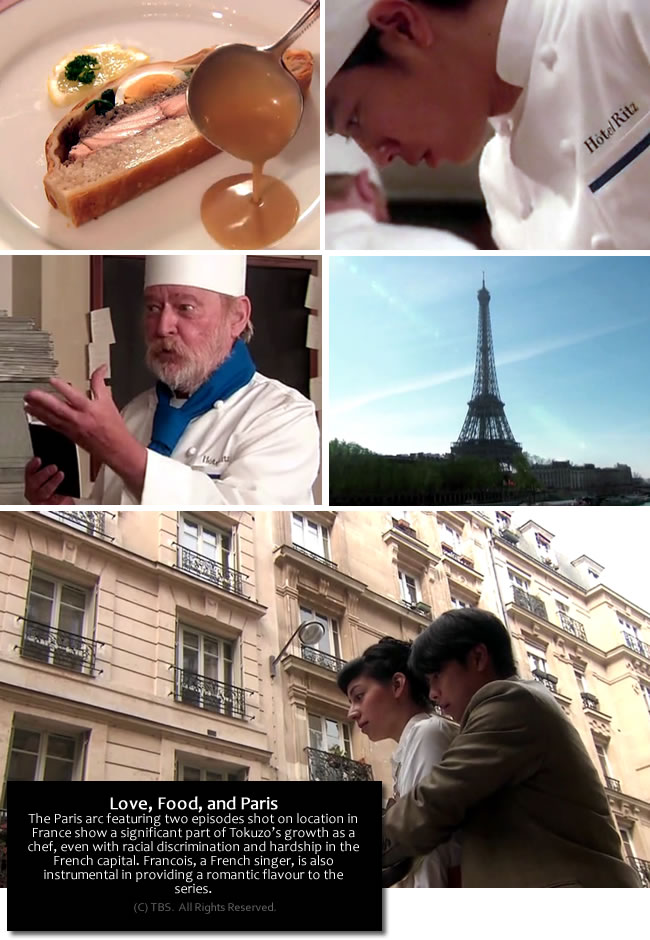 While consisting of only two episodes, the Paris arc showcases a significant portion of Tokuzo’s professional growth as a chef. A sample recipe “Salmon Kulebyaka Tokuzo Style” was featured in Episode 8, highlighting the original Russian dish that inspired Tokuzo, approved by Escoffier himself and which becomes part of the official menu.

Mention of Escoffier in a modern food site is shown below if you want to explore further:

Salmon Kulebyaka, or more commonly known as Coulibiac in the English world, is the original Russian fish pie. It was so popular in pre-revolutionary Russia, that it was exported to France, made famous by Auguste Escoffier, in his cook book The Complete Guide to the Art of Modern Cookery, where it appeared as Coulibiac de Saumon. [read more]

This recipe proves Tokuzo’s growing stature as a chef. Worth mentioning is his romantic relationship with Francois (Sapphira Van Doorn).

As mentioned a few times, Asians are still subjected to plenty of discrimination and Tokuzo is no exception, but his exemplary culinary skills shine through.

His friend from his Kazoku Kaikan days – the enterprising and somewhat ‘opportunistic’ Matsui Shintaro (Kiritani Kenta) provides some comic relief, and his role as one of Tokuzo’s close friends extends into the chef’s return to Japan. Japan’s Ambassador, Awano Shin’ichirō (Go Hiromi) plays a vital part in ensuring Tokuzo’s survival and ultimately his success in mastering French cooking.

Below notes confirms the title as the “Japanese Escoffier”

Of course, the French lady will not join Tokuzo on his return to Japan. What would happen to Toshiko if she did?

At this point in Tokuzo’s culinary adventures, famous chef Anthony Bourdain sums it up perfectly:

Food is everything we are. It’s an extension of nationalist feeling, ethnic feeling, your personal history, your province, your region, your tribe, your grandma. It’s inseparable from those from the get-go.

Episodes 9-12 are the final episodes depicting Tokuzo as the Emperor’s cook, until the painful American occupation, and the portrayal of his family as they struggle for survival and identity. 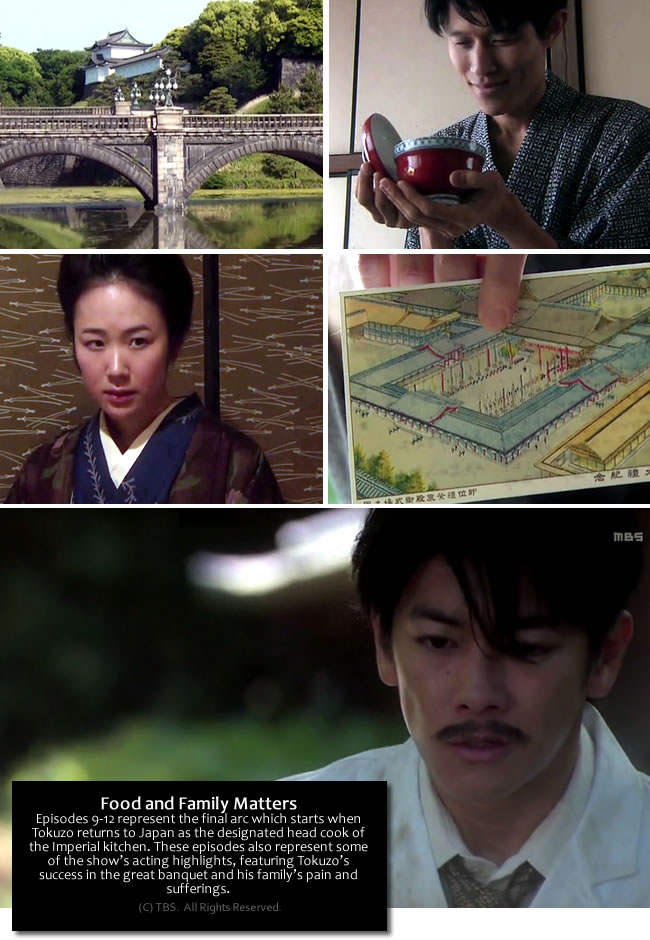 Tokuzo’s triumphant return to Japan is not easy – for a number of reasons:

The senior members of the Imperial kitchen show resistance to Tokuzo’s style of management. Coming up with the official menu for the Emperor’s great banquet highlights the clash of tradition and modernity in cooking;

His family, especially his eldest son, has simply no idea what type of work he does and this lack of communication between father and son is a constant source of conflict. Toshiko is also at her most vulnerable, and the drama show the pain Tokuzo has to go through – being part of the Imperial staff, which means priority of his government duty takes ahead of his own family. The great Kanto earthquake of 1923 highlights Tokuzo and his family’s struggle.

Japan’s defeat in the war means the Americans are in charge, and Tokuzo is required to do the cooking for them. The issue of the Emperor and his trial is especially difficult to the Japanese and here is where a number of episodes provided the type of acting that – for obvious reasons – pave the way for Satoh and Kuroki to dominate the awards season.

The final four episodes are my favorites because Satoh was able to get away from most of the over-the-top acting with a change of style that is dignified as it is honest and dramatic.

The last episode where Tokuzo is joined by his colleagues acting like ducks on water will remain one of the show’s biggest and most powerful scenes.

From a cultural and societal standpoint, I have been born in a country without an Emperor, and I have no idea how people worship one and why many treat their Emperor as ‘god’. This singular scene gave me an explanation that is utterly complete and that’s why this drama is exceptional.

In the last part of this series, we’ll focus on the food and more in-depth reviews. Please stay tuned!