The awards and impressive reviews bestowed on TBS’s The Emperor’s Cook – 天皇の料理番 (released in 2015) may be regarded as unprecedented when it comes to a foodie drama. As it tackles very important milestones in Japanese history, it also puts the spotlight on the status of cooks and chefs in recent Japanese society.

Based on the novel “Tenno no Ryoriban” by Sugimori Hisahide, it tells the story of Akiyama Tokuzo (1888-1974) who served as Emperor Taishō’s and later Emperor Shōwa’s Imperial chef. He is regarded as an influential figure in spreading French cuisine in Japan and is also referred to as the “Japanese Escoffier”.

Tokuzo is a spoiled brat, who is notorious, annoying and easily gets bored on any activity he joins out of curiosity. His strict father and diligent mother have almost given up hope on whether he can be reformed, but his niiyan (eldest brother) remains his staunchest supporter. Forced into a marriage of convenience, Tokuzo, instead became passionate about cooking when he had his first taste of beef cutlet. Even in his pursuit of becoming the “Best cook of the Empire of Japan”, his arranged wife took it upon herself to support him. Trained in Tokyo, and later in Paris, France, he learned the many secrets and wonders of cooking amidst discrimination, hardship, and rejection. He overcomes it all to be appointed Emperor’s Cook at the young age of 25.

Satoh Takeru plays Tokuzo and Kuroki Haru plays his wife, Toshiko.  The drama won numerous awards, including acting accolades. [Part 2 of this series is reserved for that.] 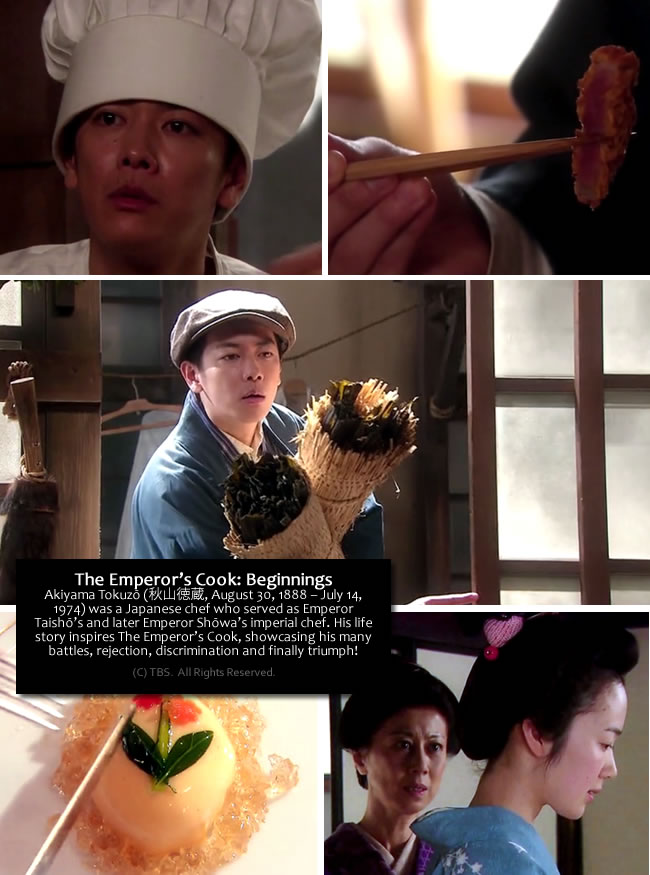 In summary, the drama is divided into 3 arcs:

Episodes 1-6 parallels the personal and the early beginnings of Tokuzo’s professional life in Tokyo after he ran away from his hometown and left his wife.

Episodes 7-8 represent the Paris episodes where Tokuzo travels to the French capital to learn more about the French cuisine under the tutelage of Auguste Escoffier. He also met Francois, a chanteuse who almost joins him on his return to Tokyo.

Episodes 9-12 are the final episodes depicting Tokuzo as the Emperor’s cook, until the painful American occupation, and the portrayal of his family as they struggle for survival and identity.

Historical perception of cooks in Japan + Modern times: How it relates to the drama

One would be shocked and surprised to learn that cooks at the turn of the century (early 1900) in Japan are regarded as lowly workers. That’s the perception given by the TV drama, and that some enter the kitchen with a ‘Yakuza background’.  [Tokuzo’s friend, Shintaro always faints to avoid work, and regards working in the kitchen as a springboard to other, more lucrative jobs]

It’s important to note that Japanese cuisine has evolved through many influences and laws. There was a time when cattle, horses, even dogs, monkeys, and chickens are prohibited, and anyone who breaks the rule was put to death. This prohibition has something to do with Buddhism as the main religion.

Rice was introduced when the Koreans have established a system in rice production and passed on by the Yayoi, a migrating tribe that settled in Japan. Chopsticks, soy and many other ingredients and tools from China were also adopted. Upon the decline of Chinese influence, the emphasis in the preparation and presentation of food changed from ceremonial to nutritional:

The cuisine of the samurai came distinctly from their peasant roots. The meals prepared emphasized simplicity while being substantial. The cuisine avoided refinement, ceremony, and luxury, and shed all further Chinese influence. One specific example is the change from wearing traditional Chinese garb to a distinct clothing style that combined the simple clothing of the common people. This style evolved into the kimono by the end of the Middle Ages. [Wiki] 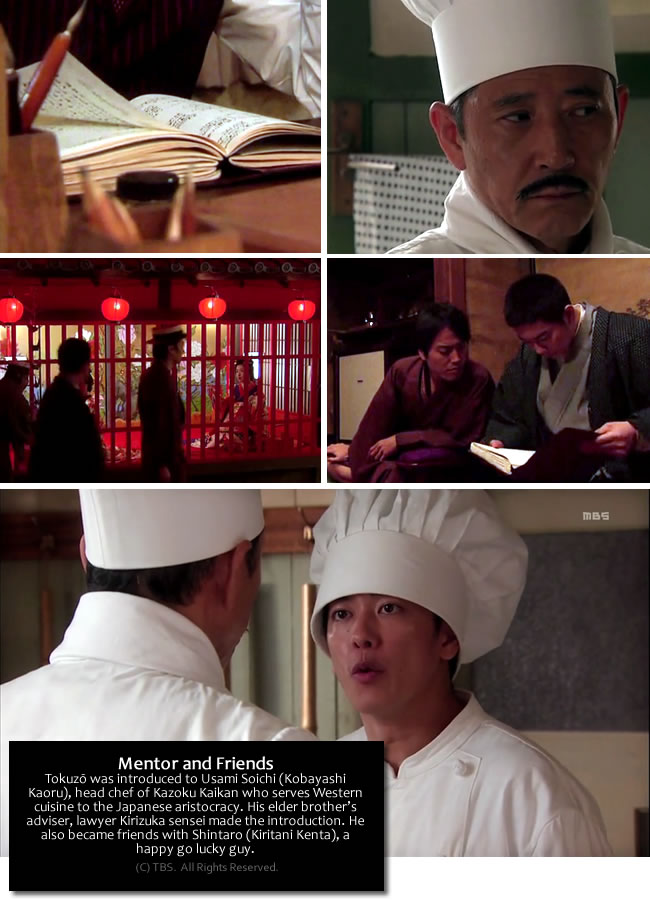 As to the reputation and status of cooks, not much has been said except for the hocho, or the Japanese cooking knife:

For Japanese cooks, the hocho, of Japanese kitchen kinfe, is the equivalent of the samurai’s sword. The hocho is so much a symbol of a cook that in Japan a cook is known as a ‘knife wielder’. Whereas all the pots, pans and other utensils in the kitchen of a Japanese restaurant belong to the establishment, the hocho is the private possession of the one who uses it. Wghen a cook moves from one restaurant to another he takes his own hocho with him. A chef gauges the skill of a new cook by examining his hocho top see where it was made and how it has been maintained. Just as the Japanese sword was engraved with the name of its maker, the handmade hocho (still a common sight) bears the name of the smith. And for an apprentice cook, the gift of a knife that has been used by the instructor amounts to a veritable treasure. Cooks of traditional Japanese cuisine are known today as itamae, which literally translates as ‘before the board’. [Page 206, History of Japanese Food by Ishige]

Note that Usami Soichi (Kobayashi Kaoru) presented his knife as a gift to Tokuzo on his way to Paris! Certain scenes were allotted to remind viewers that these cooking instruments are important, and a blunt knife must never be used in the kitchen for any reason. I guess, Ishige made sure the point is heard and read and understood across.

Says Inverse as to the modern times:

Surprisingly, Food Network’s website lists Iron Chef as having raised the status of Japanese cooks, who until then were poorly regarded in society. This seems surprising to read today considering Washoku (和食), or Japanese Cuisine, is revered in a way few other Asian cuisines are. Since 2011, Japan has overtaken France for having the most Michelin stars, a prestigious award given to the most exceptional restaurants. The Japanese have pride in their cuisine and its perception and status abroad. Why else would Iron Chef highlight its contest as a fight between Japanese cuisine and the rest of the world? Cooking networks have tried to imitate the success of Iron Chef by first introducing a domestic spin-off, Iron Chef America, before producing a few homegrown originals. [source]

Watching the original Iron Chef, with Chairman Kaga Takeshi (who plays a small role in A Tale of Samurai Cooking) is – for me – completes the cycle of my passion for Japanese shows. How could I know that I’d ended up watching Japanese movies and drama and writing reviews? And what better way to celebrate more than 5 years than to have a Food month? Anyway, searching for some articles on how cooks are perceived in Japan during those times have been difficult, may be because not much has been said about them? But then again, even those who are involved in the revered tea ceremony have movies too!

So here’s why this drama is the third reincarnation of the same tale about our famous head chef!

Let me end Part 1 by the below quote:

Cooking is in an honest profession where you cannot hide and let others do the work for you. You have to show up, work hard and prove you can do it faster and better. And find a mentor who will recognize your talent and push you in the right direction. [by Marcus Samuelsson]

How about you? Have you seen The Emperor’s Cook already? Let us know what you think!

In Part 2, we’ll focus on the acting and overall review of the drama. In Part 3, we’ll celebrate select moments from the drama itself and why it’s one of the best Japanese foodie drama that is also highly recommended by a lot of drama lovers!