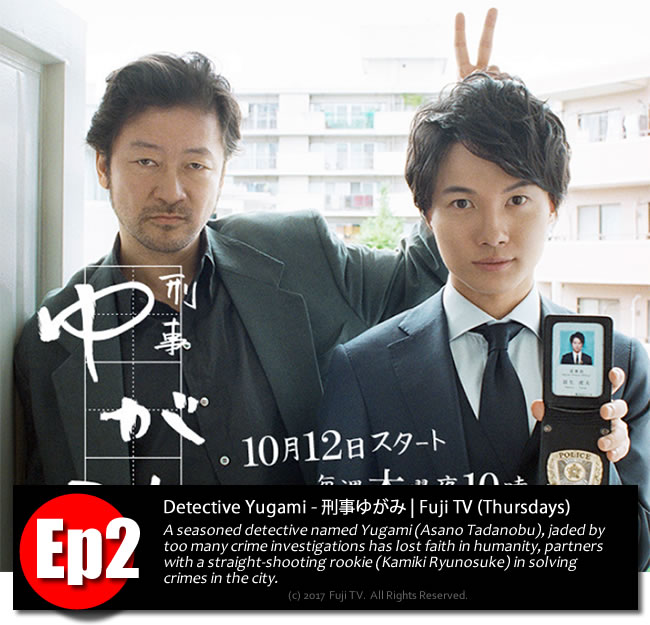 Episode Two of Detective Yugami 刑事ゆがみ is all about love and lies – in the most unexpected ways. It begins with Hanyu (Kamiki) teaching kids the value of telling the truth. As expected, Yugami (Asano) butts in arguing that lying is a practice one has to experience, and once a lie is told, there is a need for subsequent lies to propagate the manufactured ‘truth’.

And since I’m watching the drama in Viu, what better way than to use their Episode 2 description to start my review:

Yugami and Hanyu investigate an attempted sexual assault case. Despite hospitalization, the victim refuses to press charges or cooperate with the investigation. The mystery deepens when the scene does not correspond to the victim’s testimony. [watch Detective Yugami here]

We have a forty-ish teacher, Chisato (Mizuno Miki) hospitalized for a supposedly sexual assault. The perpetrator, Masaya (Nakagawa Taishi), joins her in the hospital and is now in a coma after accidentally banging his head on the victim’s table or so it seems. Chisato appears to be quite disturbed about the incident and refuses to cooperate with the police.

Apparently, they know each other – Masaya begins teaching in the same school. The twenty-something guy was also Chisato’s student a few years back…

Episode Review: This is even better than the initial episode –

I like it that Yugami treats Hanyu with respect – knowing full well that his younger partner has a lot to learn. Hanyu’s investigative methodology – sometimes – ignores common sense, which Yugami has many.

The big dog, small dog (master-apprentice) interaction between them make for a hearty entertainment.