I think it’s about time to make a recap post on Fall 2017 Japanese drama season. Let’s cut to the chase and go straight to the reviews, shall we? This is part 1 of my recap, with plenty more coming up, including interviews (and analyzing them).

Japanese historical drama, in any form, is always a welcome news for me. In Ashi Girl, Kuroshima Yuina takes the role of an unsuspecting girl who can do time travel (she did the same in The Girl Who Leapt Through Time). In her first time leap, she arrives in the Sengoku period and is destined to protect a young lord (Kentaro) in the battlefields.

Nakashima Yuki is also the director of Moribito (Season 2), while Iseda Masaya is one of the directors of NHK’s Hachidai Shogun Yoshimune back in 1995.

Time travel has very limited support in the scientific community but is quite popular in fiction. So when you’re used to special effects watching how the crew of the starship Enterprise leap through ‘time and space’, you will either get amused and laugh out loud or roll your eyes and become irritated with the time travel concept in Ashi Girl. Yui’s (Kuroshima) younger brother (Shimoda Shota) – inspired by the backyard (garage) adventures of HP, Amazon and Apple founders – use network cables and other computing ‘tools’ to construct a time travel machine. I’ve seen a lot of ridiculous set-up in Japanese drama, but this one tops it all.

Verdict: There are plenty of better Japanese drama you can engage yourself with, but this one is a ‘miss’. With plenty of over-the-top acting (bulging eyes, exaggerated movements, blah blah blah) and out of this world dialogue that makes no sense, Ashi Girl is not recommended. If you love Kuroshima and a blossoming romance with Kentaro is fine with you, then this might still work. 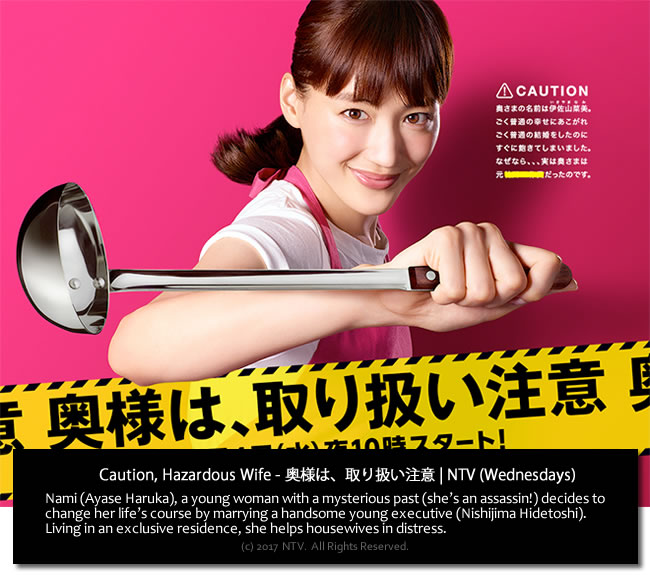 Japanese housewives, having fun and getting involved in a few dangerous adventures. Sounds good right? It does to a certain extent. But Caution, Hazardous Wife has limited appeal in terms of plot and substance. However, the casting of Ayase Haruka and Nishijima Hidetoshi as a couple is the clincher. Ayase has grown to become not only good in comedy but also in adventure-drama as well. Here she plays a former assassin who had a change of heart and decided that the peaceful, cozy life of a married woman is the right thing for her.

Things go smoothly, but her sense of justice cannot be contained (reality bites!). With the help of two other housewives (Hirosue Ryoko and Tsubasa Honda), they assist women in their neighborhood who may be in distress.

Verdict: The on-screen chemistry between actors is important, especially if you want engagement and this drama has plenty of those. However, my big concern is that will there be anything more than watching Ayase beat the bad guys (or gals) at the end of each episode? I’d love to see a bit more of Nishijima. Frankly, it would be a shame if he remains that ‘romantic’ lead without any substance. After watching 3 episodes, I find the entertainment factor extremely high. 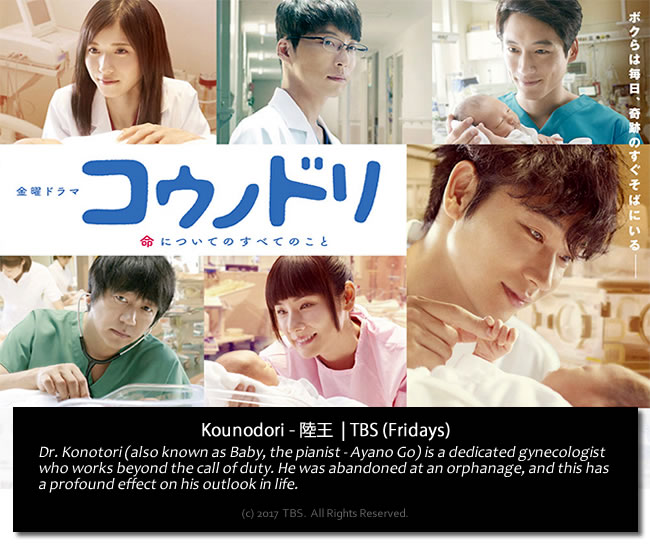 Watching the first episode of Kounodori Season 2 is like unleashing a flood of memories associated with the first season. Like holding a favorite book (and smelling the pages) or anticipating a favorite dish being cooked, or coming back to a place where you grow up as a child. Without these ‘sentimentalities’ any drama is not worth it at all.

Again, we get to see the pianist ‘Baby’ who is the alter-ego of Dr. Konotori (Ayano Go). ‘Baby’ represents his artistic side and a therapeutic way to take a respite from all the intensity and drama on the operating table. Aside from Dr. Konotori, there are other beloved characters we have to ‘revisit’ – Hoshino Gen’s Shinomiya and his matter-of-fact, detached personality, the romantic duo of Matsuoka and Sakaguchi, Yoshida Yo’s Rumiko and her ‘invasive’ ways.

Verdict: Watch this drama at all cost. There are other medical dramas this season, but unlike Daimon Michiko and her infinite pursuit to correct hospital administrators and their crooked ways, Kounodori offers a gentler yet ever encompassing look at doctors, hospitals, and healing – with a special interest in the mother and her child. After all, everyone has to be delivered to begin life in this world and we owe it to these doctors. 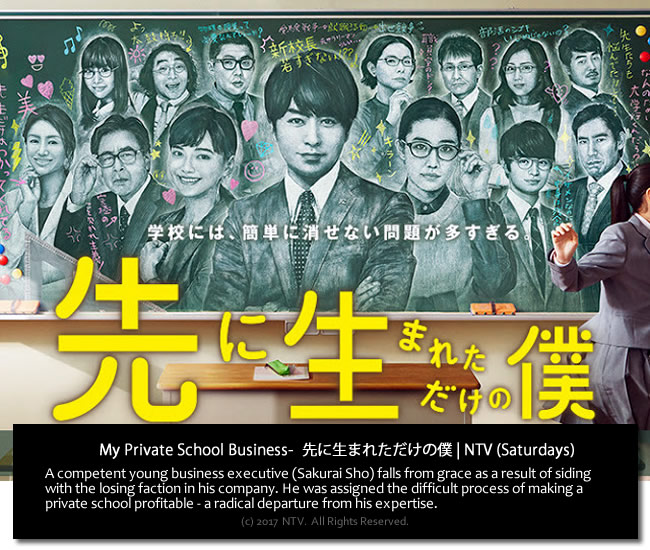 After the clouds of dust have settled between two factions in his business firm, Narumi Ryosuke (Sakurai Sho) lost together with his mentor. As punishment, he’s been assigned as a high school principal – in a completely different business environment, which he is not familiar with. The school is losing money and he is required to initiate a turnaround. As his first order of the day, he imposed cost-cutting measure. However, almost everyone in the school’s staff is in total opposition.

Unlike Family Game where Sakurai overdid the theatrics, what we can witness here in My Private School Business is a subdued, self-confident executive whose actions make sense. With plenty of credible supporting players, including Yu Aoi, Tabe Mikako, Seto Koji, and Morikawa Aoi.

Verdict: I like it when an actor challenges himself and dive into complex characters to prove that he has what it takes. In the case of Sakurai Sho, I was left with a bad first impression in Family Game. I think Kamiki Ryunosuke ate him alive in that 2013 drama. A big turnaround is evident here. After watching 2 episodes, I think Sakurai did a credible job. As a drama, it tackles some relevant school issues – involving both the staff and the students, and I continue to look forward to what it has to offer.