March Goes Out Like A Lamb is the final installment in the 2-part “San gatsu no Lion” live-action based on Umino Chica’s manga, directed by Ohtomo Keishi.

The movie centers on Kiriyama Rei (Kamiki Ryunosuke) a young shogi player who has risen through the ranks by sheer guts, determination, and some luck.

A loner who lives in a small, untidy apartment, Rei would have remained the same if not for a chance encounter with Akari (Kurashina Kana) who took care of him when he was dead drunk, sprawled on a street. This somewhat embarrassing incident becomes an opportunity as he gains the friendship of the young woman and her sisters, Hinata and Momo. From then on, he is often invited to dine at the family’s home, a few blocks away from his apartment.

I’ve been wondering about the title and its origin. Imagine my surprise when it was cited by a certain Thomas Fuller in his 1732 compendium. Further, an article explains:

… when March starts, it’s still winter, and by the end of the month spring has begun. [source] 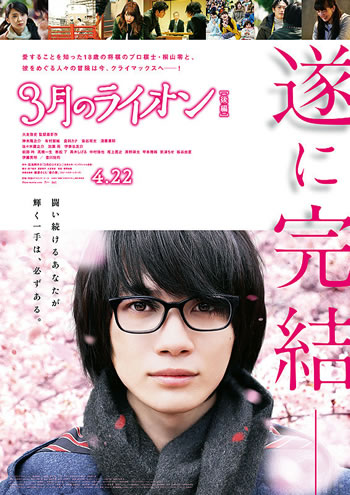 In the harsh cold of winter, Rei lives a life in a constant state of panic. There is only shogi – his salvation, his sense of meaning, his refuge – and he clings to it. He never actually ceased mourning the death of his family and it’s like a dark shadow that hovers over him.

But this ‘icy’ existence thaws by the warmth of the Kawamoto sisters’ generosity – where his relationship slowly evolves from mere friendship into ‘family’. Thus, it’s like spring, where life is in abundance.

One of the films’ strengths is the spotlight on Rei alone. In a 2014 interview, director Ohtomo Keishi explains:

In film, if you don’t keep it focused on the lead, the viewers won’t know who to empathize with and their attention will get scattered and they’ll lose interest. To tell a necessary story to an acceptable degree in a set amount of time, you end up cutting [scenes]. That’s unavoidable when you’re thinking about the nature of timed art like films. [source]

That awareness and that he studied screenwriting and film production in Hollywood gives Ohtomo a well-rounded directorial style that has succeeded in most of his films.

Following Ohtomo’s logic, certain scenes remain essential, without which there is no sense of connectivity amongst the characters – Hinata’s bullying, Goto Masamune’s wife, Soya’s intimidating nature and Kyoko’s personal struggles. Ohtomo also trims down the anime version’s ‘fat’ by limiting his interaction with Nikaido (Sometani) and put emphasis on his relationships with his foster father (Toyokawa Etsushi) and his teacher (Takahashi Issei).

Akari’s estranged father (Iseya Yosuke) and his return could have taken the spotlight away from Rei, but in fact, solidifies the final film even further. It gave meaning to Rei and the Kawamoto’s relationship.

In my opinion, Kamiki Ryunosuke’s journey as an actor started as Taro, the sickly kid who loves to play music in Little DJ. Melodramatic, or simply a ‘tearjerker’, it’s not as prestigious compared to Sometani’s Himizu or Yagira’s Nobody Knows. As Rei in March Goes Out Like A Lamb, his journey comes full circle. There are other Kamiki films – beloved and favored – but this 2-part film (at least for now) defines him as an actor.