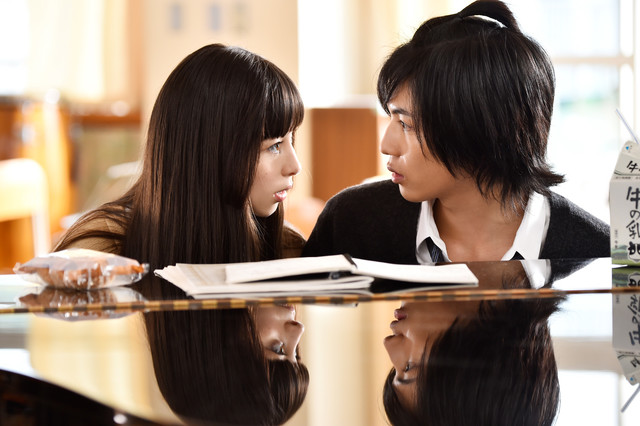 Anonymous Noise(Fukumenkei Noizu) is a teen romance with a musical twist. A girl struggles to realize her dream to sing and reconnect with her two young friends.

Under Shochiku, this young romantic drama is directed by Miki Koichiro (Evergreen Love) and stars Nakajo Ayami as the heroine. Shison Jun and Koseki Yuta play the two lead male characters. The movie was released on November 25, 2017.

What the movie is all about:

A new video of the film is released – less than 2 minutes – covers an introduction:

This movie will be a test and a challenge to Nakajo Ayami as she establishes herself as one of Japan’s upcoming actresses.

Winner of the “Miss Seventeen Grand Prix” in 2011, Nakajo has proven herself to be a competent actress. Among her excellent performances are Litchi Hikari Club, SetoUtsumi and the 2014 thriller Fatal Frame. She also went through extensive voice training to prepare for this role.

Co-star Koseki Yuta is already a promising actor with plenty of supporting roles on his acting resume. Shison Jun also made some notable roles of late. He reprises Matsumoto Jun in the latest version of Kimi wa Petto (Fuji TV, 2017).

Nothing extraordinary with the trailer but it delivers. At one point, I can’t recognize Koseki – I’m used to seeing him as a young student. Having those glasses made him look older. I hope Shison delivers with his role. For me, he’s the weakest link. I am personally biased towards Nakajo, she is gutsy and gorgeous! This is the kind of role that will allow her to grab opportunities in the future.

Since this movie is heavy on the music, it’s a good thing that Japanese rock band Man With a Mission takes over the soundtrack. The guys love to wear differently designed wolf masks during their concerts. I think their music videos can further propel the movie into box office success.