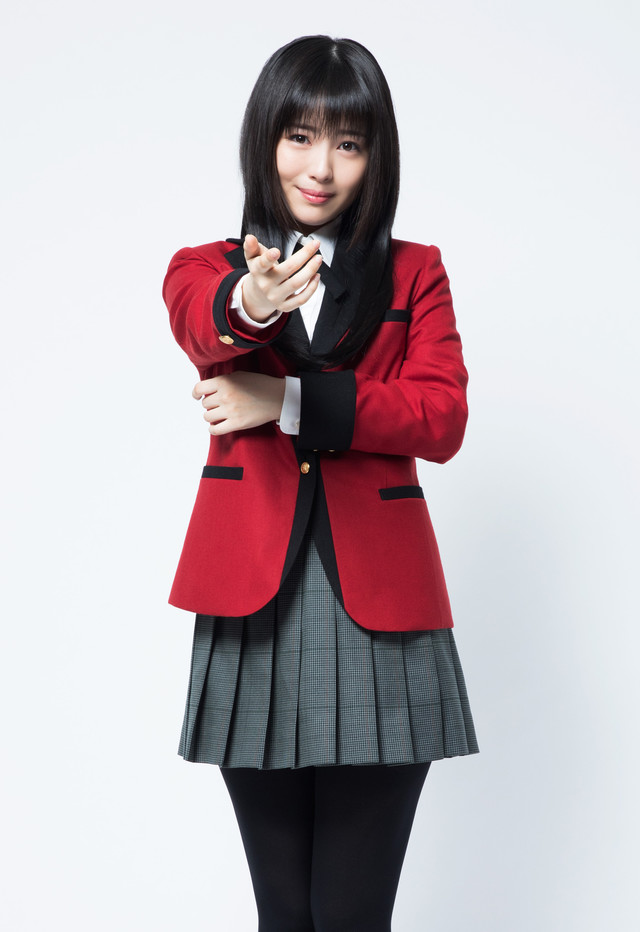 Fresh from her first starring role in I Want to Eat Your Pancreas, Hamabe Minami headlines new TV drama from TBS entitled Kakegurui.

Based on Kawamoto Homura’s manga, Kakegurui deals with gambling inside a prestigious school attended by the wealthy and the elite. They devised a way to promote class standing based on their own class system (master and slave). Says Hamabe on her role:

Yumeko is a unique character that I have not played previously so I feel anxious about my role. But I want to perform my best and prove that I have what it takes. I want the TV crew and cast to have confidence in me.

Yumeko is a newcomer to the school. Looking pretty and innocent, yet she has a gambling addiction which will eventually be known to all.

Takasugi Mahiro joins the cast as Suzui Ryota. He is not much into gambling and is academically competent. Ryota becomes a slave to a student named Mary (who is not yet cast as of this writing). His character becomes a close ally of Yumeko.

He eventually develops feelings for Yumeko being particularly attracted in the way she can overcome any situation and the contrast of her gambling insanity with her graceful mannerisms. Yumeko’s influence is awakening in him a greater thrill for gambling, and rising expectations out of her. In the anime’s final episode it is hinted that this attraction to Yumeko is creating in him a genuine gambling impulse. During this time he defies the setup prepared by Kirari Momobami in favour of gambling in his own terms, greatly exciting Yumeko. As he makes his move his eyes display an outburst of excitement very similar to that of Yumeko. [source]

The TV animation of the manga started July 2017.

Hamabe won the New Generation Award at the 7th Toho Cinderella Audition and is known for playing the heroine in Anohana: The Flower We Saw That Day, the ghost named Menma.

Takasugi Mahiro is one of our Generation NEXT actors, with an updated profile.

Actors' Bias Beyond the Frame Cross Talk Drama Features Food for Thought Generation NEXT Hitlist LA Movie News Roundup Next Break Novel On the Way Platform Reviews Thoughts and Things TV & Film Youngbloods
Privacy & Cookies: This site uses cookies. By continuing to use this website, you agree to their use.
To find out more, including how to control cookies, see here: Cookie Policy
wpDiscuz
1
0
Would love your thoughts, please comment.x
()
x
| Reply
Go to mobile version
Loading Comments...