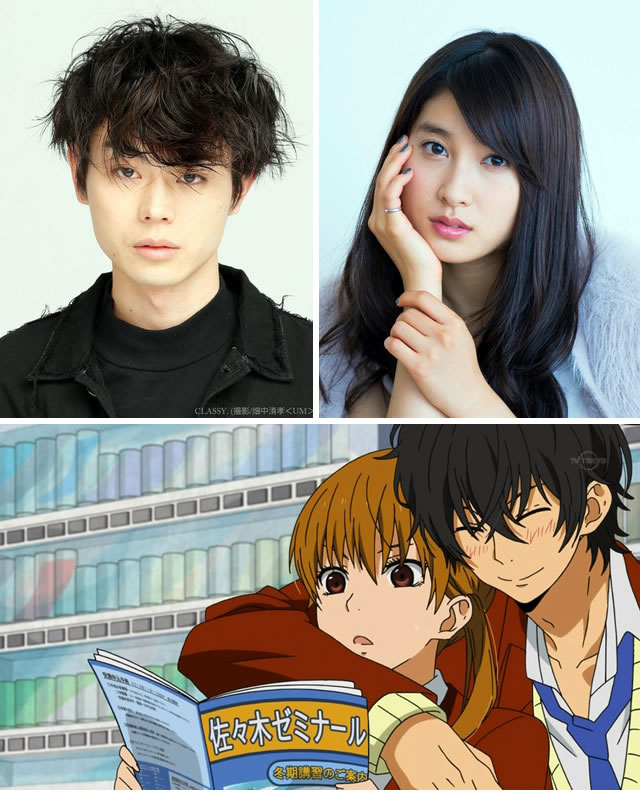 The romantic team up of Suda Masaki and Tsuchiya Tao is a surprising casting choice for My Little Monster (Tonari no Kaibutsu-kun).

I’m not surprised that the film partners for this LA chose Tsuchiya Tao. The big surprise is that we often watch Sudacchi play weird, dark, even disturbing characters. So, the transition can be fascinating. A role reversal for Tsuchiya appeals to me since I want Tao to play dark, even seductive types in the tradition of her Suzuki Sensei character. I also welcome Suda in Yamazaki Kento’s playing field that’s why this role would showcase a different Suddachi.

So what’s the story about?

My Little Monster focuses on the relationship between Shizuku Mizutani, who has absolutely no interests except in studying and her plans for the future, and a boy named Haru Yoshida, who sits next to Shizuku in class but rarely attends school. After Shizuku is tasked with delivering class printouts to Haru’s home, she meets Haru, who immediately greets her as a friend, starting their new relationship. Nicknamed “dry ice,” Shizuku is renowned as a girl who is emotionless and cold. However, when she met Haru she was touched by his innocence and his lack of knowledge towards human relationships. Though known as a violent and uncontrollable monster, Haru is actually kind and gentle. Haru immediately declares his love towards Shizuku, but it takes much longer for Shizuku to realize and accept her own feelings towards Haru. Together, as two previously unsocial beings, they help each other learn how to care for others and make friends. [Wiki]

A little monster with a heart of gold sounds like a character that Sudacchi can play with ease and confidence. His ability to dive into this role is no longer an issue since we all are aware of his acting competency. What I’m more interested in is the kind of on-screen chemistry that Suda and Tsuchiya will create.

Tsuchiya’s character is also not the type that would demand an actress to do lots of research. Even though I’m very fond of Tsuchiya, I wonder if Nikaido Fumi could play the role better? In this case, age does matter but what do I know about casting? Even Oguri Shun (Nobunaga Concerto), Ando Sakura and Tsumabuki Satoshi (For Love’s Sake), at their current age, are still given high school roles!

The manga was written by Robico and published starting in 2008 up until 2013, with an anime adaptation in 2012. The latter is praised by fans and reviewers for being “funny, cute and sweet”, which is to be expected for a quality Shoujo right?

Mizutani Shizuku is a high school girl who focuses all her time on academics so that she can have a future career with a 10 million yen annual income. She has been considered cold by many for her no-nonsense and blunt attitude and has no friends. After encountering Haru she starts expressing more of her emotions such as standing up to situations that seem wrong like when Haru had been used by his alleged friends for money. Although she is bothered by Haru and his antics, some of which are romantic gestures towards her, she develops feelings for him. She is proud of being number one in her class but after meeting Haru, whom she thought would be her academic rival, she no longer enjoys the thrill of topping that list. [source]

Yoshida Haru, the title character, has a reputation for being a troublemaker. Specifically for having been suspended from school after getting into a scuffle with schoolmates, and staying away from school even after the suspension was lifted. When he meets Shizuku, the first schoolmate to ever do something for him, he immediately considers her his first real friend and tries many things to be with her such as following her around at school and pulling her away from her routine life. He tells her that he likes her and might even be in love with her, which often flusters Shizuku. He has a spontaneous and carefree personality and often takes his frustrations out physically on other people. Academically he is very smart, having entered high school as the top-ranked student but skipping out on the entrance ceremony, and having studied most of the high school curriculum while he was sitting out a part of middle school. He has a rooster named Nagoya, later bringing and housing it in school (with the reluctant approval from his teacher). [read more]
I saw the Chinese movie Yesterday Once More and wonder how different Shizuku’s characterization will be compared to Guo Shutong’s Lin Tianjiao! Though I would expect no parents with controlling tendency will be featured in the Japanese LA since they just don’t often do things like that. Have you ever wonder why parental characters are most often ignored in Japanese manga and their LA adaptations?

Tsukikawa Sho, who helmed All ESPer Dayo! featuring Sometani Shota and the upcoming I Want to Eat your Pancreas will direct the LA which is slated for a 2018 release.

Why do LAs when there already is an anime? Now, there are talks about the “relevance” or even just the logic behind the production of live-action movies. Why would you want to watch a movie that is based on a manga and is already adapted into an anime? Isn’t an anime enough? some fans have been asking.

There is a logical explanation to that, and it was explained by Japan Times’ chief movie critic, Mark Schilling – On the new millennium and how Japan competes with Hollywood films:

… Another is the rise of franchises, usually based on a hit manga, novel or TV show, from which canny producers such as Fuji TV’s Chihiro Kameyama have generated income through a variety of media streams. The so-called production committee system they developed, in which a consortium of companies share the risks and rewards, has been criticized as destructive to creativity but has also proven effective at drawing audiences. [source]

As long as there is an audience, the film partners will continue producing live-action films, and I think it’s as simple as that. What we watch today is the result of decisions coming from businessmen and there is a long list of manga, books, and (light) novels awaiting an LA. In a sense, I am fine with that. As long as we get to watch the actors we like a lot. Of course, I often wonder whether I will be seeing the likes of Yagira Yuya, Sometani Shota, Yamazaki Kento and Suda Masaki, or Nikaido Fumi, Kadowaki Mugi, Matsuoka Mayu, Takahata Mitsuki and even Tsuchiya Tao, do something like last year’s Destruction Babies or perhaps another Himizu or Tomogui (The Backwater)?

Actors' Bias Beyond the Frame Cross Talk Drama Features Food for Thought Generation NEXT Hitlist LA Movie News Roundup Next Break Novel On the Way Platform Reviews Thoughts and Things TV & Film Youngbloods
Privacy & Cookies: This site uses cookies. By continuing to use this website, you agree to their use.
To find out more, including how to control cookies, see here: Cookie Policy
wpDiscuz
3
0
Would love your thoughts, please comment.x
()
x
| Reply
Go to mobile version
Loading Comments...
Comment
×