We’re more than halfway through October, with plenty of casting buzz including live-action adaptation for Mob Psycho 100, Flower’s Bloom (BL) and Poncho, the job-hunting movie Shukatsu. Updates on Hyouka and Matsuoka Mayu’s Tremble All You Want.

Shigeo Kageyama is an average middle school boy, nicknamed Mob (モブ Mobu) (means “background character”) for lacking a sense of presence. Although he looks like an inconspicuous person, he is, in fact, a powerful esper. As he grows older, Mob realizes that his psychic powers are strengthening and becoming more dangerous. To avoid his power getting out of control, he constantly lives a life under an emotional shackle. Mob wants to live a normal life just like the others, but a barrage of trouble keeps coming after him. With the suppressed emotions growing inside Mob little by little, his power threatens to break through its limits.

I’m especially excited about this development since the author behind this new LA is also the creator of One Punch Man, one of the biggest anime hit of 2015.

The author, collectively known as ONE, boasts of 100,000 hits/day on his website, accumulating 70 million visits as of the end of 2015.

Freshman Oreki Hotaro (Yamazaki Kento) applies for membership of the school’s Classics Lit. Club upon the prodding of his older sister and meets Chitanda Eru (Hirose Alice). Chitanda has a particular knack for mysteries and to Hotaro’s surprise, they began to collaborate as ‘investigators’ until they chance upon an ‘anthology’ published by the club 33 years ago. The said anthology occurred during a tumultuous time in Japan’s history and involved a relative who suffered tragic consequences as a result of a certain ‘school activity’.  [read more about our live-action coverage]

Hana wa Saku ka (Does the Flower Bloom – 花は咲くか) is the latest Japanese BL to have a live-action adaptation. To be distributed by Toei Video, the movie stars Watanabe Tsurugi and Amano Hironari as Yoichi and Sakurai respectively. 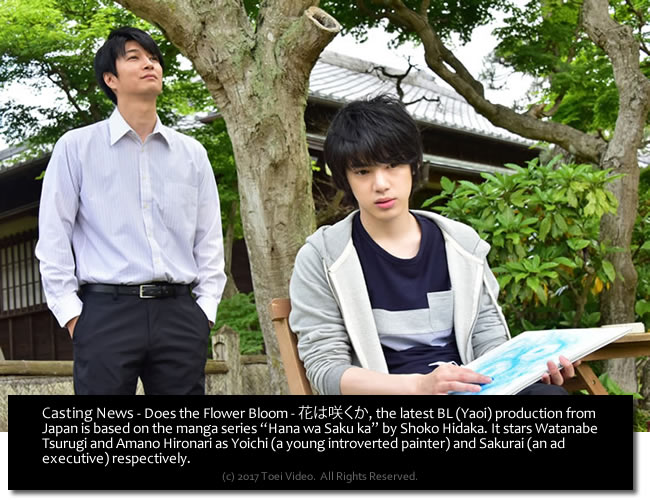 Based on the manga series “Hana wa Saku ka” by Hidaka Shoko, the premise goes something like this:

Sakurai, who works for an ad agency, bumped into a young man on his way home. He dropped some business materials and a magazine and messed them up. Luckily, the young man happened to have the same magazine and offered Sakurai to hand it over, so Sakurai followed him to his house. The young man, Minagawa Youichi, was a college student and owned a big old house, which was used as a boarding house. Sakurai thought Minagawa was unsociable and hard to go along with, but somehow he started to visit his house frequently and… [source]

A sequel to the job-hunting movie entitled Shukatsu is underway. Previously cast actors Watanabe Shu and Totani Kimito is joined by Someya Toshiyuki and Mizoguchi Takuya. They will take over from the original cast that includes Sakurada Dori, Tomoki Hirose, and Yokohama Ryusei. Here’s more:

Shuukatsu is a process that takes place during a university students’ final year in Japan where students look for a job before graduating. It is a physically and mentally tough challenge where students wear similar looking suits and attend job fairs, employment seminars, and job interviews with the objective of securing a job offer. It is a gauntlet thrown at students by tough interviewers. Hard enough. Imagine being amidst an army ofpeople all competing against you. [source]

Except for Someya, the three are Kamen Rider actors. Totani is associated with Kamen Rider-Decade, Mizoguchi is cast in Kamen Riden Den 0, and is also a participant of the Super-Handsome live concert. Watanabe Shu is part of the Attack on Titan LA, playing the fallen recruit of the scout regiment, Fukushi. He’s also a big part of the Kamen Rider 000 saga.

Based on the novel “Katte ni Furuetero” by Wataya Risa, the movie is about a loveless young woman (Matsuoka Mayu) who still harbors feelings for her middle school classmate named Ichi (Kitamura Takumi). Suddenly, a co-worker Ni (Watanabe Daichi) confesses his feelings for her.

As previously reported, Taiga headlines the coming of age film Poncho ni Yoake no Kaze Haramasete – ポンチョに夜明けの風はらませて from director Hiroharu Satoru. Nakamura Aoi, Yamato Yuma, and Sometani Shota are also part of the cast. A road trip/slice of life feature, the friends decided to take a ride and encounter people from different places. New photos to promote the film and movie stills are in the above gallery for your viewing pleasure!