September is an exciting month for Japanese drama and live-action adaptations! The current drama season is filled with gems – aside from Eita’s Hello Harinezumi, Takahata Mitsuki’s Overprotected Kahoko deserves all the spotlight for a refreshing take on the coming of age theme, with Takeuchi Ryoma leveling up his acting as well. While the big screen is gearing up for the live-action Hyouka, Yokohama Ryusei, and Yamada Yuki get new movie projects. We’ll also celebrate new photos from the upcoming Hibana movie starring Suda Masaki.

Hyouka (a.k.a. Frozen Desserts) is a school mystery drama with plenty of thrills but also features interesting intellectual discussions.

Freshman Oreki Hotaro (Yamazaki Kento) applies for membership of the school’s Classics Lit. Club upon the prodding of his older sister and meets Chitanda Eru (Hirose Alice). Chitanda has a particular knack for mysteries and to Hotaro’s surprise, they began to collaborate as ‘investigators’ until they chance upon an ‘anthology’ published by the club 33 years ago. The said anthology occurred during a tumultuous time in Japan’s history and involved a relative who suffered tragic consequences as a result of a certain ‘school activity’. [read more of our live-action coverage]

Hongo Kanata leads second episode in Square-Enix’ “Dragon Quest X” drama! Aside from the upcoming second seasons of Love Concierge and Akagi, Hongo joins agency-mate Yamazaki Kento and Hirose Alice in the Hyouka live-action, with a new trailer above. 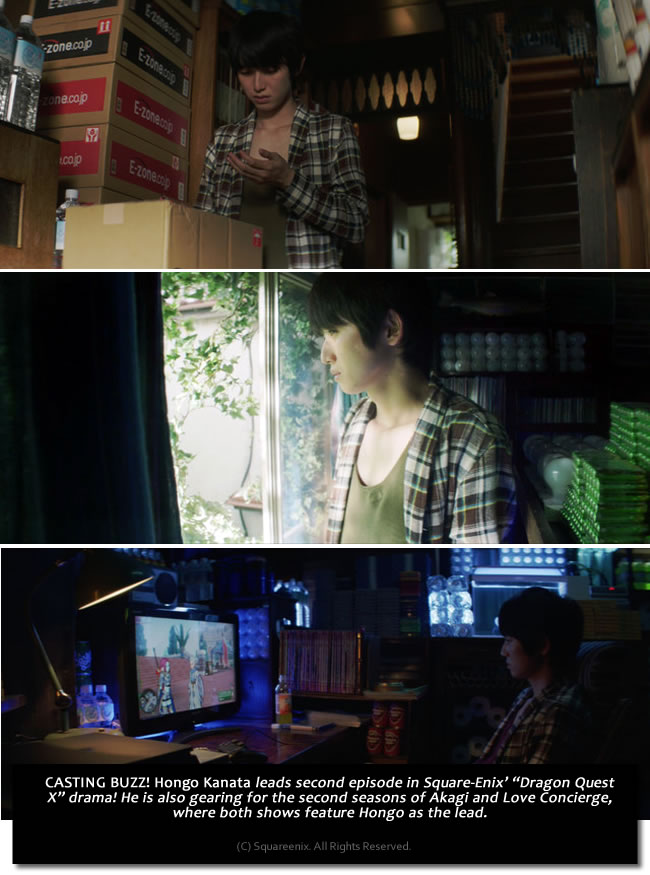 You can watch the whole episode below!

While I admire Takahata Mitsuki, some of her recent drama shows were not interesting enough to compel me to watch. However, Overprotected Kahoko – 過保護のカホコ – is an entirely different affair. In fact, I would consider it a television event worth celebrating! 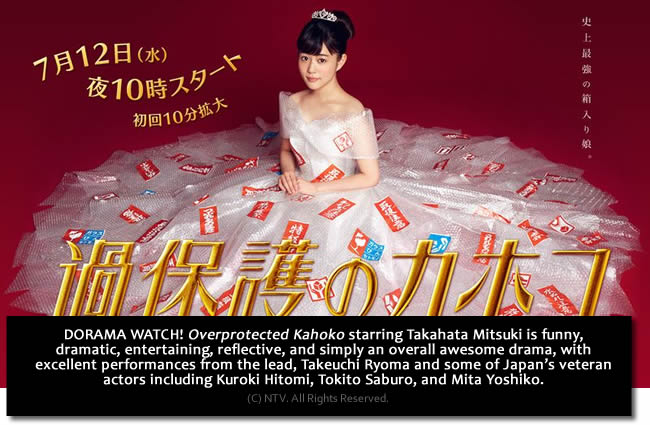 College student Kahoko is the quintessential overprotected child born out of today’s Japanese society. Shielded by her parents, Kahoko grew up completely pampered and became somewhat of a miraculously naive “test tube human.” She is 21 years old and about to start working for a company, but she has never slept away from home, had a part time job, chosen her own clothes, or even ridden a train alone. Kahoko has had her picture taken, but she has never taken a picture herself. Now, Kahoko is about to step out of her germ-free isolation pod and into the germ-infested world. It won’t be long until she realizes, “I’m different from everybody else!” She has been her mother’s best friend all her life and her father can’t live without her. As they become emotionally unstable from the changes that Kahoko goes through, their family begins to fall apart. That’s when Kahoko herself and the people around her begin to see the strength that hides deep within. — NTV

The chemistry between Takahata and Takeuchi Ryoma is undeniable. I am quite surprised that Ryoma can match Mitsuki. Words are not enough to describe them, you better watch it yourself! I’ll be surprised if you don’t find this drama interesting and fun!

Akagawara Modomu’s romantic comedy manga entitled Ani Tomo is having a live action adaptation! Starring Yokohama Ryusei as the romantic male lead, the story is about:

Nanase Mai, a polite, a little old-fashioned girl, got a boyfriend for the first time. Sota (Yokohama), a pure and kind guy, is a good friend of her brother, Yukihiro. However, both of them have no idea what they should do next… For Nanase, holding hand would be too embarrassing, and ‘date’ is something mature people would do. [source] 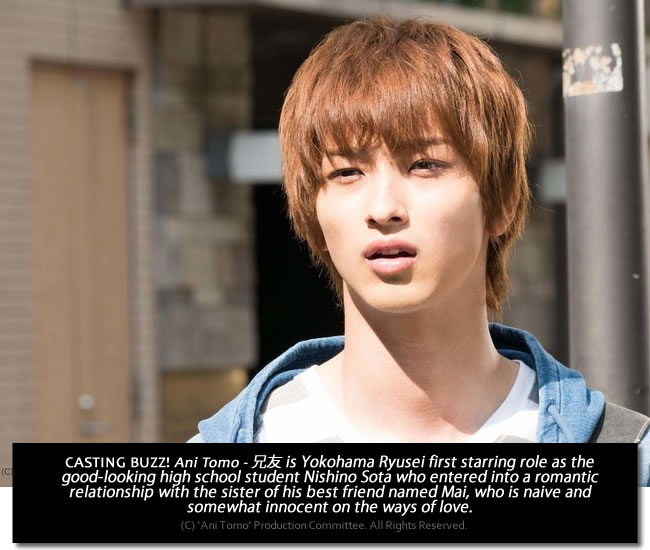 I have plenty of reservations regarding Yokohama as an actor. His performance in the TBS drama JK is a Snow Woman is barely watchable. He was also the weakest link in Kiseki: Sobito of That Day alongside Suda Masaki, Matsuzaka Tori, and newcomer Sugino Yosuke. I’d be surprised if he can come up with something credible. He was quoted as saying:

This is my first starring role in a movie so the pressure is big, but I will enjoy playing Nishino. Nishino is not the classic prince on the white horse like in most of shojo manga, because even though he is good-looking, he is clumsy with girls. The first love between Nishino and Mai and how they are distant sometimes makes the viewer feel embarrassed but I think it is also a story that will make people laugh a lot. I want to play it in a way that makes the viewers cheer for Mai and Nishino. I would be glad if this movie became something that people would look at and see how Nishino is working hard to be successful for the person he loves, and then those who don’t have faith in their love or aren’t good with love-related things will be able to take a tiny step forward. Of course, I would be happy if everybody watched it and could enjoy their heart skipping a beat. [source]

At least, he has the confidence to say that.

Yamada Yuki, fresh from the TV comedy Sannin no Papa reprises his role in the 6th and 7th installments of Yamikin Dogguzu (Stray Dogz) as a former Yakuza boss. With more than 20 full-length movies to his credit, including the upcoming 2-part movie Wilderness (with Suda Masaki), Yamada made waves in Itazura na Kiss (Furukawa Yuki) and is a consistent character and supporting actor.

I’m not sure if they can surpass the excellent performances of Hayashi Kento and Namioka Kazuki in the drama version produced by Netflix last year. The 10-episode TV drama features a struggling but promising comedian Tokunaga (Hayashi) who was mentored by a senior talent, Kamiya (Namioka). However, Kamiya falls into heavy debt and drinking while Tokunaga – after some successful stints – decided to stop doing comedy and accepts a ‘regular’ job. [read more]

Which among the casting news excites you the most? Let us know what you think!