Little Forest: Winter & Spring is the final installment of Igarashi Daisuke’s manga about a young woman named Ichiko, who left the big city to settle down in her small hometown up in the mountains.

The tale of this young woman as she adjusts to the different seasons while preparing her own dishes is a delightful viewing experience. The 2-part movie features postcard-perfect scenes of nature in the Japanese countryside.

While Part One – Summer and Autumn features a gentle working and living environment for the young re-settler, Part Two – Winter and Spring is more challenging – nature is harsher as the biting cold of winter requires some difficult adjustments in terms of planting, harvesting, storing and cooking dishes. 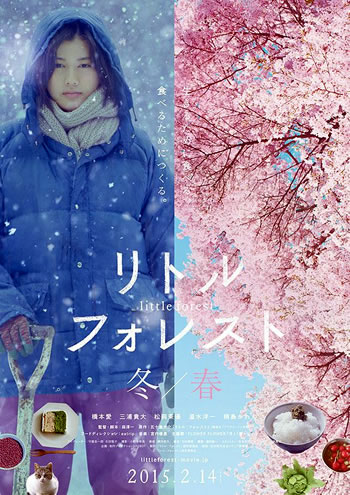 The first Little Forest movie concentrates on Ichiko, as an individual and her acquired taste and style of cooking. It also introduces Ichiko’s childhood friends and her relationships with them. In Part Two, we are reminded that Ichiko belongs to the ‘little forest’ community and that she has to follow certain rules and must contribute to a common goal. As is the case ‘no man is an island’, so it applies to her too.

Her relationship with her Mom was revealed via flashes of memories, and it was only by a letter that we learned that she’s somewhere ‘away’. Ichiko once described her as ‘selfish’ for not celebrating Christmas, but her mom opines they are not ‘Christians’ thus why should they? It was during that time that her mom baked the two-colored (spinach and red rice) Christmas cake.

There were some ‘hints’ that she might be interested in having a romantic relationship with Yuta (Miura Takahiro), her childhood friend and that she shares a rather volatile, yet loving relationship with Kikko (Matsuoka). In one of her conversation with Kikko, she revealed falling for a handsome co-worker, offering some of her homemade dishes but was later ignored by the said young man. These types of revelations made the movie surprisingly unpredictable and personal.

But the hanging question remains – is she settling down for good or is she just escaping from her issues in the big city?

Japanese cuisine is already popular around the world, but there lingers a certain mystery still. While it has been reported that Japan has overtaken France in terms of Michelin star honors, the way Japanese food are prepared and presented remains a fascinating subject for foodie lovers and moviegoers. There are so much to discover and learn and this 2-part movie invites us to explore a simplistic, generic approach to its cuisine.

One of the fascinating aspects of Little Forest is how the townsfolk talk about Komori’s origins – how ordinary folks uprooted trees to begin settling in the mountains, how they utilize horses and other animals to cultivate the lands, and how most of them work out a system in planting and harvesting crops during the seasons.

Ichiko finally realizes at the end that to be happy ‘at the bottom of her heart’ she must settle down for good and embrace Komori fully.