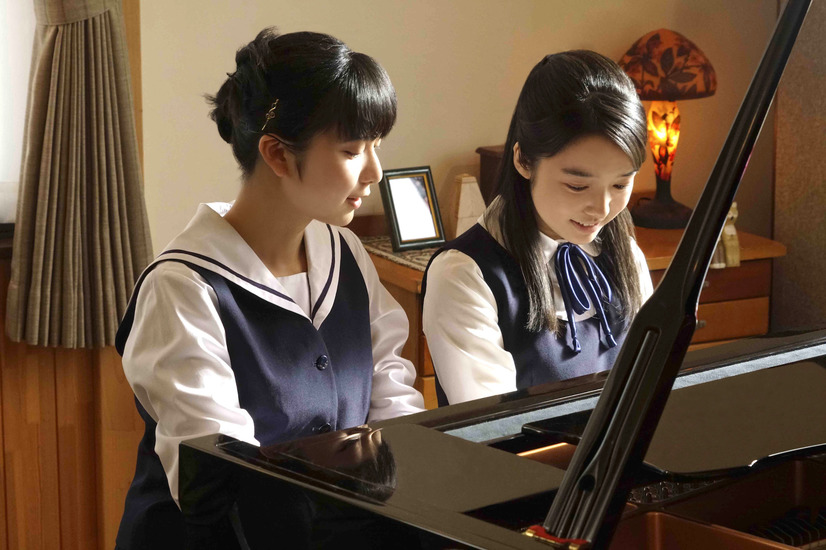 A Forest of Wool and Steel sounds like a mystery-suspense drama, yet it is about music and bonding. Yamazaki Kento will play a young student, Naoki, who became attached to a certain musical instrument.

He decides to work in a music store. The owner is the piano tuner who let him play in high school. There is something magical about the way the piano smells – like a forest, fresh and pure. Naoki becomes fascinated.

At the store, Soichiro (Miura Tomokazu) gives Naoki the chance to interact with people who love music. In time, he met the twin sisters Kazune and Yuni. Bonding and close friendship with the sisters and other people are tales for told.

The novel starts with a refrain that runs throughout Tomura’s story:

He could smell the forest, the way it smells in the fall when night is near. The trees are swaying in the wind, and the leaves are rustling. That smell of the forest as night is closing in…

But Tomura is not anywhere near a forest—he is standing in his high school gymnasium, watching a piano tuner, Soichiro Itadori, work on the school piano. Age 17, Tomura (whose name is written as 外村, the characters for “outside” and “village”) is from a mountain village whose school does not go beyond junior high, so he had to leave home to attend high school. Lacking much ambition, he is simply biding time until he can graduate.

Hearing Itadori as he worked on the piano changed all that. Itadori, perhaps bemused by the spellbound boy, tells him that this piano produces beautiful sound because it comes from the mountains and fields–sheep ate the grass on the mountains and in the meadows, producing the wool that was made into felt for the hammers. Itadori demonstrates the way the hammer, encased in felt, hits the steel strings, and again Tomura hears the sound of the forest in early autumn, just as the light dims. [read more]

Arguably, this is a departure from previous roles for Yamazaki Kento. Books from Japan provided a synopsis and it looks like the movie is worth anticipating for:

Narrator Tomura grew up in a tiny mountain village in a remote, depopulated region of Hokkaido. Since there was no local high school, he left home to attend a school in the city when he was 16. The following year a piano tuner named Itadori visits the school. Taken by the man’s bearing and skill, Tomura impulsively asks to be made his apprentice. Itadori advises him to finish high school and then attend a special piano tuner’s school on the main island of Honshu. At the age of 20, when Tomura has finished the two-year piano-tuning course, he returns to Hokkaido to work at Itadori’s musical instrument store. It’s a small operation with just ten employees, four of them piano tuners.

The main action of the story covers Tomura’s challenges and adventures over the next two years. Still relatively limited in his experience with music and the piano, Tomura gradually builds for himself an ideal of what it means to be a piano tuner through his interactions with the other tuners: Yanagi, a man seven years his senior who is assigned to be his mentor during his training; Akino, who graduated from a conservatory and worked as a professional pianist for a time but ultimately had to give it up; and Itadori, who has a number of world-class pianists for clients, and is able to persuade them to schedule concerts in Hokkaido.

Among Yanagi’s clients are the twin sisters Kazune and Yuni, still high-school age. A sudden illness makes Yuni unable to play the piano. In shock, Kazune also stops playing, but after a period of time she returns to the instrument, and Yuni determines to support her sister by becoming her piano tuner. The climax of the story comes when Kazune is to play for Yanagi’s wedding reception, and Tomura puts his heart and soul into tuning the piano she will use.[source]

The movie is tentatively slated for a December 2018 release.