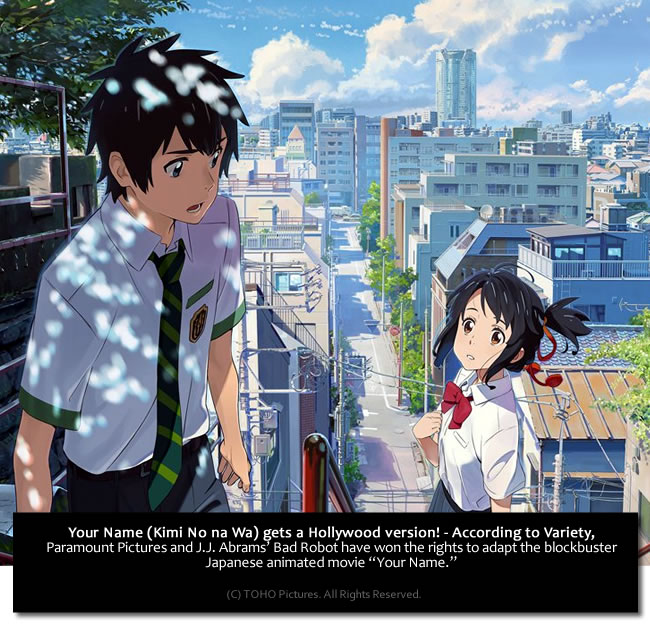 Variety film reporter Dave McNary reports that Hollywood is developing a version of Shinkai Makoto’s box office hit, Your Name (Kimi no na Wa) under Bad Robot and Paramount Pictures. The body swapping anime featuring two youngster Taki (voice acted by Kamiki Ryunosuke) and Mitsuha (Kamishiraishi Mone) who entered each others’ lives and eventually fell in love, was a big hit in Japan and around the globe.

The two companies announced Wednesday that they will work with Japan-based Toho Co., Ltd., the producers of the original animated film, to develop a live-action take on the story. Toho will handle distribution of the film in Japan. Abrams and Lindsey Weber will produce for Bad Robot, along with Genki Kawamura, producer of the original film. Eric Heisserer, who received an Academy Award nomination for his “Arrival” screenplay, will write the screenplay for “Your Name.” [source]

What separates this Hollywood adaptation from previous attempts – for instance, Netflix’s Death Note – is the people associated with the upcoming film.

The screenwriter, Eric Heisserer, has established a reputation for being ‘capable’ of handling works previously known to be unadaptable for the big screen. Of course, we are talking about the movie Arrival, which is adapted from the book written by Ted Chiang entitled “The Story of Your Life”.

The above Indiewire article may be enough assurance that the Hollywood live-action adaptation is going to be decent, and respectful of the original anime. Of course, that’s pure speculation on my part!

While the crew of the upcoming movie is well-regarded and respected, my worry at this point may be the cast. I can’t think of anyone (with the appropriate age range) who can play the young characters. Aaron Johnson and Logan Lerman may be too old, but perhaps they might consider Timothée Chalamet? Another excellent young actor is Tye Kayle Sheridan. Another option might be a huge audition…

Perhaps another major consideration would be the location. I mean, Your Name is based in Japan and features trains – and everyone knows how the Japanese value trains! Of course, there are also important landmarks in the film that are simply unique to the locale.

Toho partners with Paramount, Bad Robot for #YourName movie, it will

Kawamura Genki, one of Your Name producers, was quoted as saying:

“Mr. Abrams and his team have captivated audiences in their masterful reinvention of known properties. And Mitsuha and Taki have found a perfect narrator, Mr. Heisserer, to tell their sci-fi infused love story, which gave the film such drive. The meetings so far have been creatively stimulating with fantastic ideas that no doubt will make for a great movie. I am greatly honored to work with these incredible creators in bringing to audiences the Hollywood live-action version of ‘Your Name.’” [source]

Our PD community is already buzzing with plenty of commentaries, and among the many buzzes, the biggest concerns are:

For now, this news gave me enough reason to watch the anime once again!

How about you? What is your initial reaction to this news? Let us know what you think!