The biggest casting buzz at the end of September is the third installment of the Detective on the Bar franchise, and also the upcoming drama season that features a lot of young stars. Kinema Junpo continues to promote Suda Masaki, and his filmography remains solid. Spotlight on young actresses Sugisaki Hana, Shida Mirai, and Kawashima Umika for their new projects.

Let’s begin with the duo of Oizumi Yo and Matsuda Ryuhei as they celebrate the third installment of their critically acclaimed movie franchise, Detective on the Bar (Tantei Wa Bar ni Iru).

It was in 2011 when the first movie about a detective and his sidekick solving ‘unconventional’ cases was first launched. Oizumi Yo, who is known for playing historical and contemporary characters, made sure he’ll play a remarkable private detective (who actually has no name in the movie). Matsuda Ryuhei plays Oizumi’s driver and side-kick. He’s especially useful during brawls for possessing a strong physique, despite his looks.

Based on the novel “Ba ni Kakatte Kita Denwa” by Azuma Naomi, a second movie was released in 2013. While the first movie involves a mysterious woman who seeks revenge, this time, it was a talented magician (and a crossdresser) who plays the victim. He also happens to be the detective’s close friend. Aside from the chemistry between Oizumi and Matsuda, much of the credit for the success of the movies is due to filmmaker Hashimoto Hajime. Hashimoto is known for TV Asahi police drama/thriller Aibou which is now on its 16th season. However, Yoshida Teruyuki takes over from Hashimoto in this third installment.

The upcoming movie also stars Kitagawa Keiko and Maeda Atsuko. The new case involves a missing University student played by Maeda. The trailer includes some dramatic scenes featuring Kitagawa, who plays the owner of a modeling agency, and may hold the key to the missing girl’s whereabouts. 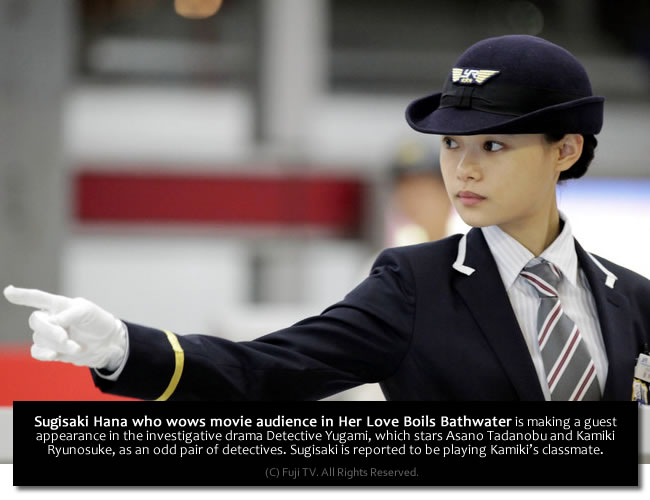 Her winning streak probably started in the 2013 TBS drama Yakou Kanransya but as the rebellious daughter of Kagawa Teruyuki in the MOZU drama series, she made sure people become more aware of her acting. One of her biggest roles is playing Mai in Pieta on the Toilet.  As the ‘sexually compromised’ high school student, her performance can only be described as brave and brutally honest, paving the way for more challenging characters.

I have yet to get confirmation whether Sugisaki’s role in Detective Yugami is only a guest appearance, but she is reported to be Kamiki’s classmate.

Recognized at a very young age, Shida Mirai won ‘Rookie of the Year’ at the Japan Academy Prize for the Oscar-nominated film, Nobody to Watch Over Me.  She also made plenty of drama series, including A Little Princess and Mother at Fourteen. Like Sugisaki, she has done a number of projects with Kamiki Ryunosuke, including voice acting together in Studio Ghibli’s Karigurashi no Arrietty. 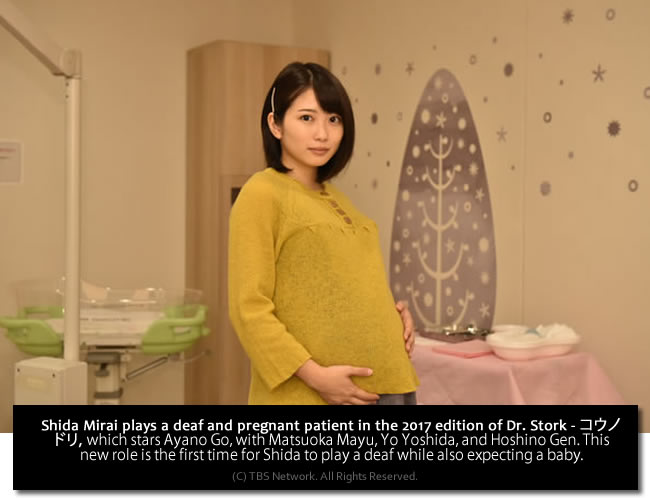 While Sugisaki stars with Kamiki in Detective Yugami, Mirai joins Ayano Go, Matsuoka Mayu, Hoshino Gen, and Sakaguchi Kentaro in the second season of Dr. Storks. She plays a hearing-impaired young woman who marries a man suffering from the same circumstances. Upon the news of her pregnancy, her family worries about the couple’s capacity to raise the child. More details about her role preparation from Dorama World:

In order to prepare for the role, Shida spoke to a woman who is hearing-impaired and had given birth before where she realized that the latter didn’t find that being deaf was a hindrance to her life. As such, Shida tried to avoid projecting the feel that being deaf was a negative thing to her character. With regard to her previous attempt at playing a mother, Shida recounted that she was only 13 when she took on her first leading role in a drama and had to play someone who had gone through something which she hadn’t experienced before. [source]

Shida is only a guest star of the drama, but the hype surrounding her role and the inherent challenges appear to pique the interest of dorama-watchers.

Suda Masaki foray into foreign collaboration begins with Wilderness – a 2-part movie which also stars South Korean actor/director/screenwriter Yang Ik-June. Based on the novel “Aa, Koya” by Shuji Terayama, the movies tackle a juvenile delinquent (Suda) and an extremely shy man who stutters due to lack of confidence and resolve. They become friends due to their shared passion for boxing. Aside from Wilderness, Suda is also making news for his Kamen Rider role, and for making the cover of Kinema Junpo.

#SudaMasaki joins a prestigious list of Japanese actors with Korean movie collaboration #YangIkJune for #Wilderness – the movie in 2 parts. pic.twitter.com/w4QHratopk

TV Tokyo is producing the drama version of Setoutsumi by Konomoto Kazuya, employing a younger cast in Takasugi Mahiro and Hayama Shono. The youth comedy about two students ‘killing time’ was first made into a live-action movie starring Suda Masaki and Ikematsu Sosuke. 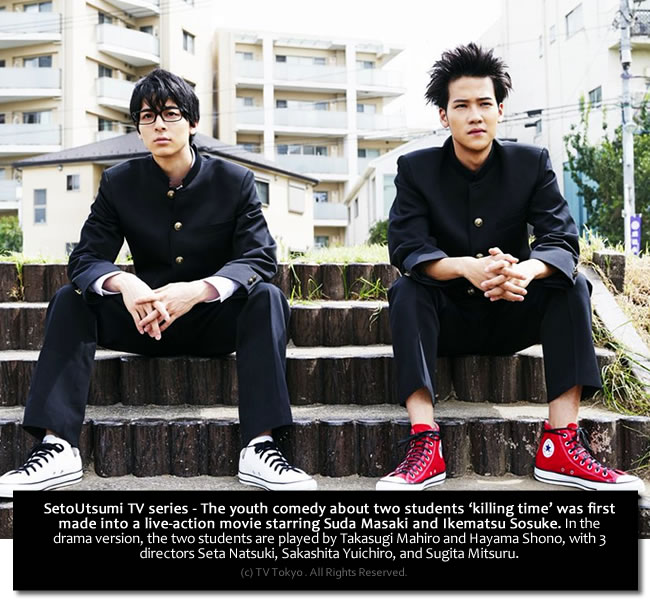 Utsumi So (Takasugi Mahiro) does not have many friends or any high school club activities. He would spend his free time before going to cram school idling at the riverside. One day, Seto Shokichi (Hayama Shono), who has too much time on his hands after dropping out of the soccer club, shows up. Despite being polar opposites in character, Utsumi and Seto find common ground on one point – killing time. And so, they would chat idly as they spend time together at the usual riverside after classes. [source]

Frankly, it would be hard to duplicate the performances of Suda Masaki and Iketamsu Sosuke for obvious reasons. We’re talking about two of Japan’s most accomplished young actors, but Takasugi Mahiro has already shown flashes of acting brilliance in a couple of projects himself. Hayama Shono was a big disappointment in Today’s Kira Kun where all he did was over-the-top acting vis-a-vis the movie’s lead, Nakagawa Taishi. Of course, it has something to do with the competency of the director…. 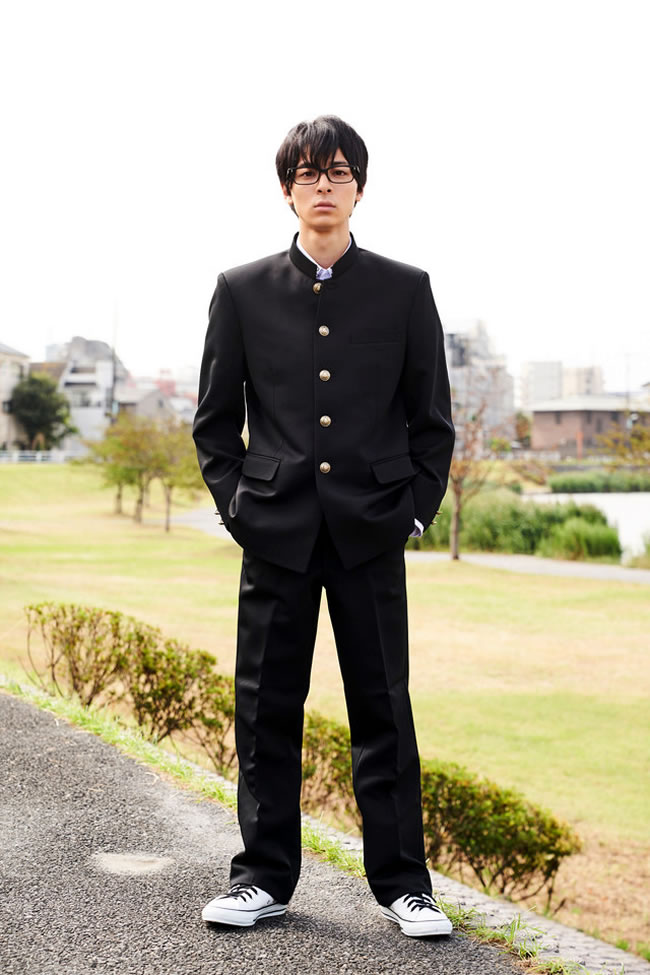 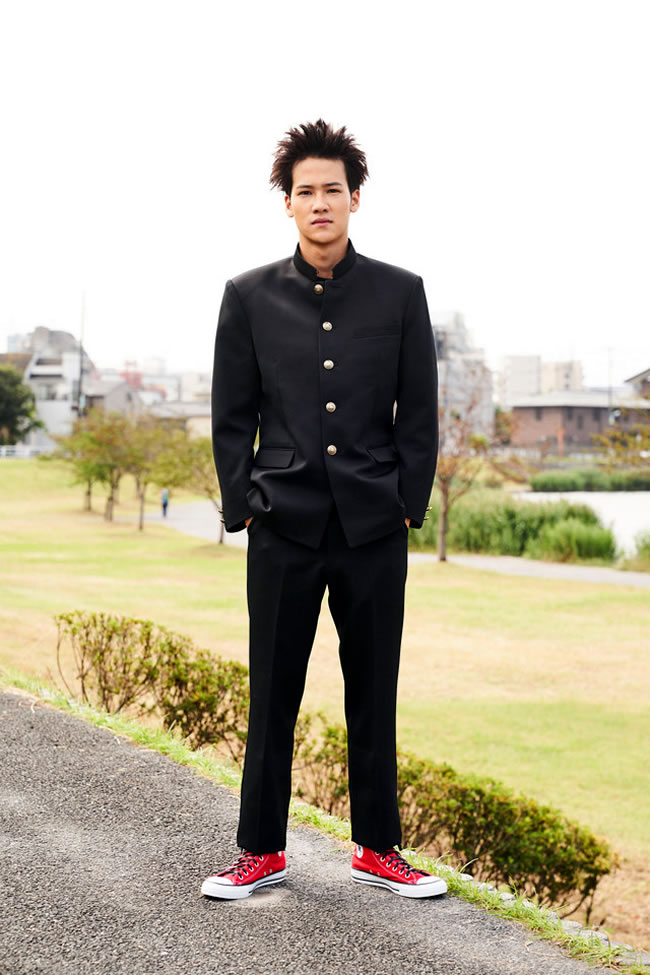 While both movie and TV series has the same screenwriter (Miyazaki Dai), they should have opted for Omori Tatsushi who has a solid record with films such as The Ravine of Goodbye, Tada’s Do It All House, and A Crowd of Three.

There are now only three months before we celebrate the new year! Please stay tuned for our Top 30 hottest young actors and actresses hitlist, coming up!