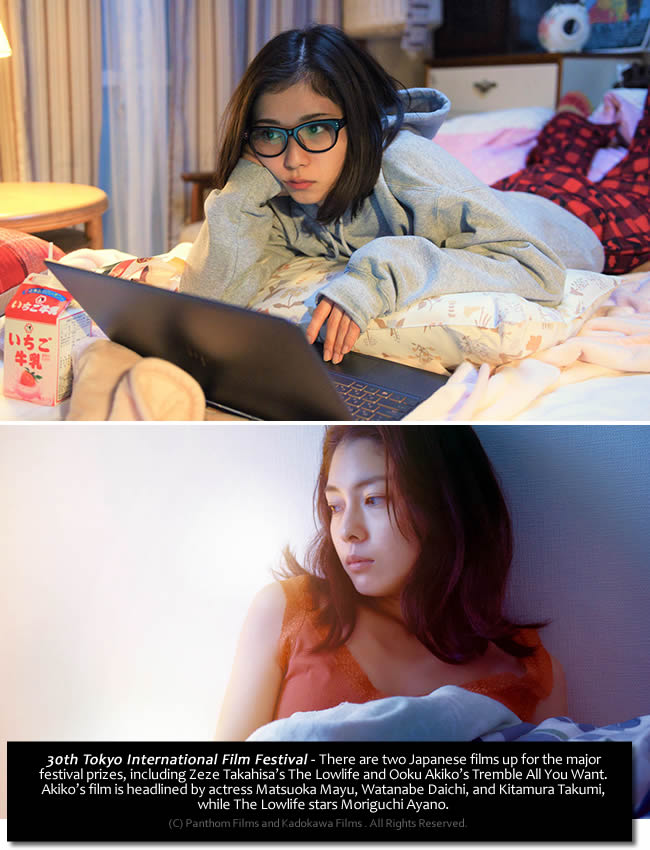 In the Competition section, 15 films were selected from among 1,538 titles from 88 countries and regions. There are two Japanese films up for the major festival prizes, including Zeze Takahisa’s The Lowlife and Ooku Akiko’s Tremble All You Want.

Katte Ni Furuetero (Tremble All You Want) stars Matsuoka Mayu, a young career woman who never had any romantic experience until now:

The Lowlife is the live-action adaptation of adult video actress Sakura Mana, “portraying strongly and subtly the struggle of women seeking their own ways of life.” Click here to go to the official competition page.

You can browse the other 13 films in competition at this TIFF dedicated page.

I’m not surprised to see the four actresses being representative of the best in Japanese cinema because they are precisely just that.

It is also quite revealing that they are the ones we featured at PD the most – while we inclined towards Mitsushima Hikari, Ando Sakura, and – of course – Aoi Yu, Miyazaki Aoi is also one of Japan’s accomplished actresses. Special mention should go to her movie with Satoh Takeru If Cats Disappeared From the World. [Read our review here]

Aoi Yu is remarkable in Over The Fence, her latest team up with Odagiri Joe.

Mitsushima Hikari stars in Traces of Sin (her latest acting collaboration with Villain co-star Tsumabuki Satoshi) and Life and Death on the Shore, this time with real-life partner Nagayama Kento. These two projects are her latest movies, after Kakekomi which was released in 2015.

Ando Sakura did a triple threat in what appears to be her dual golden years (2014-2015) with Asleep, 100 Yen Love, and 0.5 mm. Miss Ando is not ‘well-known’ in drama land by those living outside Japan since she concentrates on doing movies. She’s also part of Tsuioku, Toho’s thriller which also stars her husband Emoto Tasuku.

This year’s opening and closing films are Fullmetal Alchemist and An Inconvenient Sequel: Truth to Power. A Special screening for Legend of the Demon Cat (Kukai) will also take place. There are other Japanese movies to be screened which are worth anticipating, and here they are!

Fullmetal Alchemist is one of Yamada Ryosuke’s films pushing his ascent as Japan’s box office prince. The other movie is The Miracles of the Namiya General Store, which is getting plenty of raves from Japanese critics. As of this writing, the coming of age film is quite successful as far as ticket sales are concerned.

Notwithstanding the blond hair, I contend that Yamada Ryosuke resembles closely his character, Edward Elrich and it’s a casting scoop for the Hey! Say! JUMP standout. In a recent interview, he mentioned his height and that he’s not “that tall”, which actually serves as a casting advantage.

Edward Elrich is like a ball of fire – filled with limitless energy and with a unique sense of humor. The fact that he interacts with his brother, who has been turned from being a human into a different ‘form’ requires a lot of faith – in the sense that in the live action, he might be talking to an ‘invisible co-star’ where blue screens are supposed to put up the scenes. It’s hard enough to be a sensible, faithful Edward Elrich and to rely on CGI for most of the interaction… [read our first casting news for Fullmetal Alchemist]

With regards to Kukai and our personal bias actor Sometani Shota…

The Weibo movie page has written something fascinating. Thanks to our friend, the50-person for translation:

Huang Xuan as Bai Le Tian with a determined expression and furrowed brows. Kong Hai/Someya, wearing an expression that makes him seem as if he is smiling & not smiling at the same time yet with an aura of seriousness (and dignity) resting in his gaze. A poet and a monk, engaging in a [stealthy] tussle (of wits I assume?) in the shadows. Chun Qin (her name lit. means spring qin. qin as in the stringed instrument) played by Zhang Yu Qi – Charming and soft beauty, as if she [was one of those models who] sat in a painting. Qin Hao as Chen Yun Qiao- The scar on his face is striking, the husband and the wife seem to be hiding something.

Miko Girl is the latest film from Hard Romanticker director Su-Yeon Gu. The Japanese born director Su-Yeon Gu is a second generation Korean and his films reflect both countries’ culture. One of his earlier films is The Yakiniku Movie: Bulgogi, starring Matsuda Ryuhei, Yamada Yu, and Arata, which combines familial matters with a culinary competition.

Hirose Alice headlines Miko Girl as a shrine maiden who takes care of Kenta, a five-year-old boy. Yamaguchi Taiki plays the boy who got the part via audition. Her relationship with the boy and her father, who is the shrine priest (played by Franky Lily), will showcase her resolve as she grows up following religious tradition amidst the modernity around her.

Shashin Koshien is a coming of age story featuring young photographers who join the National High School Photography Championship Tournament. Every summer, the competition is held in Higashikawa-cho, Hokkaido. It began in 1994 and celebrates its 24th edition this year. Three individuals make up a team coming from 500 schools across the country, where only 18 schools are selected to enter the final competition.

Filmmaker Sugawara Hiroshi, UCLA educated in the Arts, is known for such films as Fireflies: River of Light, and Seven Days War. Both of his earlier films tackle youth and their interaction with nature, school and their families. Shashin Koshien is not entirely different since it also involves the youth. Kaira Shirahase, Shouma Kai, and Taira Yuna are some of the cast. [Casting details are here]

The other Japanese movies having special screenings, and world premieres are:

The Stand-In Thief [directed by Nishida Masafumi] – An ex-thief sneaks into a stately mansion where he falls victim to wild cases of mistaken identity. Will he be able to escape intact and return to the arms of his beloved?

Midnight Bus [directed by Takeshita Masao] – This is a film adaptation of Yuki Ibuki’s novel, which was nominated for the 151st Naoki Prize. It sensitively depicts the moving story of a family struggling to find their way to begin again.

Ryuichi Sakamoto: CODA [direted by Stephen Nomura Schible] – A portrait of Oscar winner Ryuichi Sakamoto, from pop icon of Japan’s technological aspirations to leading activist post-Fukushima, through battling cancer to his return to music for a major new opus.