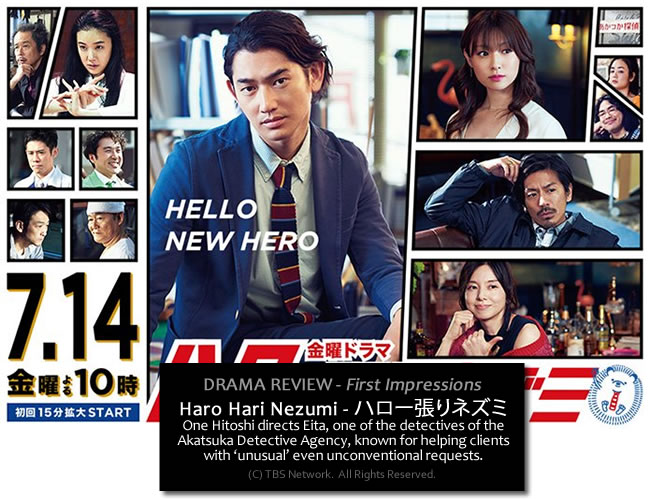 After skipping a significant number of drama seasons, I had an inclination (perhaps even an itchiness) to review a drama series. TBS’s Haro Hari Nezumi –  ハロー張りネズミ is my perfect candidate, and I have some very compelling reasons why I am writing a review:

1. One Hitoshi of Bakuman, Moteki, and Scoop! fame is directing the series;

2. Eita headlines the cast, with a guest (correction: a mainstay) appearance from Aoi Yu. Kamikaze Girls’ Fukada Kyoko is also one of the mainstays, so who can resist two fabulous actresses in one drama?

3. Reminiscent of such shows as Mahoro Eki Mae Bangaichi (Eita with Matsuda Ryuhei) and Rivers Edge Okawabata Detective Agency (Odagiri Joe), this is another opportunity to be in awe at a quality Japanese slice-of-life, detective thriller/drama series.

Eita did a short voice-over to convince Tv viewers not to switch channels. I don’t know why but it sets the tone for me. You see, Episode One is especially emotional and dramatic, and a few doses of comedy is needed. Heck, director One certainly aims for a satisfying viewer experience, as in the case of his full-length films. My initial impression is to look forward to the next few episodes, knowing that there will be plenty of surprises, perhaps in the same vein as Mahoro or Rivers Edge or maybe not?

Akatsuka Detective Agency stands inconspicuously at Shimo Akatsuka in Tokyo’s Itabashi ward. It is unlike any other detective agency where its officers and detectives are in formal suits. Instead, the agency is composed of a female boss – Kaoru, played by Yamaguchi Tomoko and two staff (investigators) – Goro (Eita) and Kyusaku (Morita Go). During downtime, Goro and Kyusaku are at the bar Kirara directly below their office, flirting with the part-time staff Moemi, like they always do every day.” But if there’s a case, the duo change gear and would do even the impossible to solve the case requested by their clients.

A young man named Kawada appears before our detectives with an unusual (and most certainly, an almost impossible) request. His wife and daughter were involved in a car accident, rendering his wife in a coma, and his daughter dead. In recent week, the wife appears to have recovered but instead of telling her the sad news, Kawada lied, informing his wife that their young girl is doing fine and practicing ballet. However, a few weeks later, her condition became critical and requests to see their child.

Kawada is asking the detectives to search for a girl that looks like his dead daughter. She is then to appear in front of his dying wife.

To search for lookalikes, they held auditions. But unlike Miike Takashi’s movie of the same name, all the girls are utter failures. At a park, while planning for their next move, they saw the perfect candidate.

During downtime, our sewer rats are goofy, hyperactive even and like to ogle at women. The karaoke bar nearby serves its purpose – Moemi, looking pretty and petite makes all the right moves! When there’s a case, our duo shift gears, ready for action.

Morita Go, a member of J-pop group V, acts surprisingly well, and while I have yet to determine who is more serious (and less fun?) between Eita’s Goro and Morita’s Kyusaku, we have a ‘formidable’ team here. At 5’10”, Eita towers over Morita, unlike the Mahoro team where Matsuda Ryuhei is even taller than Eita.

To put some perspective, jadefrost wrote definitive characteristics of the duo:

Nicknamed Harinezumi (hedgehog), Goro (Eita) is a fool and is lewd. But he is compassionate and has outstanding ability to sniff out cases and get into action. Although he is a little bit thick in the head, he is a great fighter and the life of the detective agency. [source]

usually cheerful and also enthusiastic. He and Goro always call each other idiots. Contrary to his macho looks, he is easily moved to tears and there are times when he cries aloud after listening to clients’ stories. [source]

Sounds just right for me!