It’s been a while since we’ve launched a singular article about Kamiki Ryunosuke (神木隆之介). I practically grew up with my Japanese movie viewing experience filled with Kamiki’s ‘prodigal’ acting – Little DJ, Into the Far Away Sky, The Kirishima Thing, Bakuman, the Kenshin and San gatsu no Lion films to name just a few.

It seems fitting to have some updates since PD is coming up with the Top 30 Japanese actors hitlist in a few days.

Kamiki – together with Amuse agency-mates Nomura Shuhei and Yoshizawa Ryo – were identified recently by Nikkei in their index of young actors (23-25 yo) who are being groomed (essentially singled out among their age group) for more projects (movies, drama, shows). They are to be in ‘direct’ competition with KEN-On’s Fukushi Sota, Topcoat’s Suda Masaki, Humanite’s Okayama Amane, Tristone’s Mamiya Shotaro, Horipro’s Takeuchi Ryoma, and Johnny’s Nakajima Yuto and Yamada Ryosuke.

I find the age pairing to be odd since it has little bearing on their actual career exposure. Kamiki is way ahead of most of the names, except for the Johnny’s who are practically in the spotlight for most of their young adult lives and Suda Masaki. Like Yagira Yuya, Suda Masaki is an ‘anomaly’. He is hard to classify – not that he’s incapable – in fact, he’s hard to define. Sudacchi has done practically everything. Recently, it was reported that Masaki mentioned his admiration for Kamiki – will an acting showdown loom on the horizon?

My favorite Kamiki Ryunosuke movie role (most recent) is…

Note how voters still pick Soujiro even though the Kenshin trilogy is more about Satoh Takeru’s character. However, aside from the fight scenes between them, Kamiki’s screentime offers enough to satisfy fans. Contrast to Kiriyama Rei’s role delineation – the darker, moody character – got less votes. How this will change may be up for some time.

If there is ever going to be a head-to-head battle, he should be paired with Stardust’s Hongo Kanata (27), Suga Kenta (24), and Sometani Shota (25). Of course, that’s wishful thinking on my part, but just imagine the sparks when there are acting showdowns between them?

Kamiki’s San gatsu no Lion performances, for me, defines him right now. While it may not be ‘perfect’ acting, his take on the Kiriyama Rei character is spot on down to the shogi game style. I had a wonderful discussion with a friend on Twitter, expanding on Kamiki’s Kiriyama Rei performance. The gist of it all is that Kamiki – having been raised by a well-loving family – finds it hard to express anger as an emotion since it might appear to be alien to him.

Catching up with the current Detective Yugami TV detective series is made even more fun with the appearance of well-known guests such as Odagiri Joe (who had a movie with Asano Tadanobu in Kurosawa’s 2003 crime-drama Bright Future), and Arata Mackenyu (Kamiki’s co-star in Jojo’s Bizarre Adventure). 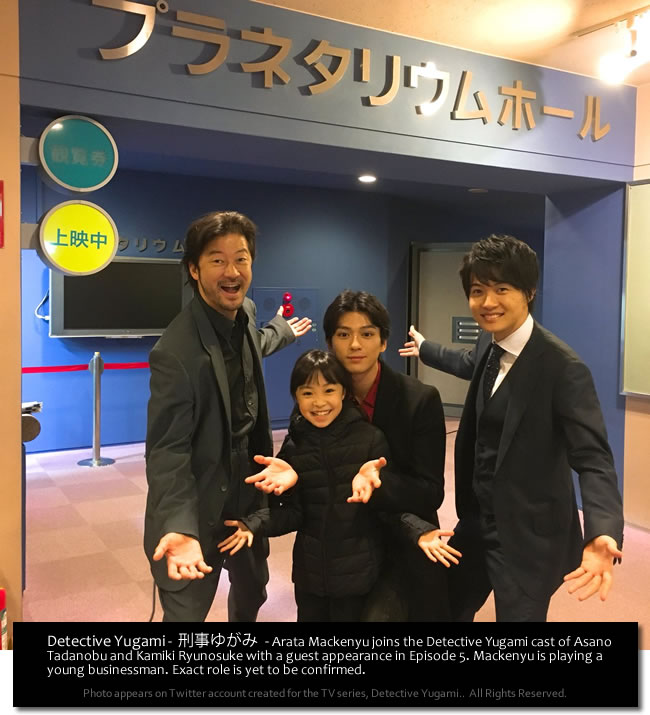 Mackenyu’s Instagram account posted a short clip with Kamiki, thus confirming the guesting a few days ago. Note the video views running at 3.2 million. [Below tweet captures the clip from Instagram, where it’s not so easy to embed]

What’s in a name? I often wonder what’s ‘Ryunosuke’ means since as an actor Kamiki Ryunosuke appears to be ahead of his time. From Japanese 竜, 龍 (ryuu) meaning “dragon” or 隆 (ryuu) meaning “noble, prosperous” combined with 之 (no), a possessive marker, and 介 (suke) meaning “forerunner, herald”. 神木(Kamiki) = Sacred tree And Trees of God.
On a lighter note, Kamiki joins Shinkai Makoto at the Tokyo National Museum for the animator’s exhibition. Kamiki, together with Kamishiraishi Mone lend voices to Shinkai’s animated characters Taki and Mitsuha, respectively in Kimi No Na Wa (Your Name.) The animation is now the biggest grossing anime of all time with more than $300 million.