So we at Psycho-Drama have always wanted to do a crosstalk and finally, we got the chance to do so!

The first episode of Ani ni Ai Saresugite Komattemasu (NTV, 2017) is the focus of our first crosstalk, which stars Tsuchiya Tao as Tachibana Setoka, the younger sister to GENERATIONS’ Katayose Ryota’s Tachibana Haruka.


This was a five-episode prequel drama in anticipation of the release of the 2017 film of the same title. The story revolves around Setoka, who has confessed to 12 high school boys and been rejected each time, and Haruka, who hides the secret that they are not siblings related by blood.

the50person: The Chinese had a great time laughing at all the cliches and tropes in the Tsuchiya Tao drama. Don’t waste time on that, though if you’re feeling nostalgic for early 00s romcom you might want to try? You either cringe or laugh your head off. At least according to reports.

Kaye: If you mean the one with Chiba, I’m just going to check to see whether Ryota got better because I know I won’t be able to take it seriously.

Kaye: I just got the first episode of that pre-movie drama for that other Chiba romance movie. Not sure I’ll live through it…

50: Have fun, I might check that out too for the main guy. Curious about his acting.

KLoulliet: He seems decent from what I saw.

50: The story is practically brainless and shallow.

KLoulliet: Yep, most if not all of the mangaka’s characters are the same.

50: Sigh…I read her stuff and it was bleghhhhh.

50: Either he dies or the plot makes him die. 🙂 Also, I mean die in a figurative sense and I was referring to the acting. Either he flops in the acting department or the plot is so unsalvageable he can’t rescue it and it ends up making him appear as if he is a bad actor when he may not be one.

Kaye: True though. I don’t think it’ll be all too great overall to begin with. Put three people together who are often awkward and the chance they’ll pull each other out is very small.

KLoulliet: None of them are capable of doing that tbh.

50: Nope. Surprisingly I think Tao might work better with Kame.1
He sets ppl at ease somehow.

50: Takeru could work though. But they have a project together too right?

KLoulliet: Yes yes, that what I meant. I want to see how that will turn out.

50: If he can handle Takei Emi, I think Tao wouldn’t be too hard?

Kaye: Someone with a bit more solid experience on them at least.

Kaye: That’s what I thought [that none of them are capable]. Put them in solid casts and I can get through them, but all put together is a little…

50: Would like to say recipe for disaster, but I’ll shut up before watching xD I hope Ryota isn’t too cringey. Tao…not hoping too much?

Kaye: All I know is that Ryota will have to do some convincing acting to get me to approve of him :p

KLoulliet: Yes, true. it’s hard to convince when it’s a silly drama/movie like this

50: If people can’t take the plot seriously, what makes them think they will have the patience to do so for the acting? 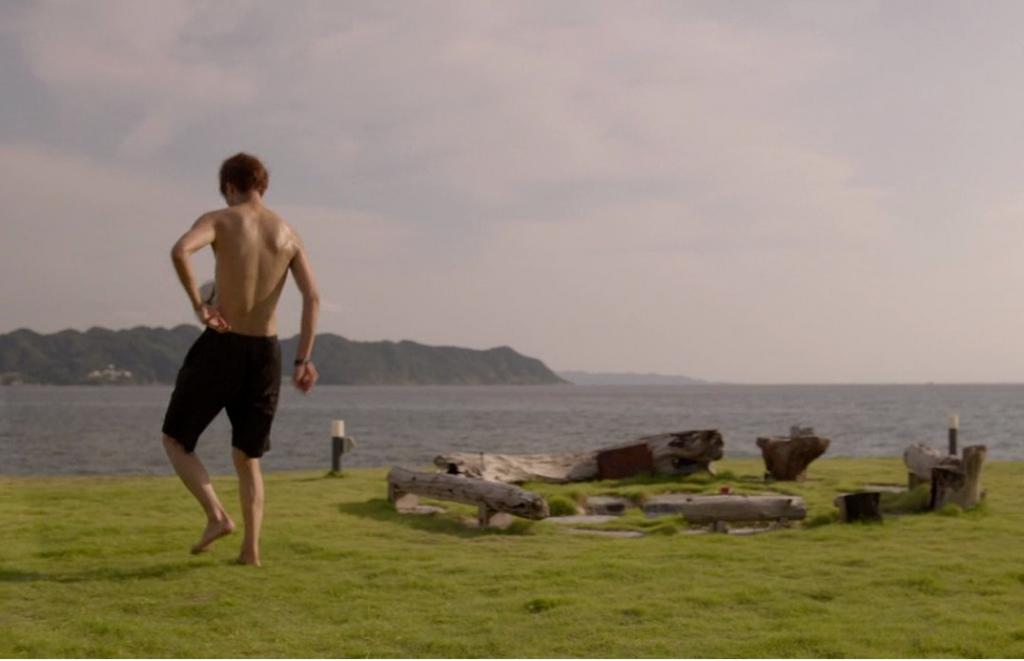 KLoulliet: Hahahaha! Well, they know how to exploit whatever they have.

Kaye: He is an EXILE TRIBE3 kid after all. They all got the bodies to show off. (as is almost a standard for anything they’re in anyway)

Kaye: Very much so. I mean… 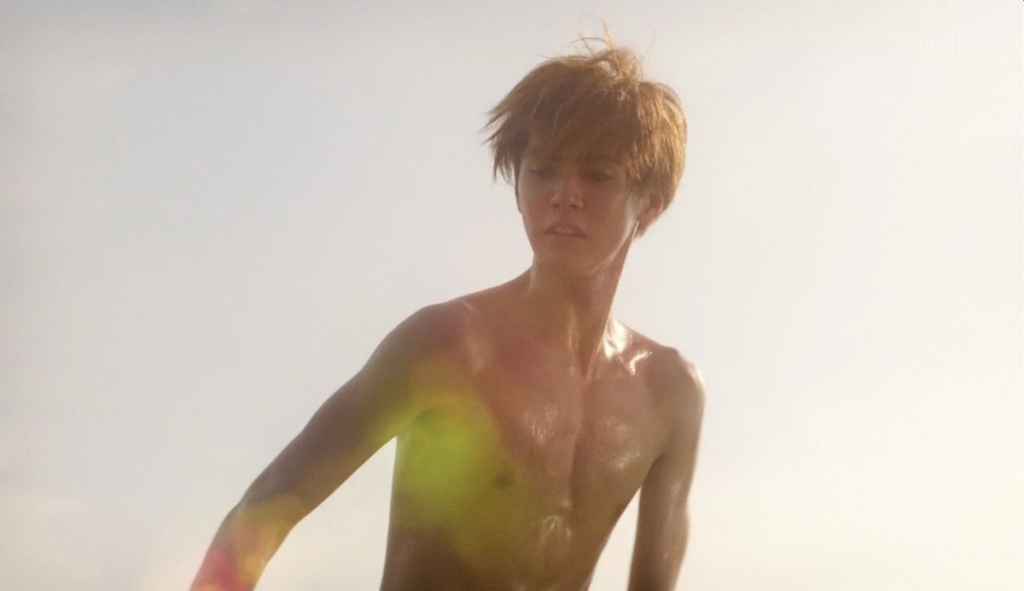 50: It’s just her subconscious self knowing that it’s not her true brother 🙂 #logic

Kaye: I’m actually a little impressed by Ryota so far. He’s being more natural than Tao? Well, impressed isn’t the right word but considering I absolutely didn’t expect a thing.

KLoulliet: Yeah, I was surprised too. He is not half-bad.

Kaye: That difference between him at home and him at school though.

Kaye: It’s just made me laugh so far. Need to see more before I say anything. But he’s doing a good job so far! 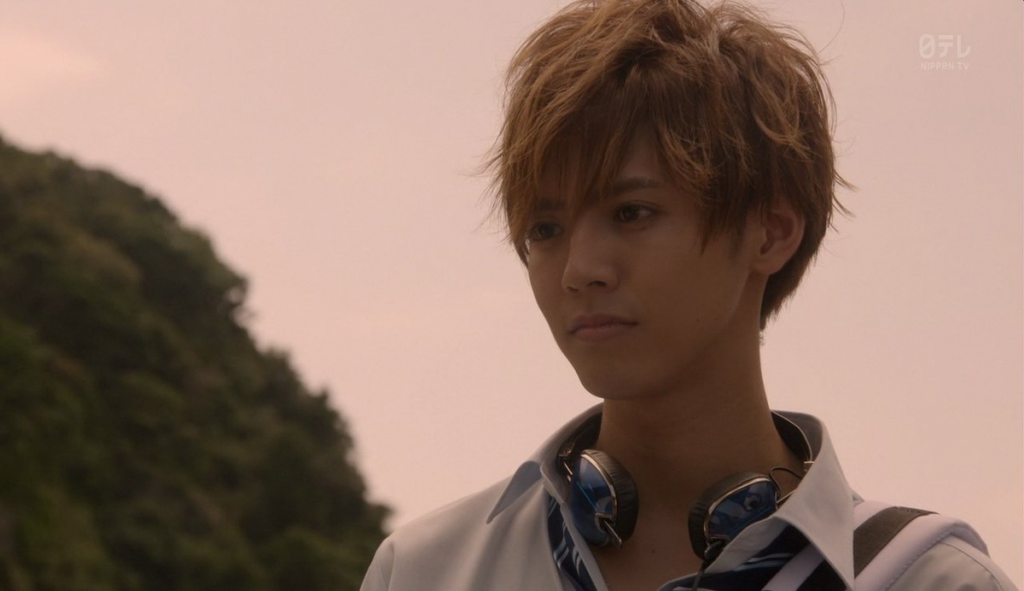 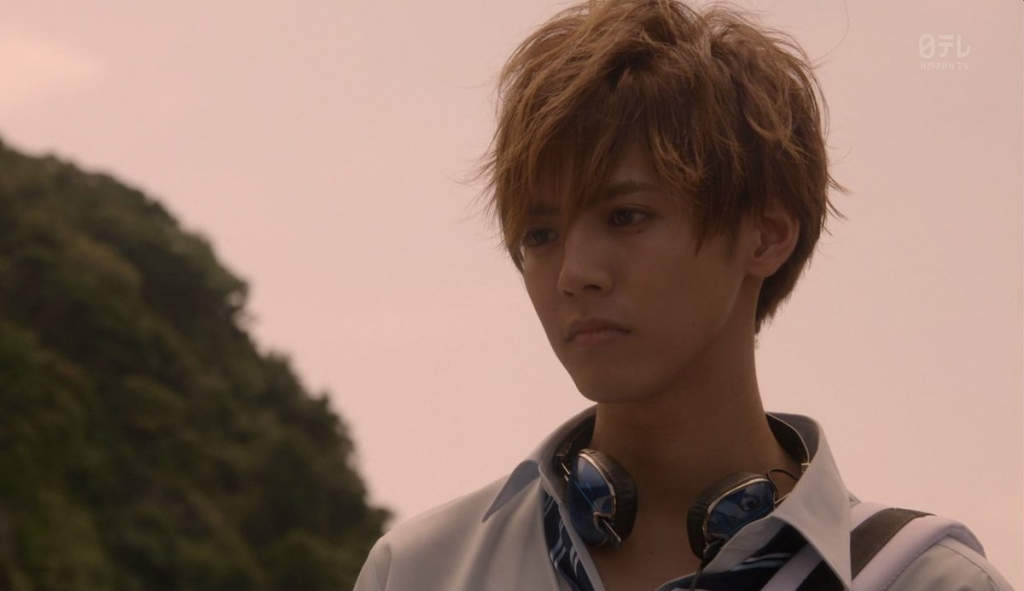 KLoulliet: She might have to learn how to change her voice/tone/accent. If she can lower her voice register, that would suit her but as it is right now, it still feels out of place.

Kaye: Yep… It’s mostly her talking that feels out of place and too forced.

50: THIS. She was ok only when she was very upset at her brother. The more of this ep I watch, the more I feel she’d be better as a mature and steady lady. It’ll make her tone down. She is overdoing it sometimes in this role. Restraint!!!!

Kaye: Well, she’s pretty much typical shoujo lead like this. It wouldn’t be that annoying if she could just put her own feel to it but it always feels so off. :/

Kaye: I always felt she did fine enough in Rurouni Kenshin, but that role was small + she had some freedom in a way I guess.

50: She seems to do fine when the role has legit fighting spirit. Not the cutesy type, the real type.

Kaye: Yep yep. She needs to stop being the “goody two shoes” so to speak. Give her some spirit. Yes, something like that. Ryota did a lot better with the different sides of his character while she’s the experienced one. Most of the other things I’ve seen her in are just all the same. There’s no identity or feel in it. Hope she proves me wrong one day but I can’t see it happen soon.

KLoulliet: I have to agree.

50: Ryota is a bit awkward still but quality more consistent. Tao is running from awful to legit good in a few seconds. Gotta admit her scene when she was upset with her brother was good though.

Kaye: Definitely! But that was about the only part where I went “YES! ACTING!” Ryota was overall consistent. Not the best but he’s got time to improve. Meanwhile it makes me sad when people who’ve been acting for so long still can’t manage to at least be a bit consistent :/

50: I can’t believe they made the character jump down from the bridge…The Hero’s Halo is too blinding. I thought Mahouka Koukou no Rettousei was the epitome of Gary Stu, but at least it was badass while this one is weird. 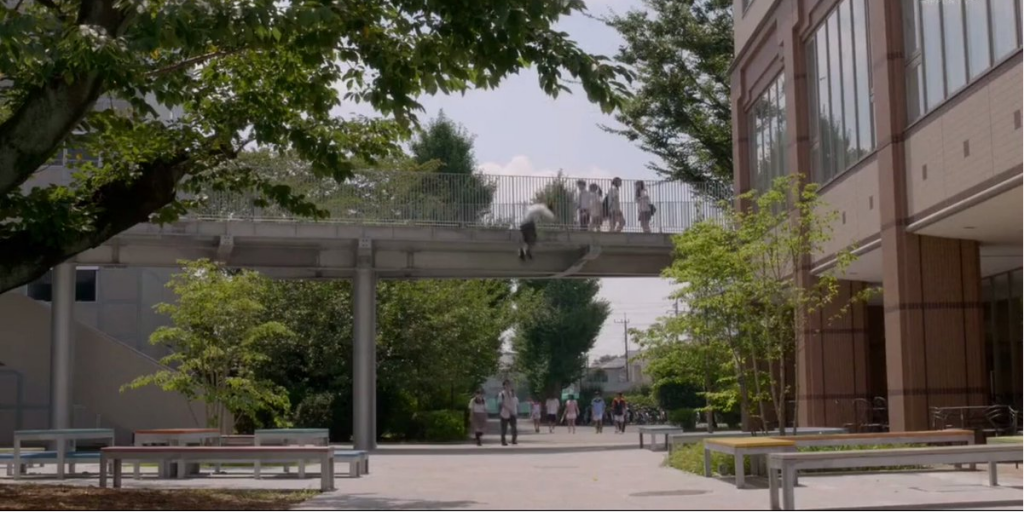 Kaye: Hey, got to use his parkour skills. 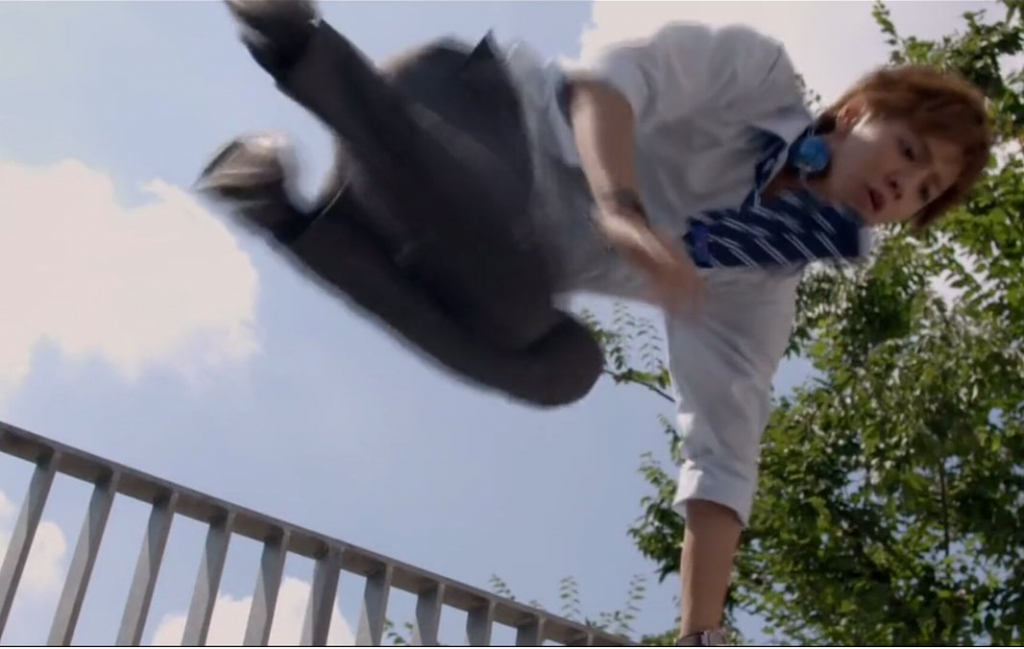 50: Laughing at story logic cos’ the brother’s legs didn’t break from impact and he could stalk right up. 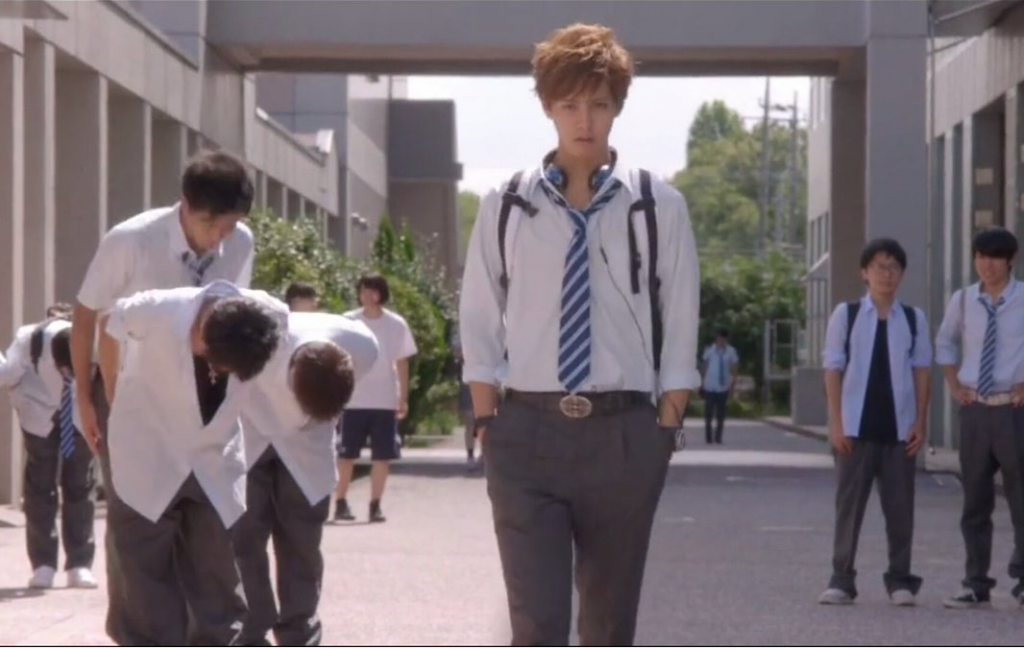 Kaye: THAT JUST MADE ME LAUGH SO HARD

50: HAHAHAHAHAHAHHAHA (also, Ryota’s eyebrow twitch when the dude checkmates him)

Kaye: I died a little there. His face.

Kaye: “Oh crap, this was not what I thought would happen”

50: Oh oh ohhh his expressions in this scene were quite good.

Kaye: In-between her lashing out on him, and this part, there were a few scenes where I almost felt sorry for the kid tbh.

50: This too. He was natural.  He did the doting and fond look that older siblings give to younger ones very well. 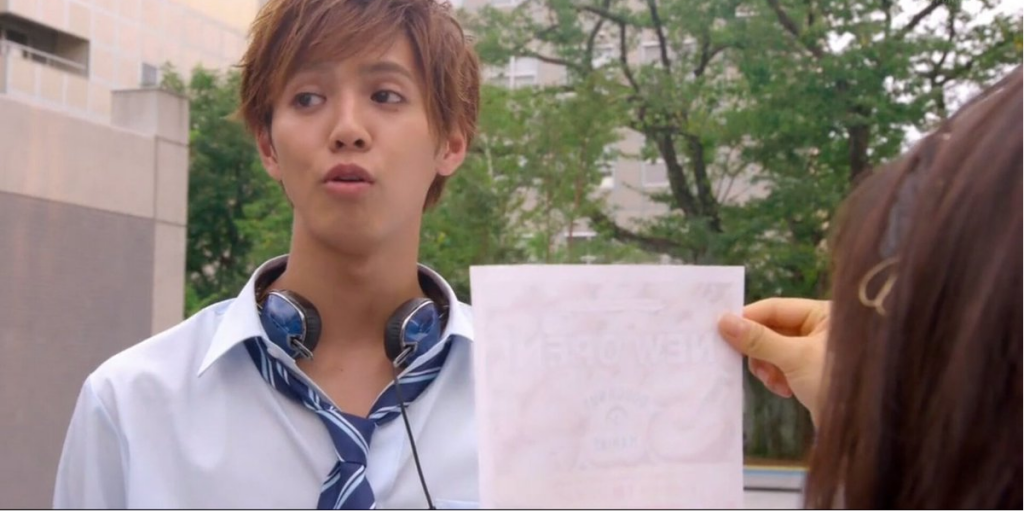 50: Kissing and touching a stranger…guy could be accused of molestation. Logic out of window.

50: She went all doki doki on him too omg what is wrong with this girl???

50: Sorry I choose Chiba for now cos he looks so cool and he is in black (y’all know I like guys in black).

Kaye: I (love black but) honestly can’t take Chiba seriously after those 5sec of trying to be cool.

50: The sunglasses scene though, pls, the airport is not so bright that you need them. ?

Kaye: But he’s got to be cool!

50: One reason the manga was disturbing was that she felt so much like an object? And that it’s done in a way that makes it seem like all girls should identify with and emulate? Why did they have to do such a scene in the drama ugh. What a regression. Precisely the idea that it’s supposed to be “romantic” that leads to men growing up on such wrong stuff and leading to real world issues. “Hey, why do you not let me touch you? I know you like it” NOPE.

Kaye: It’s a very typical thing to do in these series, isn’t it? Though at least newer ones keep from it most of the times.

50: Indeed it is. Especially in Japanese print. Less so for drama these days.

Kaye: And with that I can only conclude our search for properly written and adapted shoujos continues as normal. Maybe I’ll get to finish the whole thing at some point.

3: EXILE TRIBE is a collective of LDH pop groups. Katayose Ryota is a member of GENERATIONS, one of its units.

4: In the Korean drama Boys Over Flowers, F4 is a clique of wealthy classmates consisting of the four best-looking and most powerful boys in the school. They make friends with the poor female protagonist of the drama.