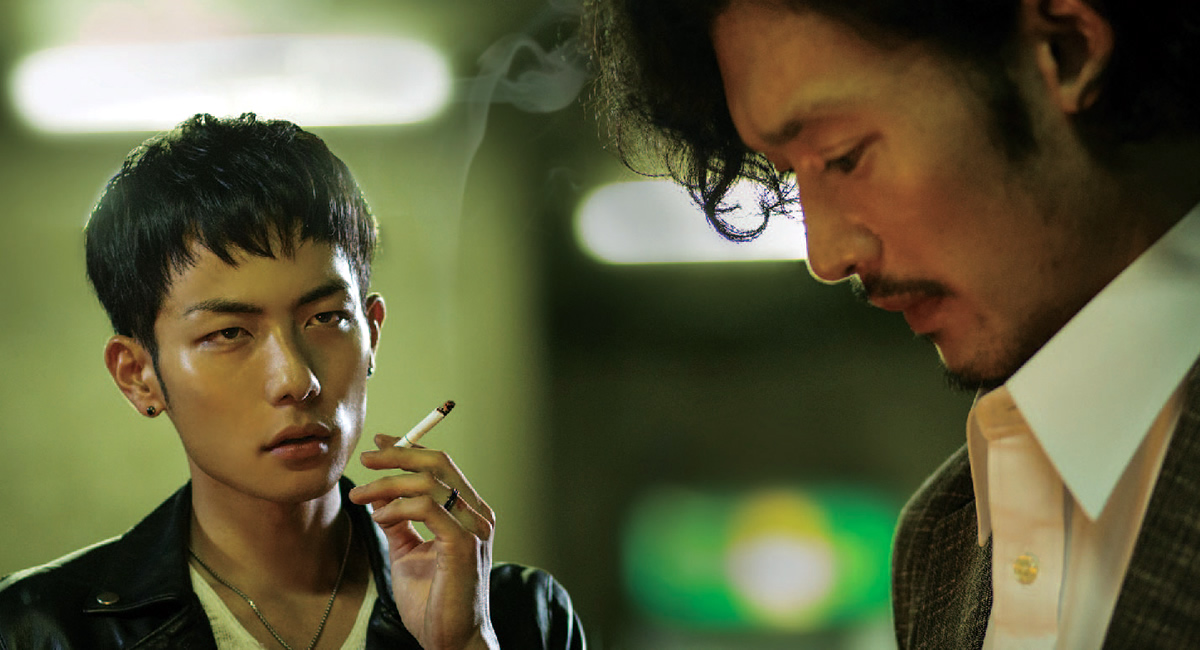 Double Mints is a film that places primary focus on the relationship between the two main characters who both, interestingly, go by the name of Ichikawa Mitsuo.

The opening scene captures my attention immediately. It is curious that Mitsuo (Fuchikami) is not surprised when Tanaka-Mitsuo calls him, despite the fact that they do not seem to have remained in contact these years. And more notably, he is calm for someone who just heard that his ex-schoolmate murdered someone.

Right at the beginning of this film, a realization already dawns upon me: Fuchikami-Mitsuo, despite appearances, might just be every bit as twisted as Tanaka-Mitsuo who on the other hand, coldly plots how to cover up his deed and lays out his plans to Fuchikami-Mitsuo as if he is simply drawing the grocery list. Tanaka-Mitsuo is the one who displays his unsettling traits more outwardly, whereas Fuchikami-Mitsuo can be considered the one with the more polished external appearance. As the film progresses, the bullied Mitsuo (for ease of reference) is shown to be the more cool-headed and unfazed one both in the past and in the present. While the bully Mitsuo is more inclined to go on a rampage and display his actions more loudly, the bullied Mitsuo tends to keep his composure and is surprisingly harder to read and more unsettling to deal with, to the point where one of the other characters commented that he was interesting. In hindsight, his ability to grit and bear with situations and keep his thoughts and cards hidden is probably a reason why he managed to pull through the time under the bully Mitsuo.

This film alternates between the past and present, slowly revealing the bits and pieces of the relationship between the two Mitsuos. And what an entrance into this story’s world! In the sections focusing on the past, Suga-Mitsuo’s eyes are like two bottomless pools that coldly bore into Kawagoishi-Mitsuo, and if one is to look carefully, there is hidden venom in it. The way Suga makes his Mitsuo come alive is phenomenal in his first few scenes and his presence heavy and powerful, through a mere look and the seemingly careless (though not nonchalant) and casual swinging of the towel. The director, through depicting Suga-Mitsuo doing this action, animates the scene without having to resort to blatant telling of story as although we see only the aftermath, the lines of the other characters and Suga-Mitsuo’s pose adds up to allow us to vividly imagine what happened without extra time wasted on dragging out such a scene while also building an impression of Suga-Mitsuo as being callous. This indirect manner gradually leads the audience, as their curiosity grows with each tidbit being released – a slow zoom-in, then a focus only on the feet – which forces the audience to scrutinize them, further driving home the acts that were done upon Kawagoishi-Mitsuo.

Suga-Mitsuo unabashedly defines unhinged with the way he laughs in utter glee at subjecting Kawagoishi-Mitsuo to his acts and breaking his spirit. On the other hand, Kawagoishi does a defeated Mitsuo very well – his eyes show that his soul inside was dead and his spirit was crushed, but Kawagoishi’s eyes were far from that of being deadfisheyes. However, it is a tad unbelievable that Kawagoishi-Mitsuo succumbs so easily to Suga-Mitsuo after only one case of bullying which did not involve (or at least we do not observe) any particularly violent or traumatizing consequences. To sell one’s agency this easily casts doubts and makes the bullied Mitsuo less compelling of a character as it requires a leap of logic to connect with what he is thinking. I wonder why after all the things that Suga-Mitsuo has inflicted on him, the bullied Mitsuo ends up falling for him…traumatic bonding and to show the bullied Mitsuo’s own twistedness perhaps? The film does offer plenty of chances to show the bullied Mitsuo to be more than a victim, so maybe this is indeed the case.

There is much usage of silence and the music is simple whenever it is used. In the scene where the Mitsuos plan to cover up Tanaka-Mitsuo’s deed, the low and hollow beats are occasionally punctuated by a slightly louder sound similar to that of a vocal/horn and their irregularity complemented with dark color tones of the scene and shaky perspective of a car-ride creates a sense of unease. The openings both in present and the past are rather subdued in tone and color, which strike a rather ironic contrast since the present involves murder and being accomplices in crime and the past involves traumatizing bullying. But such quietness in style is perhaps all the more suitable, for such a contrast further highlights the terribleness of such acts. It also allows for an undercurrent to run beneath the surface, which is put to good use by the actors, especially Suga, while the others needed a bit more time to warm up.

The way Tanaka plays his Mitsuo makes him more rough, violent, uncouth and even slightly sleazy whereas Suga does it with a hidden darkness and sinister craziness, and with a heavier silence cloaked around the character. The above, and the fact that both versions of this Mitsuo embody very different types and styles of the concept of ‘violence’ results in some difficulty in integrating the two images of this Mitsuo into one character and believing in it. Granted, the film does have a scene which might serve to explain the shift in the bully Mitsuo in the form of his past experiences, but that scene was more of a plot device to drive the story of the Mitsuos’ relationship than actually acting as a possible explanation of the rather observable shift from Suga-Mitsuo to Tanaka-Mitsuo. This is where the transition between Suga-Mitsuo to Tanaka-Mitsuo stumbles a bit, as there is a significant difference in the aura of the Mitsuos: Suga-Mitsuo is like a black panther, while Tanaka-Mitsuo is like a tiger. Suga’s Mitsuo is also done with more nuance whereas Tanaka comes off more as a typical aggressive rebellious guy that one sees often in Japanese dramas and films, the type that growls out their words and sports crew cuts. However, it is forgivable as Suga is a veteran particularly known for versatility and Tanaka does actually display commendable effort in holding up his part of the show, and he does have plenty of moments where he is at ease in displaying the relationship his character has with Fuchikami’s Mitsuo. His performance of Mitsuo also grows more layered throughout the film and he does a rather good job in transiting between emotions,  which makes me suspect that the directing and script might have played a part in the disparity between Suga-Mitsuo and Tanaka-Mitsuo besides the gap in acting abilities. Considering the fact that Tanaka only started acting in 2015, and that this is his fourth film and the first one where he is a lead, he is actually pretty decent and natural enough though a bit rough around the edges.  I look forward to seeing him take on more quality roles in interesting films so that he can obtain more experience and continue to increase diversity in roles, and hopefully, he will become more polished in terms of abilities.

There is a scene where Fuchikami-Mitsuo surprisingly turns the tables in their relationship, and although I know the focus is on the two Mitsuos, I can’t help but initially feel a bit disappointed that they let drop a potentially more human character moment for Tanaka-Mitsuo when he regrets his decision to murder the woman in favour of cutting it short with Fuchikami-Mitsuo’s action. Nonetheless, Fuchikami-Mitsuo’s actions are loaded with meaning in the context of this film, showing the oddness of their relationship and further highlighting (if you happen not to have already felt that way at the beginning) Fuchikami-Mitsuo’s own twistedness. Tanaka-Mitsuo grappling with guilt and discomfort in later scenes also compensates for the lost moment mentioned above and if one carefully scrutinises the order of events, his internal battle is actually organic and natural, first from him appearing dazed and detached, which probably was him still reeling from the reality of what he did, to him talking about regrets, then moving on to him being fixated about what the Chinese call ‘定情之物‘ (an item that couples give to each other as a sign of love) and dreaming about the incident, to him finally taking action regarding his inner turmoil.

Someone who requires a special mention would be Takahashi Kazuya, who gives an interesting rendition of his character. Instead of the typical hotheaded/coolheaded extremes typical of the cop character spectrum, Takahashi’s officer is a shrewd and perceptive man, one who gives smiles without the expression truly etching into his muscles, like a predator setting sights on the hunt. His gaze is knowing and is such that it makes one feel hypnotized, which is perhaps the effect that the officer was supposed to have on the people he interviews during his investigations to make them spill the beans. He feels like a needle hidden in a ball of cotton wool; no matter how one pokes him, he just absorbs the external pressure, but his sharpness is hidden and letting down one’s guard around him would expose one’s vulnerabilities. Probably due to time limits, his character is not expanded sufficiently and feels unaccounted for in the latter half of the film, but Takahashi utilizes his gaze to bring out his character.

Slightly gloomy feel, but the atmosphere is more of cold than true gloom. Some questionable plot points here and there, but not so significant such that it affects general enjoyment. As a film that revolves so much around the Mitsuos’ relationship and is so character-driven, the actors’ performances are generally well done and the two sets of Mitsuo actors complement each other.  Individually, the parts of the film are good, but it requires more seamlessness in writing and editing for a more natural flow.