Halloween, miracles, and the next teen-angst saga courtesy of Demekin are the latest casting scoop we have for you! A Japan Times’ film critic rates The Miracles of the Namiya General Store a 3 out of 5 stars, and we’ll have more of that, plus Tokyo Disney Resort takes their Holloween celebration to another level by launching a photoshoot featuring actors Nakagawa Taishi, Yoshizawa Ryo, and Chiba Yudai ‘channeling’ famous Disney villains.

A special feature with interview appears at Japanese entertainment site Natalie. This gives us an opportunity to look at their young, exciting careers as actors as well. Let’s see…

Nakagawa Taishi is regarded by many, including Nikkei with an especially laborious statistics, as the top of his batch. While doing mostly commercial stuff – Re: Life, Kyo no Kira-Kun, Prison School, Waterpolo Yankees, and Your Lie in April – he is set to do, perhaps his most challenging role in the upcoming Kids on the Slope (together with Chinen Yuri and Komatsu Nana). However, said movie still centers on the ‘box office’ side. He has yet to match the kind of projects given to Murakami Nijiro, Shimizu Hiroya, and to a certain extent Kitamura Takumi who were given serious film projects attached to some of Japan’s acclaimed filmmakers including Kawase Naomi, Nakashima Tetsuya, and Mariko Tetsuya.

Perhaps his agency has a different career goal for him? However the reason, Nakagawa is a fine dramatic actor with a lot of potentials which he has proven for the past 2 years or so.

Kissing his agencymate in the Handsome show is not enough for #YoshizawaRyo as he channels Cruella deVille too! pic.twitter.com/mCg4T9w72u

Yoshizawa Ryo is fast becoming a favorite among local and ‘outsiders’. Aside from River’s Edge (with Nikaido Fumi), Anoko no Toriko (with Araki Yuko and Sugino Yosuke), he is also cast in Marmalade Boy (with Sakurai Hinako). Like Nakagawa, Yoshizawa’s acting resume is filled with commercial projects, but Yukisada Isao, the renowned filmmaker is in-charge of River’s Edge where Oryo will play a gay character who may be involved in a murder – that sort of role is enough to whet the appetite of more discerning movie viewers!

#ChibaYudai channels #KingTriton in Disney shoot! The ageless Yudai at 28 can still play high school kids up till today! pic.twitter.com/o1VlTCpu98

Chiba Yudai is the senior among the three and has amassed an impressive list of secondary roles, but has yet to do a project like the ones mentioned for Murakami, Shimizu, and Kitamura.

The three actors were last seen together in Fuji TV’s Waterpolo Yankees.

Demekin is Kentaro’s movie launch pad, which also stars Yamada Yuki. In the tradition of angst-filled youth drama where fights and gang rivalry are the issues of the day, Demekin has something to do with goldfish eyes…

In the first years of elementary school, Sata Masaki was bullied and called “demekin” (pop-eyed goldfish). Ｈe became conscious of his strength from the 3rd year on, started looking up to delinquents and now he’s about to make his middle-school debut…!? [source] 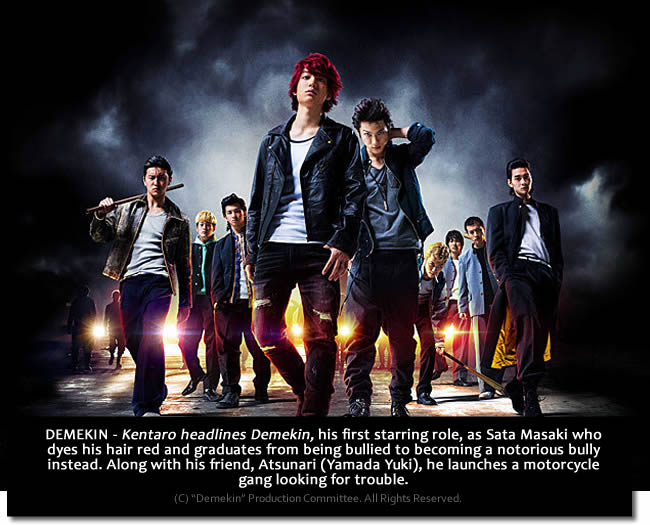 Shoji Kaori, writing for The Japan Times, says of The Miracles of the Namiya General Store: 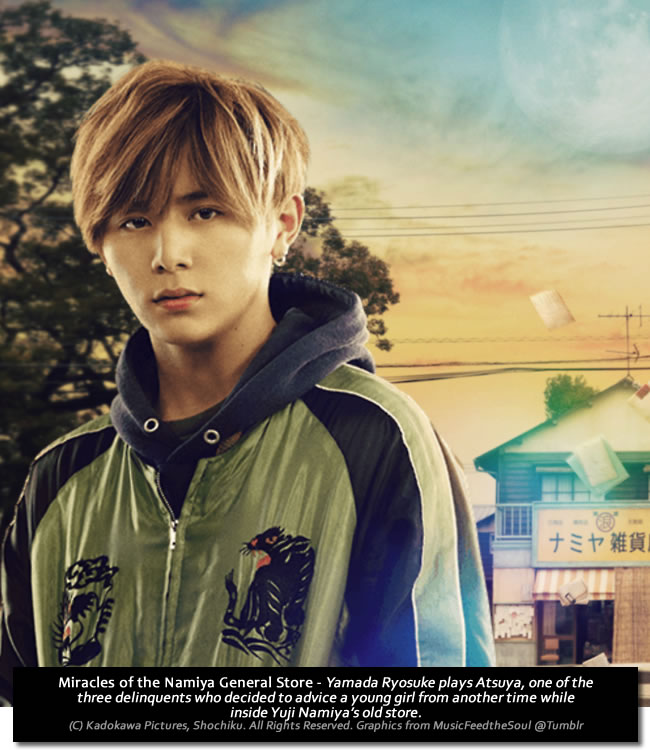 Japanese critics are calling “The Miracles of the Namiya General Store” the “most tear-inducing” story ever adapted from a Keigo Higashino novel. The best-selling author has penned such sensations as the thrillers “The Devotion of Suspect X” and “Journey Under the Midnight Sun,” but “Namiya” went a different way and instead demonstrates Higashino’s hidden flair for feel-good stories.

Brought to the screen by Ryuichi Hiroki, a master of the genre, “Namiya” comes off like the Japanese version of a Nicholas Sparks vehicle, minus the love story. There’s a relationship at the center, but it isn’t a romantic one: Sixty-nine-year-old veteran Toshiyuki Nishida pairs up with 24-year-old Ryosuke Yamada from idol-pop group Hey! Say! Jump. [read more]

The Hey!Say!JUMP actor was quoted as saying:

“Miracles of Namiya General Store” depicts a surreal story where they send letters across time and space, but the story is very truthful, and it will be difficult to depict the emotions of the character in a live-action adaptation, so at the same time, I feel very challenged [to take on this project]. Especially having the chance to co-star with Nishida Toshiyuki, he is a senior actor that I admire, so it is an honor for me to be able to co-star with him. Since I will be the one in the front line, while doing my best no to pull my legs, I will do my best to absorb as many lessons from him. I think that this work will be a movie that expresses emotions such as trouble, suffering, joy, and so on, so I would like everyone in the audience to be swayed by the story by all means. [ source ]

A lot of buzz is generated by Yamada Ryosuke via this film alone. His other film Fullmetal Alchemist is also making waves as it opens the upcoming 30th Tokyo International Film Festival.